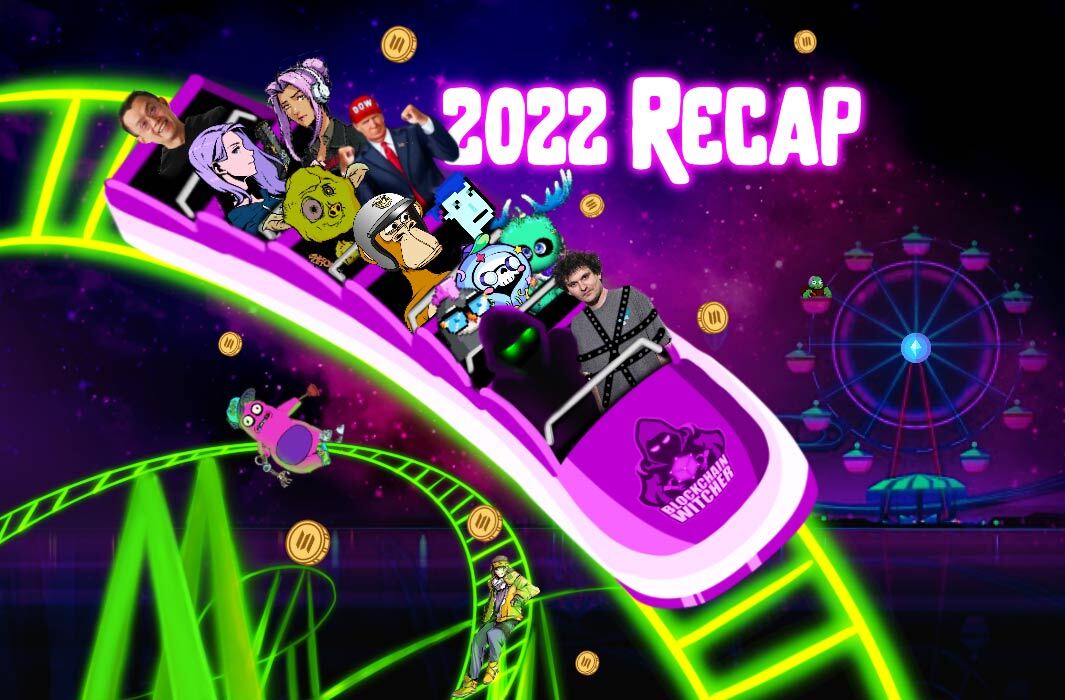 Standing on the heels of 2022 and looking forward to 2023, feels different. Reminiscing over 2022, I can’t find words other than, what a damn schizophrenic year it has been! It got us all on our highest tiptoes second-guessing and anticipating the market’s death… Was it a bull or bear market? Why were all those collections launching like an apocalypse? Full of drama full of conspiracy. Many people left the space, and many people joined. Many still hate NFTs and many still don’t know what the hell N, F, and T stand for! It has without any exaggeration been a rollercoaster ride. Let’s kickstart 2023 with a fun NFT recap of every major highlight in the year 2022. The events are categorized in major headlines, so feel free to skip to the segment you’re interested in (or enjoy the storyline). 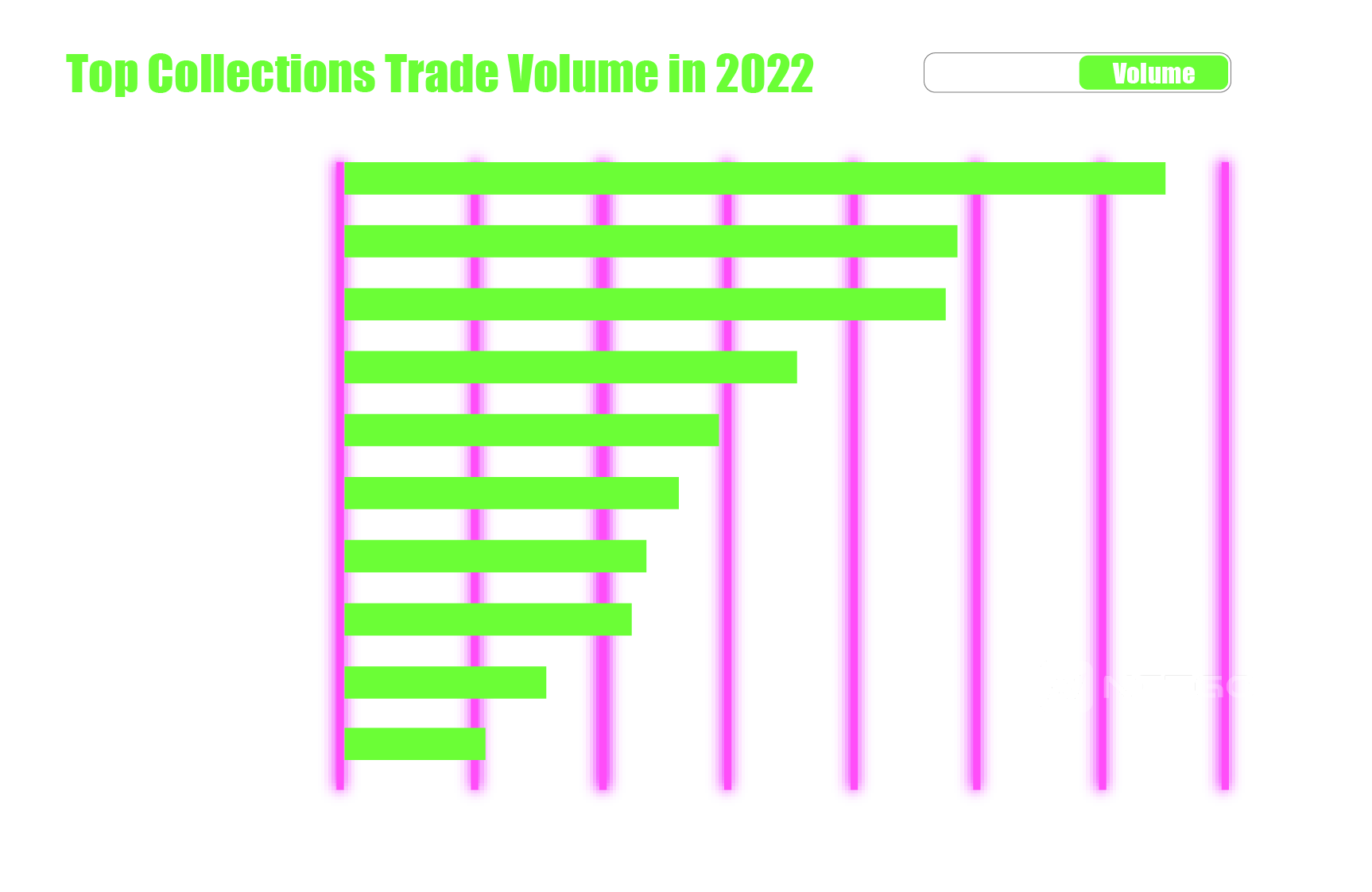 NFTs had a very good start this year and then went downhill from the peak. It’s like inflating a balloon too much till it popped. According to Google’s statistics, the worldwide interest in the term NFT reached its peak at 100% at the end of January 2022. From that high people gradually lost interest till reaching an all-time low between October and December. Sad but true. Google’s statistics also show that the countries that showed the most interest in NFTs were China, Hong Kong, Singapore, Macao, and Gibraltar. Fun fact, the U.S. and Europe didn’t even make it to the top 10 interested countries. Cool but why? 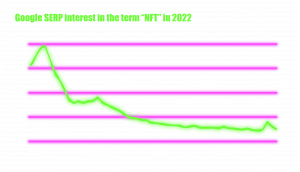 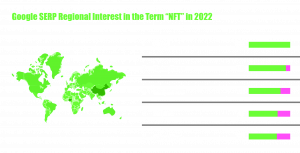 Looking back at this year is very confusing. How can NFTs do so well and so badly? We can see from NFTGo’s year analysis that the NFT market cap at the beginning of 2022 was approximately $9 M till reaching its peak in mid-February at $12 M then maintaining itself above the $8.9 M margin for the rest of the year. This is not that dramatic, however, the trade volume tells a different story. It peaked in January then lost some traction till literally booming in April at almost $13M. What the hell happened in April? (Spoiler alert: Otherside and Moonbirds). From there the trade volume just gave up on life fluctuating under $7.6M.

Now if we take a deeper look into which NFT category had the highest market cap we notice that PFP, Collectibles, Utility, Land, and Games were at the forefront. PFPs remarkably beat all the other categories. Hmm… why? ( It’s psychological, google it).

Now taking a look at the NFT holders and Traders’ Activity from NFTGo, the first thing we notice is an obvious increase in the number of NFT Holders. All in all, there was a general increase in the holder, trader, buyer, and seller activities. We can also see how in the first half of the year the buyers’ activity was very high, while the seller’s activity increased at the end of the year. This shows that many people lost interest in NFTs, as many people joined and still believe in them. So basically, everyone kept really busy. Which is ironic in a way, isn’t it?

It’s not a proper NFT recap without the drama NFT marketplaces brought. OpenSea has been taking the reins since 2017 and this year four brave warriors ought to challenge it for the throne, Looksrare, Gem, X2Y2, and Blurr.

The efforts of the new marketplaces are to be applauded, however, when we look at the numbers throughout the year, OpenSea’s weekly trade volume remained topping the charts. Blurr marketplace is insanely hyped and sought after by professional traders, so the outlook for 2023 is: will Blurr outrun OpenSea? We have to wait and see. (pun not intended)

The debate over creators’ royalties is like a cockpit fight between traders and creators. Creator royalties are probably the favorite part of every artist in the blockchain, unlike traders who dread paying for that extra money. If creators are getting paid on the primary sales, why should every trader keep paying them a cut every time their work is sold? The blockchain protocol doesn’t yet force paying royalties (as it’s almost impossible), so it’s up to the secondary marketplaces. It’s a moral issue at this point, so let’s recap the NFT marketplaces that took their stand.

It seems like for the year 2022 the royalties debate can’t take a proper side between traders and creators. All marketplaces, except OpenSea, are trying to please both parties, so we just have to wait to know the ultimate fate of these royalty fees – who’s keeping score anyway? However if the common consensus is to eliminate creators’ royalties altogether, this leaves the future of NFT creators and collections in jeopardy.

Despite common rumors that “NFTs are dead”, this year witnessed some of the biggest names hopping into the NFT rabbit hole. Almost all your favorite brands are on the blockchain. Here’s a brief recap of new NFT brands on the block this year:

It’s not an NFT Recap without the drama! 2022 was fully loaded with controversies, scams, failures, and successes. I’ll split this section into three categories: Drama highlights, Market Crash, and Blockchain Scams.

The most groundbreaking thing that happened in 2022 is the NFT market crash. So we must mention it in this 2022 NFT recap in a section of its own. It is the juiciest and most problematic “friend” feud. What exactly happened? First things first, it all took place in one cursed (or blessed?) November month.

What Caused the Market to Collapse?

All of this led to a domino effect of everything falling apart in the market.

How big was the FTX contagion? As big and deep as a black hole. All cryptocurrencies’ values dropped. All we saw in November were red charts pointing down. And, as a result, all NFTs prices surged. You can tell how hard the hit was from the blue-chip NFTs’ market cap crash.

1- BAYC : Yuga Labs Under the Microscope

Even blue-chip projects were affected. For the first time since 2021, BAYC’s floor price dropped under $100K. And, cryptopunks’ floor price surpassed BAYC’s after a head-to-head competition for a while.

In fact, the bored ape collection took a huge hit this year. While the floor price managed to bounce back up, a lot of people lost money. For example, Justin Bieber’s $1.3M Bored Ape NFT is now worth $69k only.

Moreover, in the infamous 2022, Yuga Labs, creators behind BAYC, were investigated after all assets’ dropped in value. Then, A-list celebrities were accused of ruining BAYC’s value. They were accused of receiving compensation for those promotions without disclosing such deals to their followers. Yikes.

It doesn’t end here. SBF was in fact a number one investor in the Solana blockchain. So, a lot of ‘liquidity’ Solana received was in FTX coins. Un, oh. What happened next? You guessed it, Solana’s price crashed dramatically. Just check the below graph, insane. Solana currently stands at $11.74 but it dipped below 10$.

Furthermore, due to the pitiful state of Solana, its two top projects, Y00ts and DeGods are leaving the blockchain in Q1 of 2023. Y00ts will be moving to Polygon and DeGods to Ethereum.

Will Solana ever recover from this in 2023? We can’t help but wonder if it’ll gain back its stability in 2023 or if it’s going to die out.

The blockchain/crypto world is never risk-free, as this year witnessed some of the biggest scams. Of course, the FTX scam tops the charts and that’s why it got a section of its own. So without further ado, here’s an NFT scam recap for this year:

Most Expensive NFTs Sold in 2022

It wouldn’t be an NFT recap without discussing the most expensive NFT sales that happened this year. Although the excitement dialed down on NFTs since January, reaching $6 billion in trading volume to almost reaching $1 billion in the third quarter of this year, NFT sales still made it to the headlines. Here are the most expensive NFTs sold in 2022:

Now I bet you’re thinking we missed out on some of your favorite incidents this year, but No! Here’s a recap of milestones that impacted the NFT culture:

So you’ve made it to the end. How did it feel seeing this year in one shot? The biggest irony of 2022 is that NFTs were supposed to be “dead”, especially on sales and chart performances, but actually, NFT hustling was more alive than ever! This year was very experimental, many brands and celebrities tried their chances with NFTs. I think that 2023 is very promising mainly because people know about the potential of NFTs now. They are more than a PFP, it’s a technological advancement that can offer so many things. So what does this new year have in store for blockchain and NFTs?

I’ll leave you with this thought. Until next time, keep it up for your favorite Chainwitcher.