All-Star Sneakers: The Weekend We’re All Waiting For! 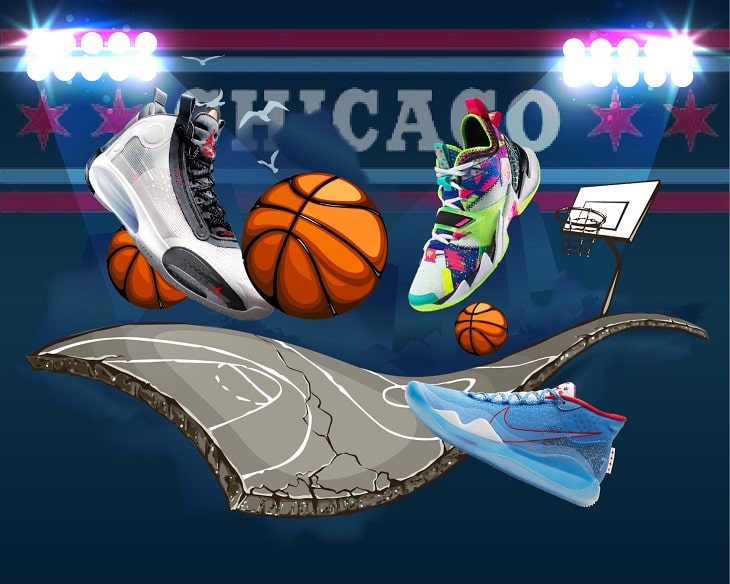 Every year, All-Star weekends showcase pure talents. Rookies, retirees, celebrities and players, all gather to give every basketball fan the show of the year! But it became much more than that. With the sneaker industry getting bigger every year, so is the importance of the All-Star sneakers. Finally, the hardwood floor became a sneaker war ground! Jordan, Nike, Adidas, Converse, and Yeezy are all in on it in February 2020, on different levels though.

So What Are the All-Star Sneakers Heading Our Way?

We can’t help but anticipate a LeBron release when we talk about the 2020 All-Star sneakers, can we? Nike and LeBron are not disappointing us at all with the Space Jam 2 inspired kicks! The latest Kyrie silhouette is dropping on All-Star weekend in a brand new colorway too! The red and gold kicks are a nod to Chicago’s team. Kevin Durant’s KD12 comes back in a light blue and red colorway! The design and colors all pay homage to the hosting state’s flag. Zoom Freak 1 “Employee of the Month”

And it’s another colorway from the “Coming to America” collection that the Greek freak Giannis Antetokounmpo relates to! The inspiration behind this particular pair is the fictional fast-food restaurant McDowell’s. And really? They’re one of the best 2020 All-Star sneakers!

The name says it all. This tie-dye colorway’s inspiration is actually Paul George’s favorite Gatorade flavors! It’s the Bulls’ hometown. It’s the All-Star weekend. So it’s pretty obvious that Jordan Brand is going out of its way with the release of the Jordan All-Star sneakers!

Can it get better than that? Can it? Not only the original 1985 AJ1 colorway but also the highly coveted Nike Air Ship are dropping in the “New Beginnings” exclusive pack! This pack is a tribute to Jordan’s beginning with Nike, and it does not disappoint. Well, is it really a Chicago All-Star game without the best Air Jordan 3 colorway out there? Nope, didn’t think so! It’s only fitting to have this colorway dropping in the 2020 All-Star weekend. In addition to men, lady sneakerheads are getting their share of All-Star sneakers! And what a share! The UNC to Chicago Air Jordan 1 is nothing short of amazing. (And we personally think they look even better than the previous Men’s patent version.) The third installment of the Jordan x Westbrook collab is dropping in two new colorways on the All-Star weekend! “LA Born” and “Jordan Unite Collection” are both colorful must-have kicks. Because two is better than one, two colorways of the youngest Jordan silhouette are already on the list of cool 2020 All-Star sneakers! The kicks will be dropping in a white “Jordan Unite Collection” colorway. The second pair is a special edition release that dons the black, white and red colors. The Jordan Unite movement is expanding in 2020! This time in the form of a collaboration with 8 different members of the Chicago creative community. Although no doubt all of the items will be very popular, only one collab managed to hype all the sneaker community. Yes, you got it. It’s the Off-White x Jordan 5 that is making the industry go crazy! The whole collaborative apparel and sneakers will be dropping on February 15 in the midst of the All-Star weekend hype! Not your typical Basketball sneakers, or Yeezys for sure. However, if Kanye’s known for anything, it’s for testing out new waters every now and then. And the basketball kicks’ images have been circulating for a long while now so let’s hope they do drop on February 14, 2020. Finally, Jordan brand might be the OG in on-court sneakers, but this doesn’t mean Adidas doesn’t get to give it a try too. It’s true, they’re not dropping a whole lot of All-Star sneakers like Nike and Jordan. However, the one basketball pair dropping on February 14 is celebrating the Chicago native Derrick Rose. It’s the D Rose 1 in the Simeon yellow and blue colorway. This year is obviously full of competition, and not just between the teams! People love looking at the sneakers and the surprises the All-star games hold for them. Sneaker companies are giving us just that, and we ain’t complaining! However, if you guys wanna cop, you’re going to need a bot. And that’s where AIO comes in!

Keep it locked on our blog for the latest sneaker news!