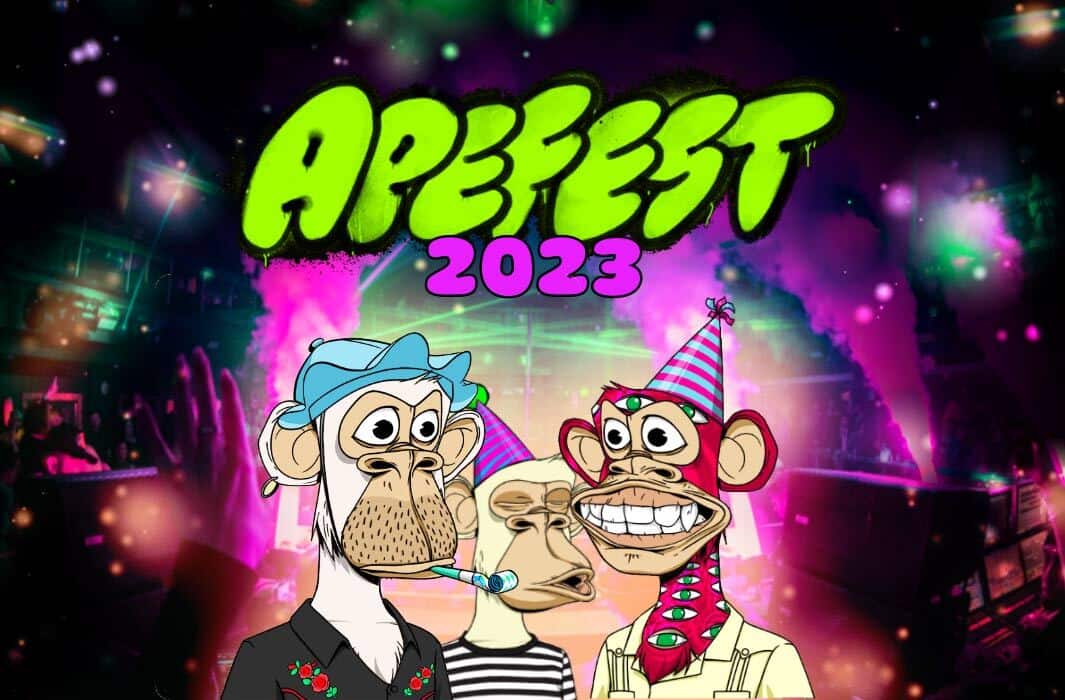 One of the biggest events in the NFT space has been the one BAYC holds. So naturally, we’re all hyped up about Apefest 2023!But the annual Bored Apes Yacht Club Festival will change its location this year.

If you’ve been in the game for a while now, you’d know that IRL events are a thing. Despite the common interest being virtual assets and Ape pictures, there’s always a physical return point.  The ApeFest usually took place during NFT NYC. However, MAYC and BAYC holders recently found out that Yuga Labs has new plans for 2023.

ApeFest is the biggest annual festival for BAYC and Mutant Ape holders. Hosted by the Bored Apes Yacht Club team, this festival features live music, an open bar, merch, art, and so much more. Last year, the BAYC co-founder suggested that ApeFest 2023 be digital and physical. The purpose of that is for those who can’t attend in real life can also enjoy the ApeFest festivities through the Otherside metaverse.

What is NFT NYC?

NFT.NYC is the most anticipated NFT event of the whole year. This event takes place annually in New York City each year. The first NFT.NYC took place in 2019, and with the NFT space booming in 2021, it quickly became the most awaited event of the year. This event helps bring the NFT community together with brands, creators, investors, artists, gamers, and NFT enthusiasts. NFT.NYC ‘23 will be taking place from April 12 to April 14, with many musical guests and public figures attending. Also, there will be many activities to participate in and so much merch to buy. So, hurry up and book your tickets.

Where is ApeFest 2023 taking place?

ApeFest 2023 is taking a different turn this year. And it will not take place during NFT.NYC, unlike the previous 2 versions. Which were a huge success making BAYC fans even more confused as to why the sudden change is happening. Blockchain expert and BAYC investor, JBond announced via Discord on Jan 5 that ApeFest will not be taking place during NFT.NYC, in April. No further information is shared yet, but BAYC fans were assured that they will have plenty of time to prepare before Apefest 2023 takes place.

The previous two ApeFests took place in 2021 and 2022. They both happened during NFT.NYC and were a massive HIT!

In 2021, on the second and third day, BAYC opened a pop-up shop in New York and transformed the warehouse into a real-life BAYC. The line to enter the club was loooong and some people waited 7 hours to get a wristband for the warehouse party and merch. The warehouse resembled a Bored ape yacht club with memorabilia and arcades decorating the space.

We are inside, check it out! pic.twitter.com/OCeLwVv9JZ

In 2022, notorious music guests and BAYC celebrity promoters SnoopDogg and Eminem were present during ApeFest and rocked the crowd with their hot music. The entry was exclusive to BAYC and MAYC holders and a handful of exclusive guests only. Moreover, the entry was 18+, and it featured free food and new performers every night.

To sum up, ApeFest 2023, whenever it will take place, will feature a ton of craziness and surprises. Where it might be a bit overwhelming to many. But, to others, it might be just what they needed to let loose and have some real NFT fun. So, even though we don’t have all the juicy details yet, we are definitely preparing ourselves for this year’s shenanigans and IRL fun!