Can You Hack A Blockchain? 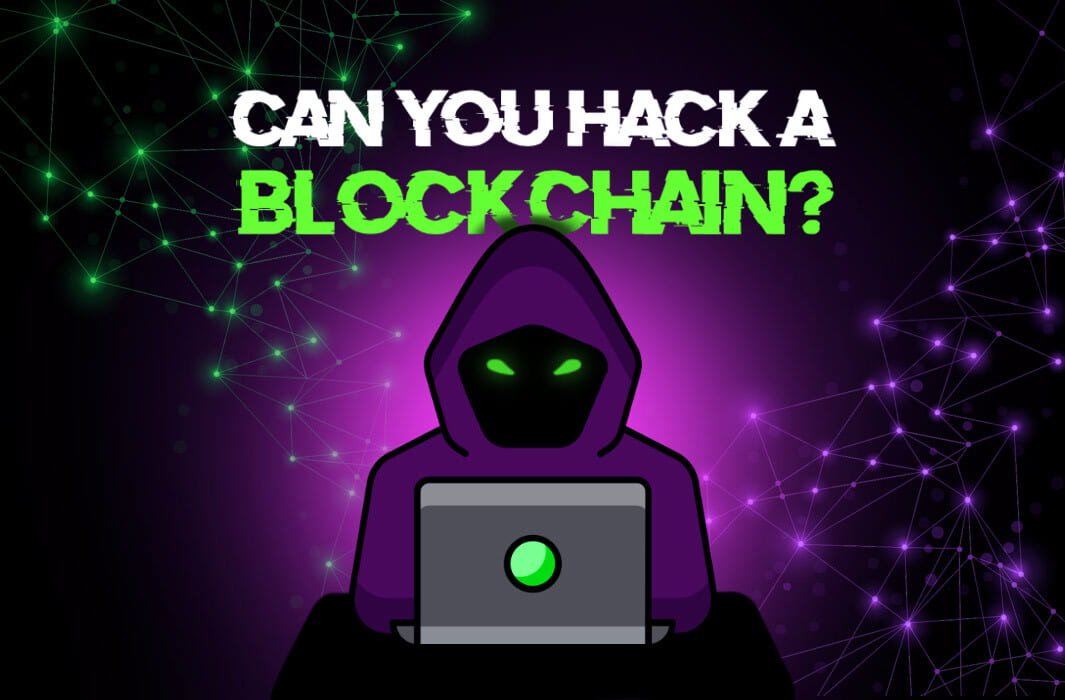 Bitcoin and other cryptocurrencies are built on blockchain technology, and several companies have adopted the use of cryptocurrency for financial transactions. Many organizations currently utilize blockchain for business activities, and their transactions’ records are processed through a computer network. Blockchain functions using a secure server, which eases verification, allowing users to deal directly without a third-party intermediary. But can you hack a blockchain?

Evidently, many people doubt the security of conducting financial transactions online since these ledgers are open to the public and not overseen by a single authority. In this article, we will be learning how someone can hack a Blockchain, how secure it is and whether these doubts are valid.

What is a Blockchain?

In detail, a Blockchain is the public ledger that cryptocurrencies use to keep track of and verify all transactions in the network. Anyone can view these transaction details; total amount sent, list of anonymous recipients, and the history of all transactions on the Blockchain. These public ledgers are updated automatically without any assistance or supervision. All transactions are immutable, verified and recorded mechanically using scripts and code.

How is a blockchain secured from hacks?

It’s difficult to conventionally “hack” an existing blockchain by adding harmful code or gaining access to the network and making modifications. The security of a blockchain, however, is not completely foolproof.

How does a blockchain hack happen?

Many people have given blockchain the moniker “unhackable” because of its reputation for impenetrability and security. Unfortunately, certain events have shown that malicious entities may breach blockchains under specific conditions. Here are several examples:

Miners are responsible for checking the authenticity of blockchain transactions throughout the verification process. Extremely unfavorable outcomes may occur when one or more hackers take control of more than 50% of the mining process.

One way this might happen is if a group of miners creates a new version of the blockchain (called a “fork“) in which certain transactions are ignored. The miners could then make a new, fake set of transactions on the split and call it the official blockchain. In addition, the hackers may now double-spend their bitcoin gains. Since it is difficult for miners to exert substantial influence over bigger and more complicated blockchains, 51% attacks are more likely on smaller-sized blockchains.

2) Errors in the creation of blockchains

A blockchain is sometimes created with a security flaw that hackers can discover and exploit. Larger, more complex blockchains are more prone to this problem. So, hackers who are looking for a way in may be able to see the holes and launch an attack. This has happened with blockchain-based smart contracts.

Smart contracts serve several purposes, including making the financial aspects of contract transactions and automating processes easier. A blockchain network can suffer a security failure, allowing hackers to steal from users unnoticed. The blockchain would be unable to record their fraudulent actions. Since blockchain transactions are irreversible, recovering stolen funds involves creating a fork that serves as the authoritative blockchain.

Coin trading platforms (exchanges) have been the target of several blockchain hacks. Unprotected protocols make it easier for hackers to access delivered data.

Open-source programming is a target for attackers. Criminals target crypto exchanges since a hack can earn them access to users’ fortunes. Here are some of the biggest blockchain hacks so far:

Mt. Gox was a 2010 Tokyo crypto exchange. It was formerly the world’s biggest cryptocurrency exchange, processing 70% of bitcoin transactions. 2011 saw $8.75m in bitcoin stolen. Exchange security was breached in 2014 despite ongoing attempts to prevent such incidents and about 615,000,000 bitcoins were stolen this time. The fraudulent bitcoins flooded the exchange. This was a serious bitcoin security breach.

Customers, suppliers, and partners sued the corporation after the incident. Mark Karpeles, the exchange’s CEO, engaged in a few lawsuits, because he didn’t deploy version control software.

Any developer could’ve mistakenly overwrite the site’s code, exposing the system. These lawsuits haven’t benefited users yet. The exchange plans to pay back its customers through a civil rehabilitation program at the Tokyo District Court.

Upbit launched in 2017 is a popular South Korean exchange worldwide. It became the world’s biggest crypto exchange by daily transactions in 2018. The exchange was attacked in November 2019. The thieves stole $45 million in a single transaction.

After the incident, the hackers shifted most of the crypto to other wallets to evade authorities. After a few months, the US department of justice identified two Chinese attackers. North Korean hackers were also involved.

Binance is a household brand in the cryptocurrency exchange sector. The exchange is the biggest bitcoin marketplace (by volume) and is headquartered in the Cayman Islands. The platform trades in more than 1,200 distinct marketplaces and provides access to more than 360 unique cryptocurrencies.

In addition, Binance claims it has established a comprehensive crypto ecosystem including trading, study, and education. However, a big security problem struck the market in May 2019.

All of the missing bitcoins eventually led back to a single Bitcoin wallet. The company’s SAFU (safe asset fund for users) insurance absorbed any financial losses incurred as a result of the theft.

How to secure your wallet and prevent blockchain hacks:

Cybercriminals attack crypto exchanges and wallets using advanced tools. Here are some ways to secure your wallet and reduce the risk of hacks:

1) Use a cold wallet

There are two types of crypto wallets:

Data theft is more probable with hot wallets. Cold wallets store coins offline and require deep technical knowledge to hack; and so are safer. Store your keys somewhere secure and private, because there’s no “forgot password” option for offline wallets!

Ledger is a great recommendation for a secure hardware wallet. You can keep your cryptocurrency’s private keys safe on an encrypted USB drive.

2FA adds account security. You get a verification code when someone logs in. This extra step makes hacking difficult.

Also, never reveal your 2FA code, OTP, or any secret verification code to anyone. The crypto exchange won’t ask for your credentials.

A wallet provider like MetaMask uses a 12- to 24-word seed phrase. You must input the seed phrase in the exact order to access your assets.

Moreover, there’s no “forgot password” option here either. You lose access to your wallet if you lose your seed phrase. You can save this seed phrase by writing it down offline in a secure place.

Can You Hack A Blockchain: Conclusion

As hackers identify weak points, blockchain attacks have grown. Hackers have stolen $2 billion in blockchain cryptocurrencies since 2017. This shows that blockchain is not a 100% secure. Finally, users should be very careful, particularly when dealing with exchanges.

Before implementing smart contracts or trading on an exchange, you must research the risks, threats and security measures. When it comes to the security of blockchain, it is important that users stay up to date on current information. Moreover, the developers and people in charge will continue to find ways to improve security.