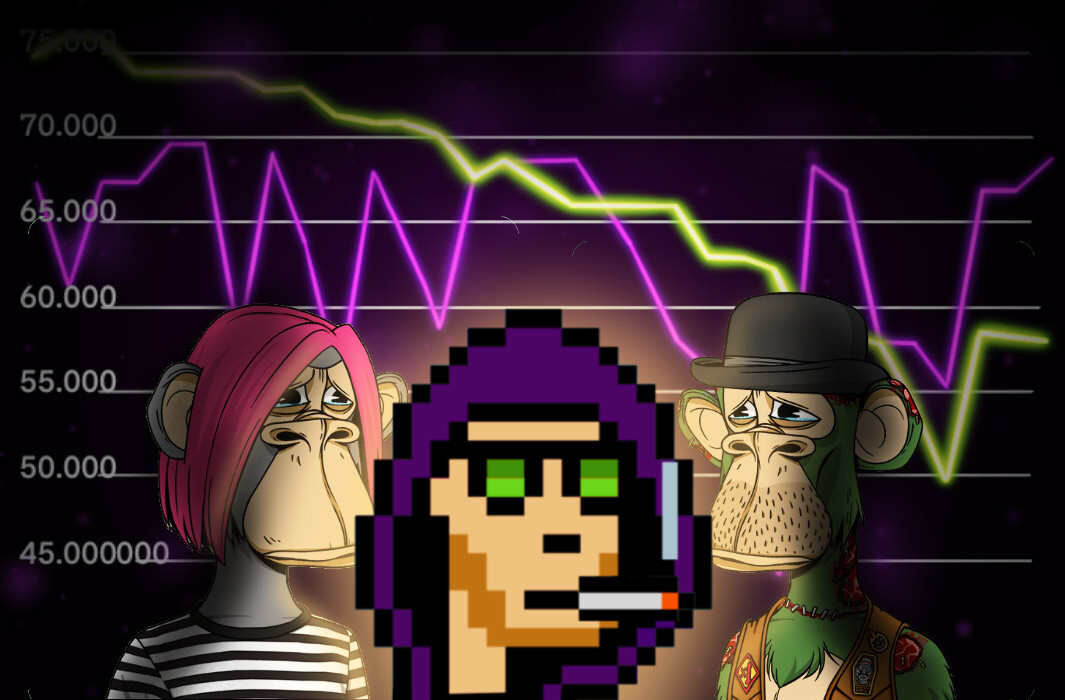 Everyone’s been crying ever since the nft market crash, except the punks. Cryptopunks floor price surpassed BAYC’s due to the latter’s drop. The punks are now the most valuable NFTs, in terms of floor price. Let’s dive right in the market’s analysis.

That is a notable decrease but given the state of the market, it’s only natural. Since the peak of NFTs in 2021, the non-fungibles have been struggling amidst loss in values and market crashes. Moreover, CryptoPunks’ 24 hour trading volume is 778.19 ETH with 11 sales. In the last 24 hours, the price floor of CryptoPunks is up 0.44%.

Cryptopunks’ floor price is facing a way less dramatic drop than BAYC’s (60%). In fact, Cryptopunks are doing much better. If you look at the chart below from coingecko:

Now, let’s take these charts and dissect them.

As you can see, for the past month, cryptopunks floor price and BAYC’s have been head to head for a while with the apes always leading. On November 4th 2022, the punks managed to surpass the apes leading with a floor price of 68.86 ETH when BAYC had a floor price of 66 ETH.

However, BAYC were back in the lead with major fluctuations from cryptopunks’ side. Up until recently, around November 9th 2022, where everything went downhill. As the NFT market crashed with the FTX drama rising, both projects experienced a drop.

The thing is, Cryptopunks managed to recover when the bored ape yacht club was still struggling. We previously discussed why the BAYC’s floor price is dropping. You can read about it here if you’re interested.

Now that we looked at the numbers, let’s check the people. Because these two projects are the most successful and valuable in the community, big investors usually own tokens from both. According to nftinit, 625 CryptoPunks owners have 1453 Bored Ape Yacht Club. Well, ironically, both of these projects are owned by YugaLabs. So, if anyone’s benefiting, you know who.

Also, just so you know how harsh BAYC’s floor price drop is, Justin Bieber’s ape that was once worth $1.3M is now worth $69k only. Moreover, in terms of community, NFT fans seem to be preferring cryptopunks over BAYC. Some even said, prior to the crash, that it was only a matter of time before punks surpassed the apes.

Been saying it for a while but it’s only a matter of time before Punks flip Apes again.

Overtime, I predict the gap between the 2 only gets bigger. Apes are dope but it’s impossible to compete with Punks long term imo.

Punks are forever. The ultimate grail for collectors. 🍷🤌

When punks re flip apes, the bull market officially re-starts

The NFT market is ever-changing, with unexpected crashes and surges every now and then. Cryptopunks floor price has surpassed BAYC’s after a head-to-head battle for a while. All we gotta say is, the market and NFT updates can be overwhelming especially lately. However, if you want to stay updated without losing your sanity, subscribe to our newsletter to always be in the loop!