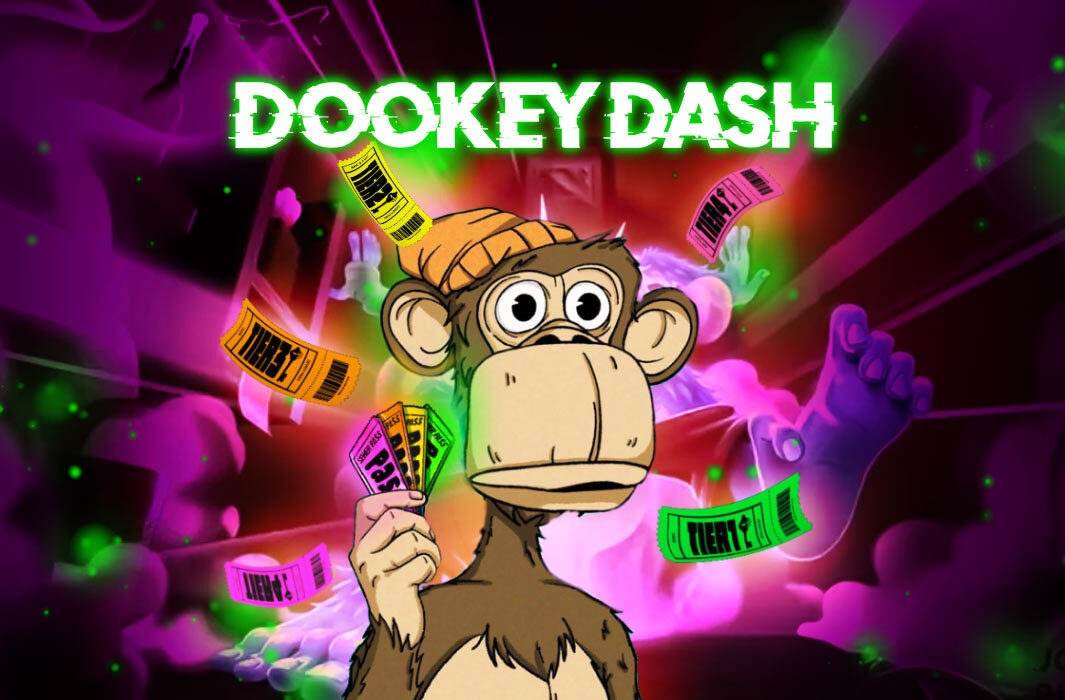 Before we get into Dookey Dash, let me put one thing out first. I’m not sure if this may come as a surprise but not everyone likes Yuga’s Apes. I agree that Yuga Labs cemented itself as a pillar in the NFT space, and the Ape fandom is beyond solid and dedicated. However, we must face the fact that the whole Ape ecosystem is controversial. We’ve already covered the new Ape game’s announcement and mechanics, you can check it out here.

In this article, we’ll get into how the Sewer Pass NFTs to Dookey Dash are doing. Also, get to see how the community as a whole is reacting to the game. Recently I’ve been a big fan of cliff-hang spoilers, so here it goes… The game is only fun if you’re bored (and rich) enough to burn a lot of money.

To play Dookey Dash, you have to mint a utility Sewer Pass NFT for FREE – only gas fees are required. Don’t get too excited though, to be eligible for a Sewer Pass NFT mint you have to have a Bored Ape Yacht Club and Mutant Ape Yacht Club NFT in your wallet. If you also have a Bored Ape Kettle Club (the ape’s fluffy companions) you can get a special pass. The only people who were lucky are those who already held Yuga’s NFTs. In this context FREE means paying a minimum of 85 ETH worth of BAYC and MAYC NFTs. OR buying the Sewer Pass NFT on a secondary market. At the time of writing, this pass has a 1.57 ETH Floor Price. Very free.

We now know why Yuga’s NFT sales were skyrocketing in the first week of January 2023. Like it or not, that is a really smart business strategy. They know how to make money, so get over it.

Sewer Pass claim is now open at https://t.co/CCLsz4krgi. Every BAYC/MAYC holder can claim one until February 8. There’s no rush or benefit to early claiming — if you have a BAKC, you may want to bring your doggo along. Sewer Passes are the only way to access Dookey Dash. pic.twitter.com/x2KALaFEcZ

The Sewer Pass NFT’s secondary market sales on OpenSea were instantly phenomenal. These passes were nearly one hour out and made over 1,500 ETH in trade volume! The number one trending collection on OpenSea today is Sewer Pass NFTs. At the time of writing, these passes have been out for 19 hours. So far, they made a bold total trade volume of 8182 ETH on OpenSea alone! What on damn earth? All for playing a game that lets you navigate the sewer to find a key in a but-hole.

It’s hard to classify Dookey Dash as a play-to-earn. Technically, the only blockchain thing about Yuga Lab’s new game is owning NFTs in your wallet to play. It’s even accessed through a normal website, you just have to verify owning the Sewer Pass NFT. So in terms of innovation and web3 advancement… it’s not THAT great of a leap. If we look at it in terms of story-telling or giving their fandom a solid engaging monetizable narrative, it’s awesome. If anything, Yuga Labs is a giant NFT brand because so many people LOVE their work. In my opinion, a brand with a solid fanbase can give out anything and make a big hit. I mean seriously, Dooky Dash is literally about navigating shit in the sewers to find the right but-hole… see where I’m going?

Where else can we get the community’s genuine reaction other than Twitter? Many, and I really mean MANY, BAYC enthusiasts were super psyched over Dookey Dash.

Sewer pass is the best integration of NFTs & gamification to date

Even the director of research at PROOF – creators of Moonbirds– took his thoughts to Twitter and expressed what a good move Yuga did for their holders. Many BAYC & MAYC holders flipped lots of money from this Sewer Pass NFT experience. But, there’s also a negative perspective to it. Wasn’t this a way to take advantage of those who are not involved in the Bored Ape ecosystem?

Yuga just gave BAYC/BAKC holders something that was quickly liquid for 7 ETH.

Gotta hand it to them. For long-term holders, this stuff really adds up.

Probably the biggest skepticism and backlash came from Bennett Tomlin, as he wrote a full-fledged Op-Ed explaining how the “Apes put shit in shitcoin” with this game.

I still cannot get over the rules for this 'game': https://t.co/1ZTansqbH2 pic.twitter.com/2V9cn5j0om

My favorite reply to the Tweet is most definitely this. It’s the most beautiful irony I’ve read.

Is Yuga Labs Worth the Hype?

Let’s be realists for a while. Do you really think that Dookey Dash is the best idea Yuga Labs could have come up with? From a marketing standpoint, it is downright genius. The royalty revenue alone from this project is insane. Even from the perspective of original BAYC holders, tons of profits were made. Also, the storytelling is indeed mind-blowing.

HOWEVER, not much effort was put into the advancement of web3 technology. For example, Azuki elevated the blockchain by introducing Physically-backed Tokens. Wolf Game is revolutionizing the P2E gaming ecosystem.

But, Yuga Labs know at this point that whatever they put out, will be consumed. I mean just like whatever MARVEL puts out, will become a blockbuster. So…Isn’t Yuga Labs exploiting its status by pumping NFTs for a game that is controversial in nature? Some people even say it’s too complicated and a waste of time.

I think it’s too cruel to judge now. They still have a bigger plan ahead, and we can only wait and see how this story unfolds.