Ethereum’s Merge: The Ultimate Guide of PoW vs. PoS 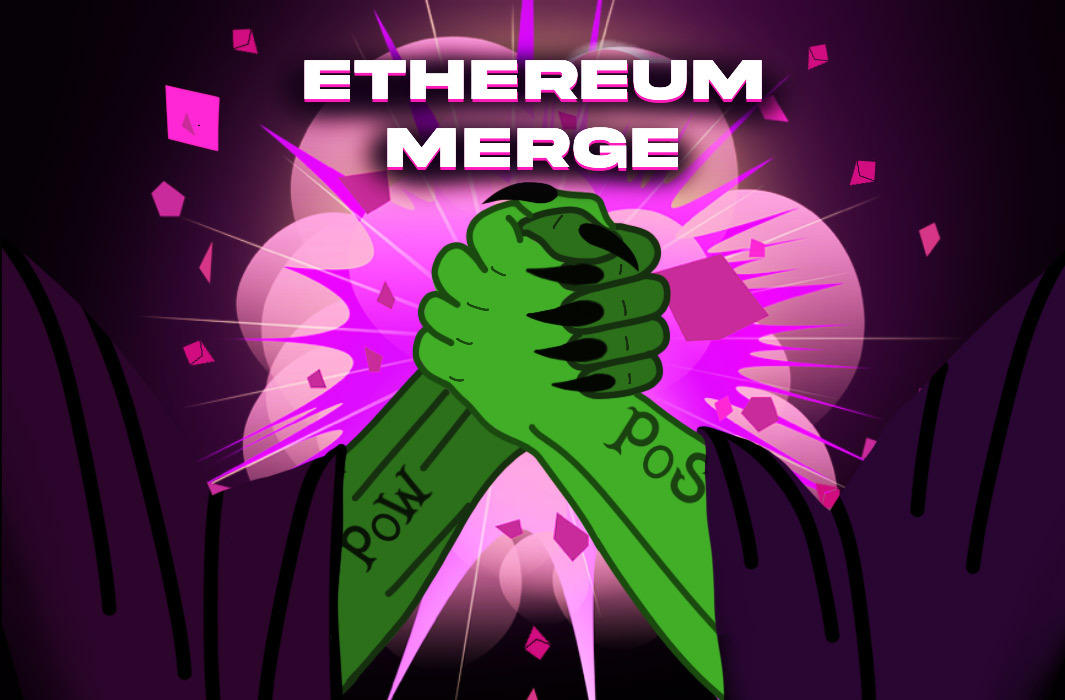 The Merge probably sounds like a fusion of two supernatural elements from a DC comic. However, Ethereum’s Merge is far from it. On September 15, 2022, Ethereum shifted from an energy-intensive technology to a more sustainable one. However, this major update was years in the making. Ethereum’s overhaul consisted of moving from Proof-of-Work to Proof-of-Stake which are consensus mechanisms that ran parallel since 2020. Before we dwell on the difference between the two mechanisms and how they affect the second-largest blockchain network, we’ll discuss a few things.

In order to truly understand Ethereum’s Merge, we should go over technicalities like how the blockchain even works, and what ‘consensus mechanism’ means. These are big words I know, but by the time you finish reading this article, you’ll be throwing these words into your next crypto conversation.

If you are a crypto enthusiast, you probably already know what a blockchain is and how it works. However, to all the Web3 newbies out here, I’ll explain briefly.

A decentralized ledger run by normal people is a sketchy concept. What’s in it for them? How can you trust them? Well, this brings us to the type of consensus mechanism applied.

Since banks are centralized institutions, they employ a pretty easy process of maintaining their database. Why? Because it operates through one central administrative authority that acts as the only validation of genuine records. However, in a decentralized blockchain where hundreds of thousands of volunteers operate the system of authentication, things can get a bit messy.

Therefore, in order to maintain the ever-so-changing state of the blockchain, and to validate each transaction as genuine, a secure and reliable mechanism needs to be applied. Here comes the consensus mechanism. The mechanism is a set of rules that verify transactions and endure the security of the blockchain. Thus, it’s a legitimacy verification method to assure the honesty of the participants.

Proof-of-Work is the first-ever consensus mechanism and it is certainly the most popular one. In this mechanism, participants need to compete in order to receive the right to add a new transaction to the blockchain. Miners need to compete with each other by solving complex mathematical puzzles using high-powered computers. The one that ‘wins’ the competition by providing the right answer, submits his version of the ledger in order to be checked by 50% of the community. After the verification of the authenticity of the ledger is done, it is added to the blockchain. The miner then will receive awards as cryptocurrency known as ‘block rewards’.

Proof-of-Work is a highly secure and reliable mechanism. In order for someone to rig the system, he’d have to control more than 50% of the blockchain’s network to perform a 51% attack. This is possible but requires a massive amount of energy to perform.

Because of its energy-hungry nature, this consensus mechanism is highly criticized for the negative impact it has on the environment. Not to mention the high operating costs. Ethereum used PoW consensus up until the Merge on September 15, 2022.

Proof-of-Stake, from its name, employs a system built on the process of staking. In the PoS consensus, miners no longer need to compete in order to get to submit their ledger on the blockchain. However, they need to stake their crypto assets for a random chance to act as validators, thus making their record transactions official. The more miners stake their crypto, the better their chance to win.  PoS miners will not receive block rewards for their effort, instead, they will earn a transaction fee.

The PoS mechanism is generally far less impactful on the environment. Since it doesn’t require energy-consuming computation, it is a more sustainable alternative to the PoW consensus. It is also a safer and more secure mechanism than PoW. Hackers have to own more than 50% of the cryptocurrency on the same platform, which is impossible. However, Pos’s criticism is that it might be heading into centralization, considering that only people with large amounts of crypto assets can validate the transactions.

Cardano, Solana, and Tezos all employ the PoS consensus along with Ethereum in its post-merge state.

So Which Is Better? 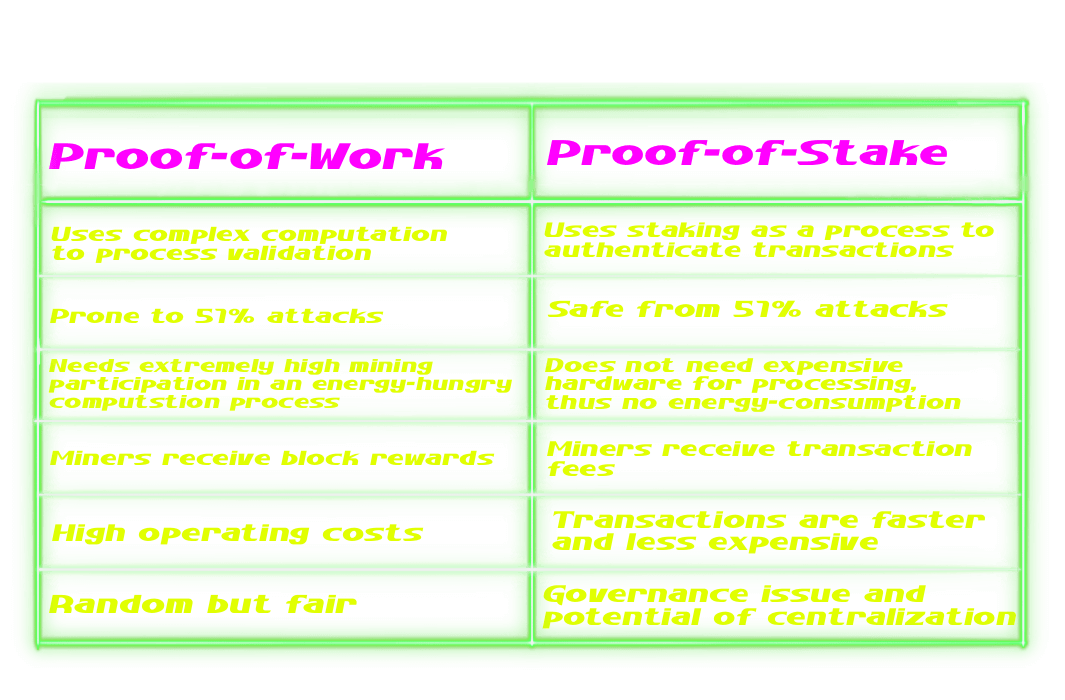 Proof-of-Work is an old, well-tested mechanism that has been used since the emergence of the blockchain. However, the impeccable damage it’s causing to the environment, high operating costs and low transactions are a major concern.  However, PoS is a mechanism that is trying to improve on PoW’s mechanism. Since the second-largest blockchain, Ethereum implemented PoS in its protocol, therefore it becomes clear to the community that the consensus is the better, more secure, and advanced option.

The Merge is Ethereum’s shift from the Proof-of-Work to the Proof-of-Stake consensus mechanism. Ethereum already had a PoS network but it didn’t serve as a transaction process. Ethereum then ‘merged’ its already operating PoW mechanism with PoS to become Ethereum 2.0. Ethereum’s aim is to create a more open, diverse, and decentralized blockchain that is energy-efficient.  Ethereum claimed that the Merge would reduce the blockchain’s carbon footprint by 99.95%.

The new Ethereum Merge brought with it sharding. What is sharding? It’s basically when a large dataset splits into portions. Moreover, the post-merge Ethereum becomes a shard of the whole in 64 parallel shard chains. The great thing about sharding is that it affects the scalability of the network. Meaning, the time-consuming data process will split across nodes.

Ethereum’s Merge will make the network more secure against hackers. Ethereum implemented a new penalty system that would punish hackers with penalties known as slashing. Therefore, if an attack occurs, which is hard using the PoS consensus, slashing will ensure the attacker is fined.

Unfortunately, for the time being, users will not notice any improvement regarding transaction speed. However, with the new PoS mechanism and sharding, the blockchain will be able to process 20K to 100K transactions per second. This will certainly clear up network congestion and lower gas fees. The bad news is, this process might take years to reach the maximum number of transactions per second. However, it’s a large step to improve the network’s processing.

The shift from PoW to PoS will drastically reduce energy consumption. That will put Ethereum on a higher pedestal of environmental awareness. Not to mention it will bring more investors into Web3 by legitimating the network as an eco-friendly system.

Ethereum’s Merge is just the beginning of a long roadmap of upgrades. The network is vigorously working on Ethereum’s improvement by planning a five-step strategy. The Merge, the Verge, the Purge, and the Splurge. After successfully implementing the Merge in the fall of 2022, Ethereum’s already onto its next milestone. The next big step is to enhance the scalability by sharding which will be in the Verge update. Ethereum will also work on enhancing network congestion and overall performance in later updates.

It’s safe to say that the blockchain is an ever-so-evolving technology, and it’s just at the beginning of its journey.