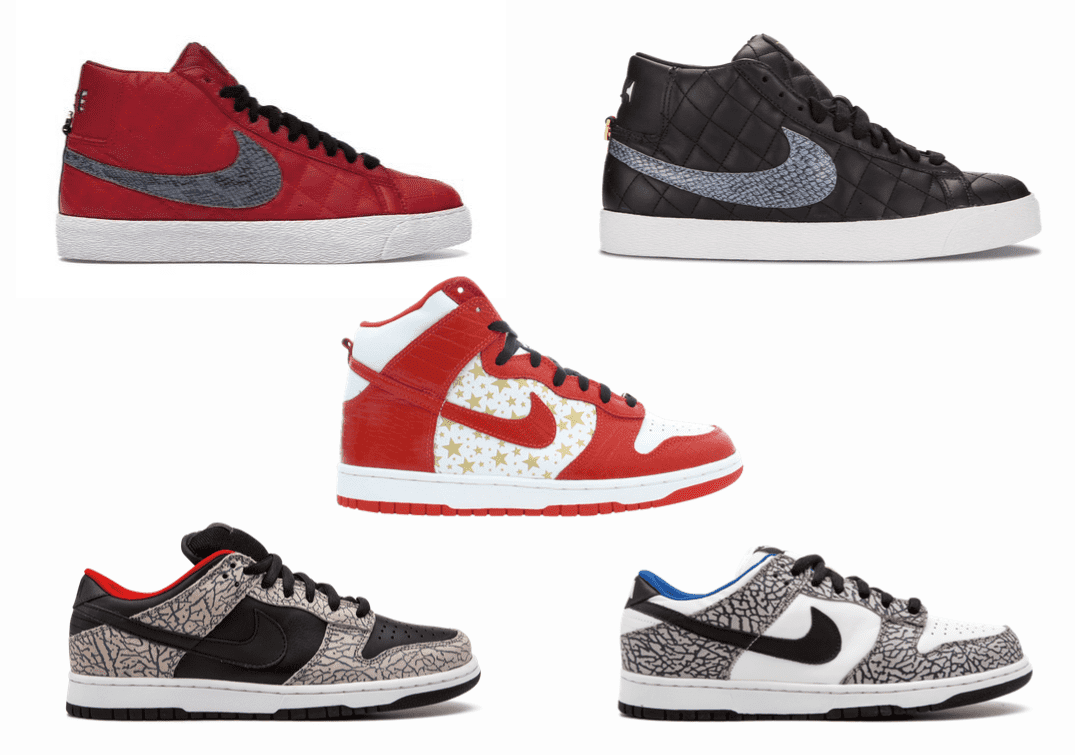 After more than 20 years in the domain, Supreme has become the biggest name in the Streetwear industry. One of the main contributors to that popularity is Supreme’s successful collaborations with companies that have a mass following. Supreme now has a cult following and has the most sought-out merchandise,  especially the Supreme sneakers.

The actual Supreme items’ retail prices aren’t THAT high. They’re even cheaper than other luxury items on the market sometimes! However, their rarity makes them super expensive on the resale market. That’s why Supreme items resell for tens of times their original prices. The same logic applies to their sneakers, and now, let’s look at the 5 most expensive Supreme Sneakers!

In 2002, Supreme collaborated with Nike to release the Nike Dunk SB Low “White Cement”. The Supreme sneakers featured a white leather upper wrapped in the well-known grey elephant print with blue lining and a black swoosh logo. There’s no Supreme branding on the shoes because collaborations weren’t really a thing back then. Only 500 Supreme sneakers were out for retail, which made them much much more valuable on the long run.

The Nike Blazer originally released in 1972 as the first basketball shoe with the swoosh logo. However, the Supreme collaboration in 2006 was a turning point for these shoes. These Supreme sneakers are inspired by 1980’s fashion and feature golden detailing, quilted leather uppers, and a snakeskin swoosh! So retro right? To top it all off, a Gucci inspired heel strap joined the mix.

Just like “White Cement”, the black colorway of these supreme sneakers featured the same silhouette. However, the only two differences were the leather color which is black instead of white and the red lining instead of the blue. 500 pairs of these shoes were released, and today, a pair of the “Black Cement” will cost you a small fortune.

The 2003 Supreme sneakers were the second collaboration between Supreme and Nike. The shoes featured golden stars printed on white leather on the lateral sides of the shoe along with a red crocodile-textured overlay. These babies are available on the resale market for 20 times their original price!

The black Supreme sneakers have the exact same features as the red colorway, with a quilted leather upper instead. The whole shoe is inspired by fashion houses like Gucci (the heel strap) and Chanel (the quilted leather). When released, the shoes retailed for $180. However, if you want to own a pair of the black Nike x Supreme SB Blazer now, you’ll have to pay a whole lot more than that!

We might have only mentioned five, but the list of Supreme Sneakers’ crazy resale prices goes on and on. The rarity of the Supreme items almost always turns them into collectibles and people ARE willing to pay that much. And what if the Supreme sneakers were a Nike collab? Well, that certainly makes them even more sought out!
If you’d like to have your own Supreme items for retail price when they drop, you definitely need the Supreme bot.