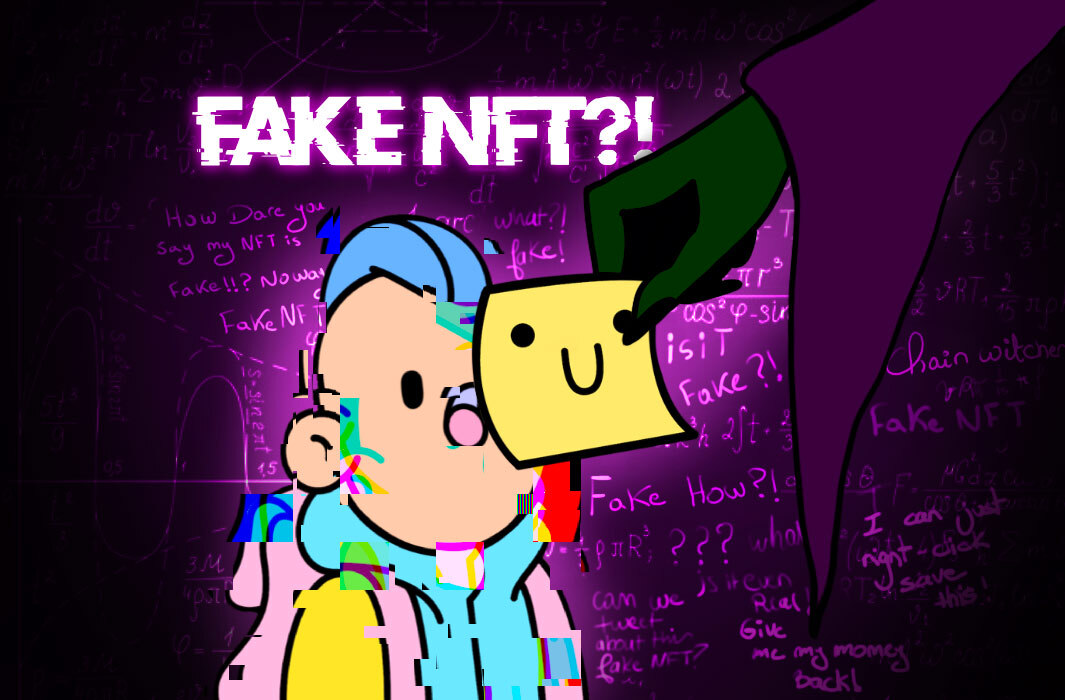 It’s one thing to buy a valuable NFT that you can flex in front of your crypto friends, but it’s another thing to spend your hard-earned money on an NFT that is simply FAKE. Is it the end of the world if you get scammed into buying a fake NFT? Probably not. Or maybe? Depends on how you feel about your money residing in the scammer’s wallet laughing at your misconceptions. But don’t worry we’ve got you covered!

The endless world of NFTs is still in its early stages. That means newcomers could get easily lost in the complex intricacies of the blockchain. Unfortunately, scammers see this as an opportunity to trick newcomers into buying fake NFTs. So, if you are a freshman in the school of NFTs, there’s a high chance you’ll get scammed if you don’t learn how to spot a fake NFT. However, if you want to elevate yourself into a fake NFT detector and be a fellow graduate, we’ve got the ultimate Fake NFT 101 textbook.

NFT mechanisms and how they work are a pretty heavy subject for someone new to the blockchain playground. Thus, it’s hard to know what a real NFT looks like, let alone a fake one! So in order to proceed with spotting a fake NFT, it’s better to spend time studying the fundamentals of NFTs. Here’s an introduction to NFT Basics.

In short, NFTs are digital assets that reside on the blockchain. That means they are a non-fungible transaction. This trait has led to many arguments if an NFT could be duplicated in the first place. Some argue that since NFTs are easy to create/mint, they can be surely counterfeited. While others argue that their non-fungible trait makes them immutable and unchangeable, thus you can’t make the same NFT twice.

However, faking an NFT is not about duplicating it. NFT scams are ploys in order to trick people into:

Anyone can thus fabricate a fake NFT, a bogus NFT drop, or plagiarize an existent collection. Unfortunately, there is a HUGE number of fake NFTs on Opensea. In fact, research made by Yahoo Finance shows that NFT scams “have increased by 400% in the UK between 2020 and 2021”. And looking at how NFTs are doing, scammers will probably take advantage of the falling market while they can.

There is no concrete way to verify their authenticity. However, you can still look for signs that can inform you about the legitimization of an NFT you want to invest in.

If you fall for a scam and end up buying a fraudulent NFT, you probably will NEVER get your money back. All you can do is sit around with a stolen NFT or even an empty file and question if it all was a dream. In order not to find yourself in that tricky situation, here’s how to spot signs of a fake NFT.

You probably should avoid plagiarism like the plague. Copyright infringement is a thing in the NFT world. Many scammers steal artwork from other artists and sell it as their own. So, the best way to see if an image of the NFT in question is plagiarised is to do a google reverse image search.

All you have to do is download the image of an NFT and upload it to google reverse image search. If a similar image appears, check its origin. If the image comes from a different website with clear authorization, it’s probably fake and you shouldn’t buy it.

Opensea has started taking action against stolen art by removing it from the market. That way it will limit fraudsters from profiting off of someone else’s work.

Look Out for Scammy Websites

Phishing is a common scamming technique. Phishing is a type of cyber attack that sends fraudulent messages as popups to retrieve sensitive information. Therefore it’s a perfect scam opportunity for scammers to gain access to your crypto wallet. How does it work? It usually takes the form of phony popups that lead to a fake website. The website then gains access to your personal information such as your name, address, and sometimes your security number. In this case, it will get access to your crypto wallet and steal your NFTs and cryptocurrency.

In order to avoid getting redirected to these phony websites, make sure not to click on anything that looks suspicious.

Some fake websites also stage themselves to be other official NFT websites. The phony website will eerily look similar to the legitimate website in this case. However, you can still differentiate between the two by making sure you’re at the right URL. The address of the website should match the official website’s URL in its entirety. But mind you, you have to look closely because fake websites tend to change only one character in the URL.

Let’s be honest, if you get a DM on Discord telling you that you got on a whitelist for an upcoming NFT collection for no reason, it is probably a scam. Scammers go on Discord all the time, disguising themselves to be a member of an NFT project and offering people opportunities that are just too good to be true. Beware to open any suspicious-looking DM, it will probably lead you into purchasing a fake NFT.

The Discord DM stunt is the most common type of scam. So be on the lookout for any questionable Discord messages.

Rug-pulls are a type of NFT scam that is maybe hard to notice at first. Rug-pulls are when someone advertises an NFT collection as a legit project, asking people to raise money for a project that is simply never going to happen. The tricky thing about these scams is that they sometimes seem legit. However, you can still spot them. Make sure you keep an eye on the project’s social media accounts. Scammers will most likely leave signs that the project in its entirety is fake. Sometimes people will leave comments such as sam or rug-pull to warn others.

NFTethics and Rugpullfinder are Twitter accounts that sniff out the nonsense for some NFT projects and warn the community about the scammy rug-pulls.

Although this guide will help you identify fake NFTs from real ones, it is not a guaranteed outcome. It is still up to you to be alert enough not to fall victim to the hands of scammers. However, if you educate yourself enough about how NFTs work and get involved within the NFT community, you’ll become more observant and vigilant about NFT scams. You have to remind yourself however not to distrust the whole NFT community. A few bad players don’t make up a bad team. In each industry, organization, or even within the government, you’ll find scammers and manipulators who try to ruin the system. This also applies to the blockchain space. You just have to be on the lookout for anything malicious.