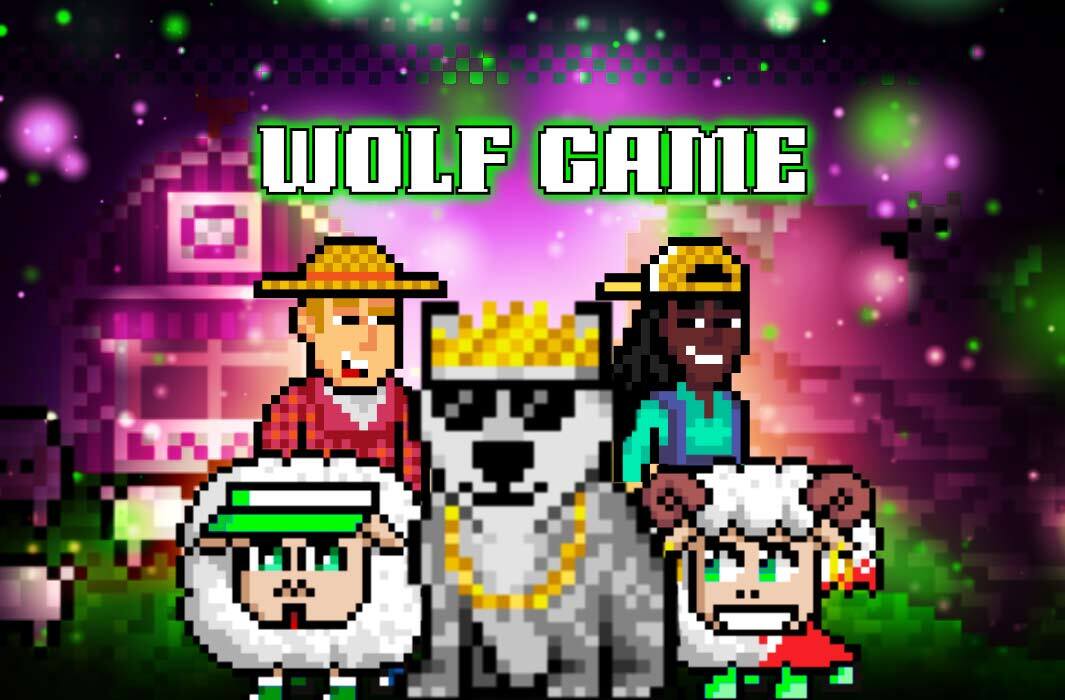 According to Absolute Researcher’s study, the global Play-to-earn NFT games market size was estimated to be worth $776.9 million in 2021. They predict this size to increase to $2845.1 million by 2022-2028. So, despite all the genuine hate and skepticism, Play-to-earn or blockchain gaming shall never go out of style. If you’re curious, the blockchain-based P2E concept first started with Huntercoin back in 2014 – after Bitcoin’s pump from $13 to $1100 in 2013. The P2E concept took some time to simmer with people until the boom in 2017 with games like Cryptokitties, CryptoBots, and Spells of Genesis. And can we ever forget the unwavering dominance of Axie Infinity that hit the world in 2018? Now, there’s a new kid on the block, that is stealing the spotlight. It seems like Wolf Game is here to change crypto gaming and cement itself on top of its predecessors.

Read on to learn all about Wolf Game’s previous triumphs, failures, high-profile supporters, and mechanisms. I guarantee at the end of this comprehensive guide, you will know for sure whether you should play it or not this year.

What is Wolf Game?

First released in November 2021, Wolf Game took the internet by storm with its concept. Based on the Ethereum blockchain, Wolf Game is a combination of play-to-earn, DeFi, and old-school strategy games. The goal of the game seems simple, gather as many WOOL as possible. The interesting part is how to compete for WOOL. That’s why the only native token in the whole ecosystem is $WOOL.

In summary, there are 101 Communities, each having its supply of land plots. Only 20,000 Land plots will ever exist in the Wolf Game ecosystem where each land is an NFT. This limited supply provides scarcity.

There are three main character categories that can be bought as NFTs:

As of now, no one knows whether there’s a single person or full team behind the game. The closest thing to a founder we have is The Shepherd, who most like to call Shep. All announcements and game rules come directly from The Shepherd via Twitter. All the lands, sheep, and wolves are overseen by The Shepherd. This mystery and game concept, I think, is what got everyone so hooked on the game. Whoever Shep is, knows how to engage an audience, like a ringmaster, and honestly job very well done. 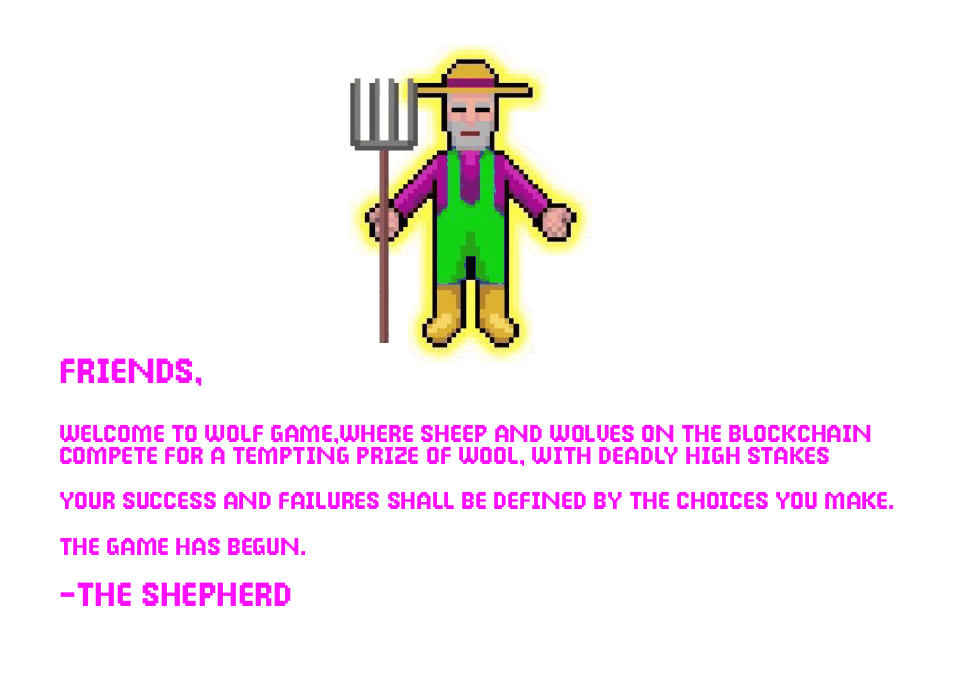 How Does the Wolf Game NFT Strategy Work?

After accumulating the WOOL, sheep could either be:

New animals could be minted using $WOOL with a 10% chance of it being stolen by a staked wolf. The rare the Wolf is, the higher chance the holder has of stealing a new mint. Obviously, that’s why wolves are more sought after since they control the game.

However, there’s another perspective to viewing who controls the power in the game. If all the Sheep decide to hold their WOOL, the Wolves can not make any money, because Wolves only make a profit if the Sheep sell their WOOL. So technically, the outcomes are mostly decided by the Sheep. That’s where psychology, economics, and risk protocols enter the game. Many NFT projects have used a staking system, but Wolf Game adds an element of risk and strategy to it.

Collect as your hearts desire,
Until you grow tired,
Yet heed caution.

Greed leads to grave risk,
And the Wolves may whisk,
Up and away your Resources.

So what do you have to do in this game, and what is the risk all about?
Grow your lands with structures and resources. Raise the sheep and have experienced farmers. Try to be part of a wolf pack. Join communities, and make connections. It’s a by-book strategy game that has all OG gamers hooked. The spice they add is the “risk protocol” and actual money-making aspect.

Guess what, if that sounds too good to be true, hear this: You don’t have to spend so much time playing the game to earn $WOOL! They definitely top Axie Infinity with that, where players had to grind for countless hours. In Wolf Game it’s all about risk and strategized thinking. As the shepherd says “ High risks will be well-rewarded”. Intrigue.

Wolf Game’s initial launch was in November 2021 on Twitter via thread tweet. We can say it was love at the first tweet from the community. 10,000 animal NFTs were 0.069420 ETH at mint (around $300 at that time). It’s not foreign that upon minting, you have no idea which NFT you will get. The creators gamified every aspect of the process because minters couldn’t tell if they were ending up holding a sheep or a wolf. There was a 90% chance of minting a sheep and a 10% chance of a wolf.

Wolf Game: Thousands of Sheep and Wolves compete on a farm in the metaverse. A tempting prize of $WOOL awaits, with deadly high stakes.

It was a total adrenaline rush for users, some even managed to sell these NFTs for as much as $85,500 on the secondary market! People were making insane money pretty fast as major players in the space such as Gary Vee praised the game before it fully started. The Wolf Game hype skyrocketed like there was no P2E game ever before.

You know how everything that goes up, must come down eventually. The crazed hype over Wolf Game NFTs exploded in a matter of days after two technical difficulties happened:

As tragic as this sounds, The Shepherd didn’t give up on the vision. Shep got set on bringing order to the chaotic farm. A couple of days later, a new contract “The Herdsman” was introduced and it ensured no further exploits were present. Several changes were made to the initial Wolf Game structure:

What Changed in the 2022 Wolf Game Update?

The Wolf Game update introduced new concepts that further expanded the ecosystem and decision-making aspect of the game. The founders claim the new update utilizes “hybrid Web3 – Web2 architecture” where gameplay will occur off-chain and ownership of assets (NFTs) solely on-chain. You can know all about the game’s rules and mechanics in their detailed Woolpaper. For now, let’s briefly highlight the changes:

Community 0 is now referred to as “The Peak”. It is a special area where Wolves will breed and recharge. The Peak will also periodically host a “massive multiplayer competition for WOOL”. Players must have both WOOL and a Sheep or Wolf to participate in the event.

The release also introduces five new in-game, off-chain resources: Grass, Stone, Water, and Wood. These are collected from Land, with the outputs varying based on the composition of each plot. Community Silos can be built to increase the daily production rate of resources but are always prone to sabotage by Wolves.

A new resource involved in the Sheep and Wolf breeding processes is Chops. It can be acquired from ‘The Butcher’ by burning sheep, or during the ‘Courting phase’ of breeding.

A new interesting factor to the game is the weather. It impacts the collection of resources. Three different types (Sunny, Cloudy, Rainy) are independently present across communities, with the weather updating each day at midnight based on a 60-day weather forecast.

Where Can I Get $WOOL?

Users will not be able to sell their wool tokens for fiat (USD) within the game. However, secondary markets for Wool Tokens have developed on decentralized exchanges like Uniswap, where the token sells for around $0.0219. We can notice the volume of $WOOL rose dramatically after the launch of the full game in December. However, it slowly declined toward mid-January. Does this mean the hype is dead?

Where To Buy Wolf Game NFTs?

For now, the only place to purchase a Wolf Game NFT is on the secondary market like OpenSea.Currently, the Floor price of the Wolf & Sheep NFTs is 0.7 ETH. However, only a handful of the NFTs is available for purchase. This is because over 90% of Wolf Game NFTs are currently staked and most of the unstaked NFTs are not listed for sale.

While there are only a few Wolf Game NFTs up for purchase, this could easily change. If the project reopens minting, users may want to purchase an NFT to flip it. Another way more NFTs could become available is if the Sheep decide to not sell their WOOL. In this situation, the value of a Wolf would become less as it is not earning any WOOL. If this happens, users may decide to sell their Wolf NFTs.

High-Profile Players of the Game

Wolf Game earned the hearts and minds of many high-profile people in the space, and this is one of the factors that led to its huge success. One of the biggest influencers in the web3 space is Gary Vee, and he is one of the biggest admirers of Wolf Game. Another bright influencer is the creator of ArtBlocks Snowfro, who is one of the key players. Gmoney also secured many victories in the game. Probably the most unexpected high-profile Wolf Game player is Elijah Wood who purchased two Wolf Game NFTs on November 20th, 2021,  becoming one of the game’s early adopters.

Here are some tweets from high-profile Wolf Game players, and boy how crazy it is that all the intelligent crypto minds are into it!

I am at a loss for words. This could be 5 figures turned to 7 on one trade…

A few hours into the Wolf Game land claim, 84% has been claimed by Gen 0 Sheep and Wolf holders for free, and only about 1.5% of plots are for sale in the secondary market. Pretty wild for what has been mostly a free claim so far.

call me crazy, but i've just traded CryptoPunk 2927 for 3 @wolfdotgame lands. hooked on this game rn

Not sure if it’s rare & not the blue color I was hoping for, but excited to make some history in the game

Waited 14 months to be able to mint my 1st wolf. Pumped to see what I get next🌊 pic.twitter.com/v48XNBhCsE

+++ Will toss in two unminted Chromie Squiggles to sweeten the deal.

gmoney’s house of baths is now open for business!

Get all your bath salts here. Pics of @yumad_eth’s feet not included. pic.twitter.com/OmBMGGSzwi

Many people are praising Wolf Game’s innovation with its integration of risk strategy with blockchain gaming. The game has seen so much success so fast, for example on Nov 30, 2021, According to DappRadar data, Wolf Game NFTs (sheep, wolves, and lands) generated upwards of $6.7 million in trading volume. Moreover, At its peak, Wolf Game was ranked #2 on OpenSea after BAYC only, with over 13,000 ETH in sales volume. The highest sale recorded was for wolf #2772 sold for 20.5 ETH (about $85,000 at that time).

After the technical difficulties the game faced, The Shepherd managed to keep the players engaged and hooked on the game. I mean seriously, this game got the biggest names playing it. So, obviously, something about it is very interesting. Not many days ago Seedphrase exchanged his 70 ETH Cryptopunk for 2 ETH worth of land in Wolf Game, and it got the whole community losing its mind!

So the mind-boggling question is:
What makes this play-to-earn one of the hottest in 2023?
Is it the charming 8-bit pixel art the game has?
The entertaining story-telling and GIFs The Shepherd has?
The high-profile people playing the game?
The adrenaline rush strategy games give?
All of the above?
We can never know for sure. As always, the decision of participating in any P2E is yours to make only.