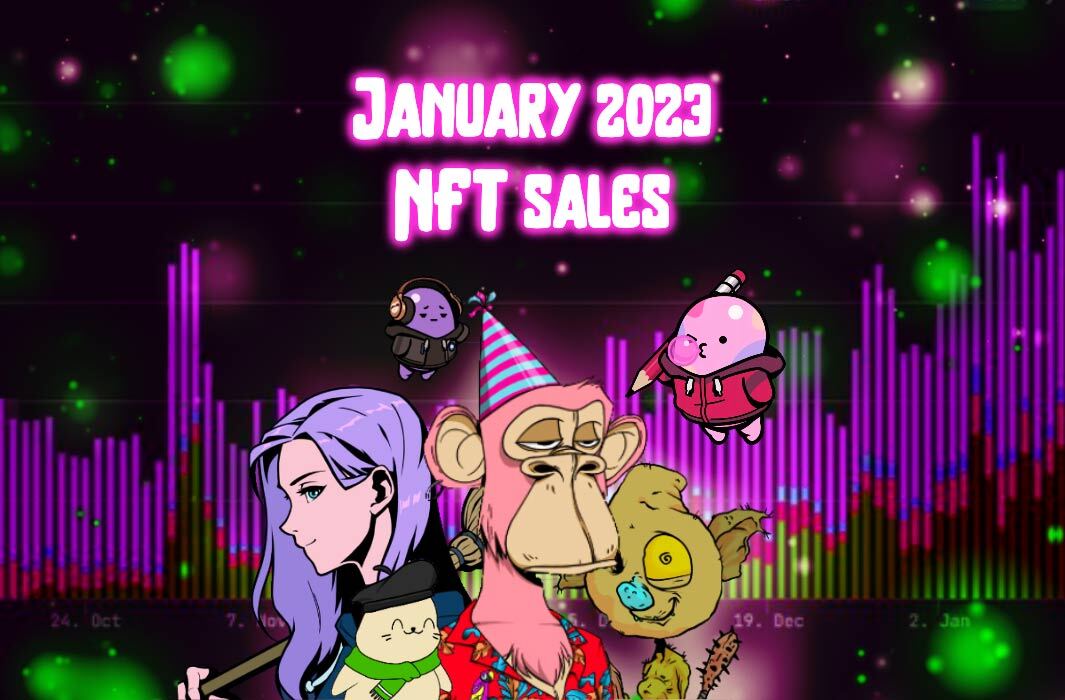 It’s only been a few days into January and NFT headlines are exploding. Long story short, NFT sales pumped 26% and dropped 56% only two weeks into 2023. With LUNA and UST failing in May and the collapse of FTX in November, hope for the NFT market evaporated with SBF’s embezzled funds. The year 2022 is quite difficult to recover from, so what is this sudden craze for NFTs all about? Why are collections pumping? What the hell does all of that mean anyway? Let’s find out. Spoiler alert, the signals from all this are VERY mixed.

Let’s Start with an overview of the previous year pouring into the new one. According to data from NFTGO, it’s clear that the interest in trading NFTs has declined dramatically. Which BTW is only natural, because a bubble’s gotta burst and stabilize eventually. However, January 5, 2023, signaled the highest Secondary Marketplace NFT Sales Volume. Now note that this milestone hasn’t been seen since the first market crash in May 2022. The mind-intriguing question becomes, what happened in the first 5 days of 2023? We’ll get back to this later.

Now according to Cryptoslam, NFT sales had a 26% increase during the first week of January 2023. More precisely, the platform records 1.2 million NFT transactions across 400,740 NFT buyers. After that week of glory, the platform noted a 59.35% decrease in the second week. Seems like someone decided to leave the match when it was heated, oops.

The shining star, as always, was the Ethereum blockchain. It accounted for 75.33% of the sales recorded between Jan. 8 and Jan. 15, 2023. Solana held the second-largest position in terms of NFT sales, with 18.04% ($37.66 million) of the week’s total sales. Seems like there is hope for Solana after many collections left its blockchain.

According to data from Compass, the secondary marketplace NFT sales volume was the highest on January 5 for the last 180 days. It’s notable how Blurr Marketplace started to seriously compete with OpenSea in total volume. Why is Blurr trending like orange is the color of survival? That’s mainly due to their smart airdrop strategy by the end of December 2022. You can read all about it here.

One of the reasons that NFT sale volumes are skyrocketing in the first week of 2023 is the NFT collections themselves.

Some woke up on the wrong side of the bed on January 3rd and decided to spike up Goblin Town’s trade volume to 1.21k ETH.

9GAG, despite all odds, decided to drop The Captainz NFT collection on January 6th. The project’s total volume reached 9.99K ETH in under 5 days.

Sappy seals were one of those collections that were highly traded on the mysterious January 5th. This led to a 71.96% increase in their floor price!

Azuki played their cards right by the end of 2022 introducing physically backed tokens (PBT). They even teased the launch of an Azuki Metaverse: Hilumia Land. Obviously, this led to a 3.5 ETH Azuki floor price pump.

Probably the biggest pump in NFT sales is the effect of Yuga Labs. At the end of December 2022, they dropped the mysterious bomb of “ The Trial of Jimmy the Monkey”. This further led to the announcement of an Ape Game, which basically got people hyped to no limits. Consecutively, all Yuga’s NFT Collections’ floor prices got pumped. Specifically, BAYC secured a 12 ETH increase on its own!

How Will NFT Sales Influence the Rest of 2023?

It’s hard to tell if these NFT sales are good or bad news. Especially with the 56% decrease in the second week of 2023. Yuga’s new project and Azuki’s new metaverse are probably the biggest reason these sales are pumping. It also seems like Yuga Labs is single-handedly holding the market on its back. What happens when they run out of ideas? What happens when Azuki’s metaverse flops? How long can these numbers hold in 2023? It’s too early to assume anything and too early to be pessimistic. I mean is the sale of cryptopunk #2927 for 2 ETH going to be the only breaking highlight of 2023? We just have to wait and see.