Paying Homage to 1999’s Version, The Jordan 4 Oreo Air Drops in May 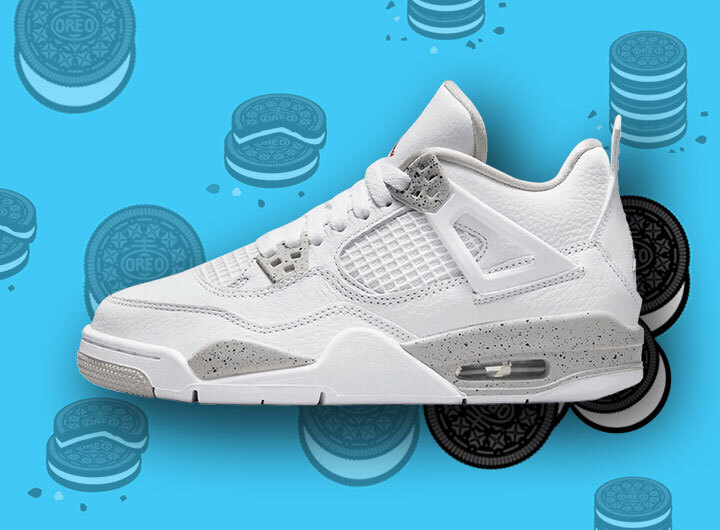 The third time’s always a charm! And when it comes to the Air Jordan 3, Nike struck success with its line way back in 1988. But were Jordan and Tinker Hatfield able to celebrate a similar triumph with the 4th series of Air Jordans? If you know your shoe-game, you know that the answer is a big YES! And the upcoming Jordan 4 Oreo Tech Grey is another proof of this major success. The AJ4s were featured in the same 4 legendary colorways of Air Jordan 3: The White/Black/Cement, Black/ Cement Grey, White/Military Blue, and White/Fire Red

The Air Jordan 4s were the first series to release internationally, upgrading the brand to becoming the coolest and most popular sneakers in the world. Thanks to many awesome collabs like the Travis Scott x Nike Air Jordan 4 (2018), the KAWS x Nike Air Jordan 4 (2017), the “Thunder & Lightning” Pack (2006), and many more. This legacy of a sneaker is Michael Jordan’s favorite – even compared to the Jordan 1!

Rumor Has It: Will We Witness A Retro Return?

After last year’s leaked rumors of an awaited Air Jordan 4 “White Cement” for 2021, chatters are finally put to an end: There will NOT be a return of the original “White Cement” Retro this year. If you’re a true sneakerhead, you’d know that the ‘White Cement’ is one of the most iconic sneakers in the 4th series. Although we feel a bit down that we won’t get that retro, we’ll take whatever Jordan we can get!

Not to worry though, the upcoming AJ4 doesn’t fall far away from the Retro model. The white Jordan 4 Oreo looks a lot like the OG and takes inspiration from the OG release. If you follow zSneakerheadz, you definitely came across last year’s October mock-up of the pair. If you still haven’t seen it, check it out below. According to zSneakerheadz’s render, the shoe seemed like a mix of the Oreo, “White Cement”, and “Fire Red” original colorways, with a touch of “Tech Grey”. But did his vision of the release come close to the final product? Not much, this time.

The All-New Jordan 4 Oreo in Tech Grey: More “Oreos” for the Fam?

Freshest information from ZSneakerHeadz finally reveals a clearer view of the Air Jordan 4  “Tech Grey” which will arrive this May. Although the sneaker brand also dubbed these as ‘Oreos’, however, they aren’t like the traditional Oreo release. In fact, these kicks will have an opposite color blocking of the originals! It actually looks like a whiteout version of OG Air Jordan 4 Oreo. Disappointed by the gossip or not, let’s be real! This new pair turned out to be pretty dope! The upper of the model wears smooth white leather with a matching mesh construction at the vamp and profile. The sneaker has a light grey inner lining with the Jumpman logo on the heel. It also has a freckled light grey shade, with the ‘Oreo’ visible at the support wings, back tab, and rubber outsoles. And finally, a ‘Fire Red’ Jumpman sign hits the tongue and heel of the anticipated ‘Tech Greys’. This signature sneaker is one of the most popular Jordans to date. And if you’re a true sneakerhead, you’ll know that the White/Cement model is an iconic and most anticipated sneaker in the 4th series. These clean-looking, white 4s are everything you’ll need for the warmer seasons.

When done right, Air Jordan 4s can be very very profitable. So if you want to make some cash, you better plan on flipping multiples of these! And to cop in bulk and cash in some big loads, you’ll need to use the best bots, proxies, and servers. Keep it locked here at Another Nike Bot for all of your sneaker release dates down the road.