Say Hello to the Meebits NFT! 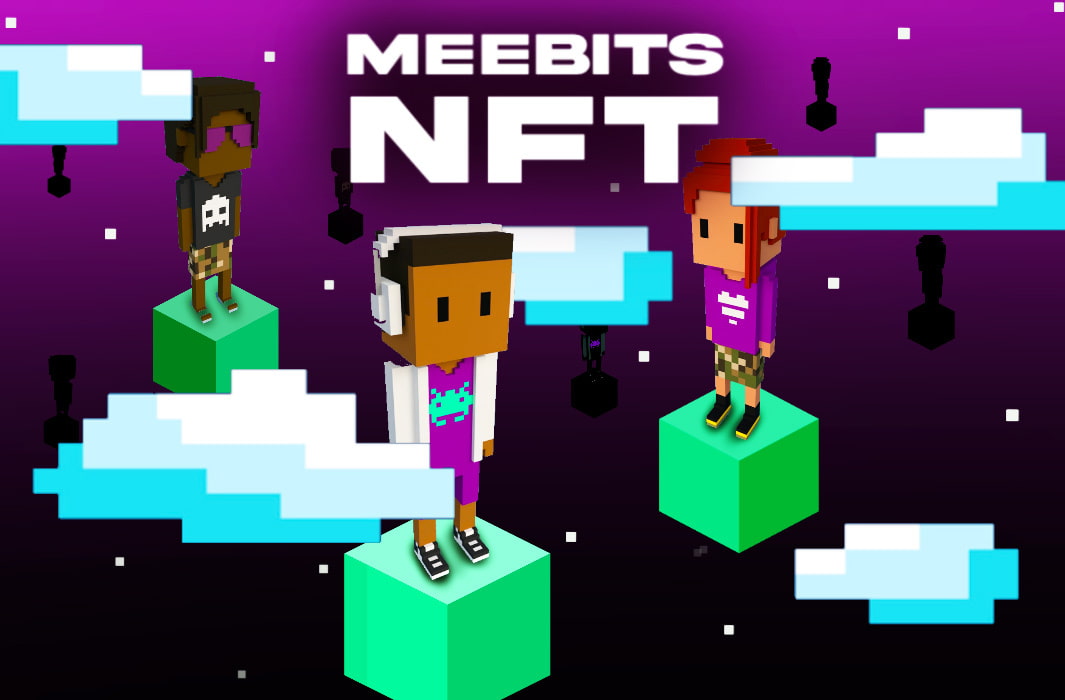 From the makers of the iconic 2017 release Cryptopunks, Larva labs strike again with the Meebits NFT collection! Similar to their predecessor, the Meebits NFTs are a series of characters with algorithmically-generated traits, so basically they belong to the generative art NFT category. They belong to the Ethereum blockchain. However, unlike the two-dimensional Cryptopunks, Meebits are 3D characters rendered in voxels AKA pixels with volume. Looks Familiar? Well, Meebits may remind you of the 3D characters from Minecraft or Roblox.

Apparently, people do find the ability to own a 3D model of your very own virtual avatar a worthy prospect! How can we tell? Well, as I’m writing this, judging by the 24h sale volume of the Meebits NFT collection that amounts to $115,341 with a floor price of $4,973 according to data from OpenSea, people are going crazy over these 3D NFTs. Moreover, this collection belongs to 6,571 extremely lucky owners!

In May 2021, the Meebits NFT collection arrived at a time of peak hype for CryptoPunks, Larva Labs’ first successful venture. The NFTs released weeks away from a Christie’s auction that many were expecting to see fetch a price in the tens of millions of dollars. Furthermore, Ethereum was having one of its best weeks on record, soaring through all-time highs nearly every day of the week. The creators definitely knew what they were doing!

Not only that, Larva Labs distributed the Meebits NFT avatars through a Dutch auction, a method of selling in which the price is reduced until a buyer is found. In detail, the price for buying and minting a Meebits NFT lowered to zero Eth (plus Ethereum gas fees) over the course of a week.

In March 2022, Yuga Labs, the creator of the show-stopping Bored Ape Yacht Club NFT project, bought from Larva Labs the intellectual property rights for CryptoPunks and Meebits NFTs and announced it through a blog post.

Why did they buy intellectual property rights? Simply enough, they wanted to grant holders of Meebits the same commercial property rights as holders of the Bored Ape Yacht Club. Thus, any Meebits NFT owner can use the images contained therein for commercial purposes. Next, Yuga bought 1,711 Meebits. And In July 2022, they added a 5% royalty on secondary sales of Meebits, such as those on OpenSea and LooksRare, to in their words “help keep this Meeb party going (and going and going).”

Types and Rarity of a Meebits NFT:

The 20,000 Meebits NFTs are not created equal, each possesses rare qualities and belongs to a distinct category. Also, how much are they retailing for on OpenSea? Let’s list the categories of Meebits from least to most rare:

Not only is the collection sectioned into categories, as a matter of fact each Meebits NFT boasts specific attributes and clothing. Our Meebits are quite the fashion icons! These attributes are the following: Tattoo, jersey number, earring, overshirt, hat, beard, glasses, pants, shoes, hair and/or shirt.

How Can I Buy a Meebits NFT?

I am not in any way suggesting that you HAVE to splurge on a Meebits NFT, however, if you have a few thousand dollars you can spare, here’s the rundown!

The Meebits official site offers gas-free exchange! If you wish to utilize this advantage, the first thing to do is to head over there. You can by all means use a secondary marketplace, such as OpenSea, to buy your Meebits. However, the official site doesn’t charge fees for trading on its marketplace for transactions of up to 100 Meebits.

Second, connect a wallet, such as MetaMask, to the site. Lastly, check which Meebits NFT appeals to you most and is on sale. Happy minting!

What Is The Utility of a Meebits NFT?

For the longest time, the Meebits NFT collection was the laughing stock of the NFT community due to its lack of utility. Basically, the community rendered it useless…   However, according to Larva Lab, the vision for the future of the Meebits’ 3D models is that they will play a crucial role in the ongoing visionary metaverse. This will allow owners to bring their Meebits to life.

How so? In a virtual world where users interact using avatars, a Meebits NFT will integrate right in! Although some leading tech firms are building metaverses, these remain centralized. What does that mean? The tech firms control all the virtual assets on the platform. On the other hand, Web3 pioneers and Larva Labs share the prospect of building a truly decentralized metaverse, where users own virtual assets in the form of NFTs—which can be migrated between different metaverse platforms.

In fact, Meebits already found their purpose. Right now you can play with your Meebit NFT avatar in over 20 virtual worlds, apps, and games. To the Meebits community, NFTs are way beyond jpegs – and the best is yet to come!

So, What’s The Run-down?

In the NFT world, the way people receive a new collection greatly depends on the creators’ past ventures. Meaning, if your previous collections were a success, your new releases will probably make headlines as well! The Meebits NFT collection reportedly sold more than 9,000 pieces within 8 hours post its launch! They were priced at 22,500 ETH or $75 million!  Mad herd mentality! Lots of buyers jumped on the Meebits bandwagon, and this is largely due to the trusting community Larva Labs amassed throughout its journey! As always stay tuned for more collection breakdowns!