What is NFT Art Theft and How to Avoid it 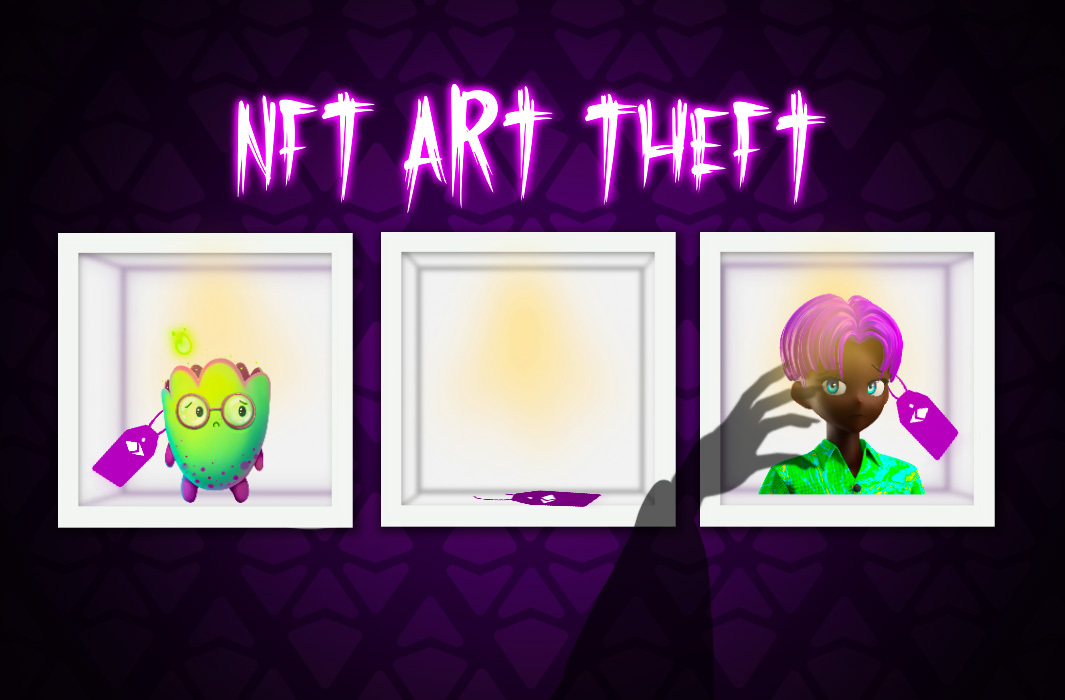 Remember the good old days when thieves made secretive international deals, studied the museum’s layout, and hacked the security system in order to attempt to steal the Mona Lisa? We miss those days. In the ever-so-developing world of Web3, thieves are now a bunch of automated bots scraping artists’ online galleries and creating NFT collections with auto-generated texts. That’s right. Thieves of the new era of the internet are bots and people who know how to code. Welcome to the dark side of Web3, where NFT art theft is becoming everyday news.

Blockchain technology’s early promises of NFTs were tempting. NFTs gave artists a new way to profit from their work while keeping all digital rights. NFTs are a new and revolutionary art form on a secure blockchain. Therefore, plagiarism had to be a thing of the past in Web3. However, it’s not that easy. Why? Because there is no concrete way to know if an NFT was minted with stolen art. Anyone can mint anyone else’s art. Copyright infringement is getting popular in the NFT scene and artists are ENRAGED.

Many well-established artists and newcomers upload their art on the internet in order to gain a following. Whether on social media, art galleries like DevianArt, or their own website, the art is there for everyone to see. However, while NFTs have been gaining popularity over the past couple of years, they’ve bred a new type of legal offense against intellectual property – NFT art theft. Rampant piracy and fraud have made major headlines in NFT-related news. Since major NFT marketplaces, like Opensea, let people create accounts and sell whatever digital image they want, they subsequently opened a HUGE door for plagiarism and theft.

How Does it Happen?

First, we have to make it clear that not the actual NFTs in question get stolen. Since NFTs are an on-chain transaction, selling them wouldn’t violate any copyright. However, the artwork connected to the NFTs that is off-chain would. Artists who are interested in blockchain technology would usually mint their artwork as NFT and make a profit. On the other hand, some artists are not big fans of NFTs and heck, some don’t even know what an NFT is. The latter are mostly the ones who get their art stolen and sold as NFTs without their permission. It’s pretty simple actually. Anyone can go up to an artist’s website, right-click and saves an image, mint it as an NFT, and sell it on an NFT marketplace like Opensea.

Probably the most outrageous and inhuman NFT art theft story to exist. Qing Han, famously known as Qinni, was a digital artist and Cardcaptor Sakura anime lover. Her illustrations of Japanese anime made her rise to fame securing 2.5 million followers on Instagram. Devastatingly, Han announced on December 28, 2019, in a tweet that she got diagnosed with cancer. The four-time open-heart surgery survivor later died in February 2020 at the age of 29. Her work now exists as a memory of her cheerful spirit and artistic abilities. Moreover, her art kept on living on her social media platforms as a legacy.

Got diagnosis today. Cancer, Stage 4, doc says I got about a year or year and a half left.
~
~
~
~
hey guys how do i stop randomly bursting into tears lol pic.twitter.com/XoGEt3iv8g

A year right after her death, fraudsters and thieves took an interest in her work and started selling them as NFTs. An account could be found on Twinci, an app that markets itself as the first NFT social marketplace, that lists one of Qing’s popular artwork, “Bird Cage” which she posted only one month before her tragic death. Qinni’s brother Ze stated that he couldn’t do anything realistic to stop fraudsters from profiting off his dead sister. However, he kept notifying Twinci about the stolen art in which the latter eventually deleted the account of the fraudster. Sadly, the Bird Cage’s listing was one of many listings on Twinci that features Han’s artworks with some being up for 500 TWN (around 400 pounds).

The San Antonio painter Aja Trier is famously known for her Dog paintings a la Van Gogh. She reimagines furry creatures like dogs, bears, lions, and other animals in a Starry Night setting. The artist sells merchandise based on her work such as mugs and pillows and spent most of her career stealing thieves from pirating her work on marketplaces like Amazon and Etsy. However, with the recent boom of NFTs, Trier had to face another form of art theft. Thieves have started selling her work as NFTs for a jaw-dropping rate. Thousands of her works, probably duplicates, were listed by an anonymous account on Opensea, and 37 pieces were sold. “They just kept taking and remaking them as NFTs,” Trier said. “It’s so flagrant. And if it happens to me, it can happen to anyone.”

Someone is literally attempting to steal my entire identity on @opensea – They're not only stealing my art but using my name and a headshot to attempt to legitimize their theft. This shouldn't be possible. #nft #arttheft #nfttheft #identitytheft #art pic.twitter.com/qlkjIO08ih

Unfortunately, some artists had to go to certain undesirable lengths to stop fraudsters from stealing their art. British comic book artist Liam Sharp announced in a tweet that he’ll be shutting down his DevianArt page to hinder people from plagiarising his art and selling them as NFTs. His claim for shutting down his page was that his requests for markets to take off his work were constantly ignored, and he should not have to report each artwork that gets stolen which can become a bit tedious.

Sadly I'm going to have to completely shut down my entire @DeviantArt gallery as people keep stealing my art and making NFTs. I can't – and shouldn't have to – report each one and make a case, which is consistently ignored. Sad and frustrating. pic.twitter.com/oNH6yXQtyU

Opensea had claimed in the past that it was against the site’s policy to sell plagiarised NFTs. The enforcement of this claim came through delisting and banning accounts that had been reported for NFT art theft. However, even though Opensea responds to takedown requests, the platform still puts the weight on the artists to do the requests. As long as Opensea doesn’t request identification from accounts and validate each collection as being authentic, plagiarism will continue to be an issue.

However, in August 2021, Opensea tried to take measures by collaborating with DevianArt to develop a system that detects NFT art theft. The Protect tool detects NFT infringement, thus protecting their deviants from NFT thefts. The tool monitors and scans blockchains to find any similar matches of original content posted on DevianArt and notify artists on the platform. Two months after its inception, the tool detected 86% of infringement cases that were successful. Those who want to prevent their art from exploitation by NFT sales should submit their work to DevianArt.

As an artist, you can take precautionary measures to protect yourself from NFT art theft.

Every major concept or technology that promises a major shift in a specific field will most likely be faulty in its first years of inception. Art theft has been a major concern since forever and considering the blockchain’s promises of NFTs being a revolutionary way for artists to monetize their work, we’ll have to put our trust in the Web3 world as the technology further progress. For now, artists and buyers have to put extra effort into hindering NFT art theft, in hopes of NFT marketplaces enforce stricter copyright rules.