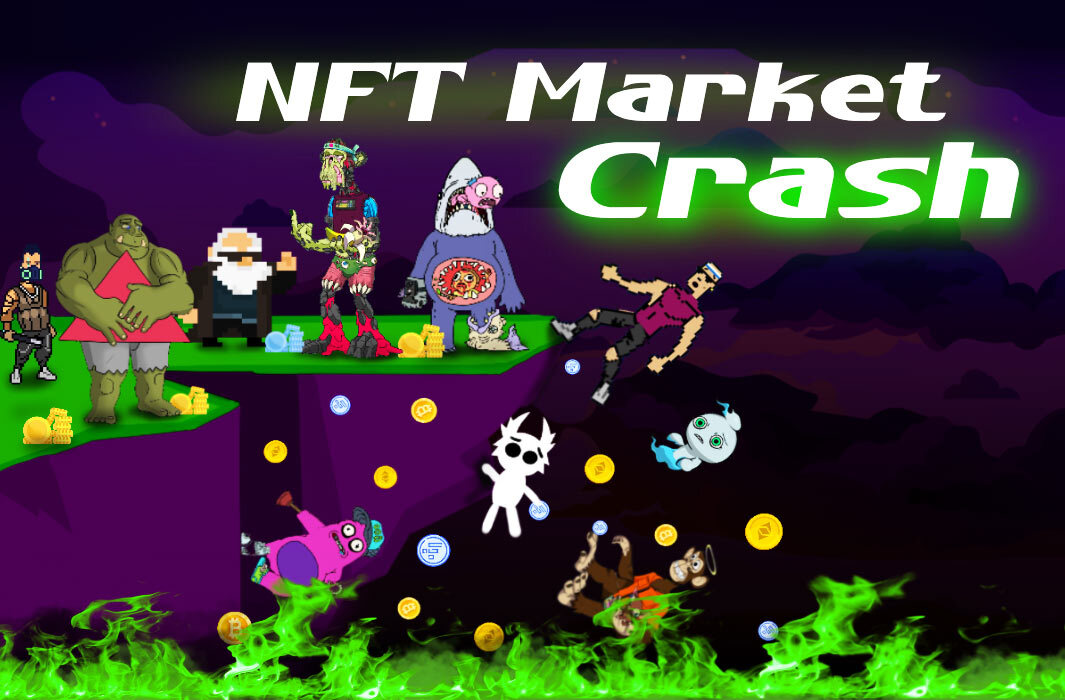 We are witnessing a total NFT market crash. Almost every single collection is down by at least 5%. The top collections are down by at least 16%. And that’s in 24 hours according to coingecko, and mainly due to the crash Cryptocurrencies are going through now. So, what on earth is happening?

You think I’m kidding? I wish. Just take a look at all the red charts pointing down. 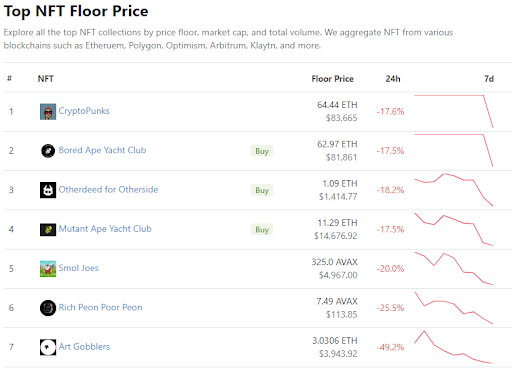 Why is the NFT market crashing?

What on earth happened in the last 24 hours that caused everything to tumble down? Well, a lot. It starts with the FTX x Binance drama. And let me tell you something, the tea is boiling hot.

FTX plunges and Binance “saves” it?

To start off on the right foot, no one saved anyone. Binance tried to take down its competitor and succeeded. Basically, Binance is the mean girl who starts the horrible rumor that crashes your reputation then defends you. Well the mean girl just triggered the NFT market crash.

Back in the good old days, Binance was the first investor in FTX, the cryptocurrency exchange company. Then, FTX grew astronomically and became Binance’s number one competitor. So Binance decides to sell its stake in FTX. But as part of the buyout, they took $2B of it in “FTT”, a token created by FTX that it uses for trading fees.

Now Binance holds a shit ton of its competitor’s token. Tick tock. The inevitable happens. Two days ago, Changpeng Zhao (CZ), CEO of Binance, took to Twitter and said that Samuel Bankman-Fried (SBF), CEO of FTX, is talking shit about them to regulators. Shortly after, CZ announced that they’re liquidating all their FTTs. Again, two billion dollars worth of them.

As part of Binance’s exit from FTX equity last year, Binance received roughly $2.1 billion USD equivalent in cash (BUSD and FTT). Due to recent revelations that have came to light, we have decided to liquidate any remaining FTT on our books. 1/4

Naturally, everyone starts panic selling and FTX drops by 15-20% overnight. More people start freaking out after 24 hours as nothing is saving FTX. Investors start withdrawing funds not to be part of the whole thing if it crashes. FTX stops allowing withdrawals. Then, SBF tweets saying that they’re agreeing on a “strategic transaction” with Binance. CZ basically bought FTX to “save” them. What Binance basically did is cause chaos to buy their competitors overnight. And they did.

This is lower than FTX current market price which crashed by a total of 0.4% in the last 7 days according to coingecko.

Solana down with FTX being its biggest investor

SBF and FTX were the biggest sponsors of Solana. Now that FTX is down, Solana inevitably faces dramatic drops and intensifies the NFT market crash. And as Binance is taking over FTX, they’ll be favoring BNB over Solana. Alameda, the trading crypto company who SBF is also the CEO of, had almost $1B in locked and unlocked $SOL which they’ll have to sell if insolvent.

What does this cause? Selling pressure on holders. And it’s clear as glass as SOL is down by 38.3% in the last 24 hours.

After all the drama, FTX stops processing withdrawals. Solana plunges. This triggers a mass panic along the crypto world. And everything goes down, down, down. The bitcoin price has crashed under $18,000 per Bitcoin. This is still a notably big number but that’s a 10.2% loss in 24 hours.

As Adele once said, let the sky fall, when it crumbles, we will stand tall. Except that literally one one is standing and they’re falling like dominos. In last 24 hours:

I would go on and list everything but the article would be way too long. Point is, the NFT market crash is intense and affecting everyone. What should we all take from this? CZ is the Regina George of the Crypto world. You better not mess with Queen Bee or else the entire NFT market will burn down.

Reactions to the NFT market crash

With hardships comes memes. Just to add a bit of humor amid the plethora of bad news, here’s some of my favorite memes so far. 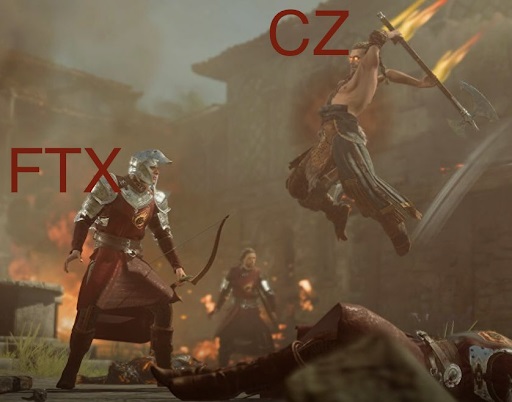 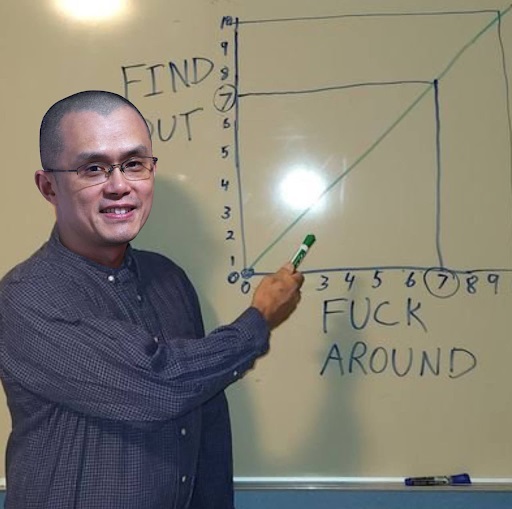 And, the golden joke is that maybe we’re looking at the whole thing in the wrong way. Just flip the charts upside down.

In conclusion, everything is on fire. If I were you in the middle of the NFT market crash, well first of all I’d cry. Then cry some more. A bit more. Then avoid selling because there’s a theory going around that this whole thing is happening to make crypto and NFTs affordable. So if their prices go down, more people would buy, then the price would start going up again.

Did you just potentially lose tons of money to make the market affordable for other people? Be fucking for real. Well, it’s just a theory and I’m no financial advisor. All I’m saying is, do some meditations and don’t make any decisions in sheer panic. While you’re at it subscribe to our newsletter just so you be the first to know about the mayhem!