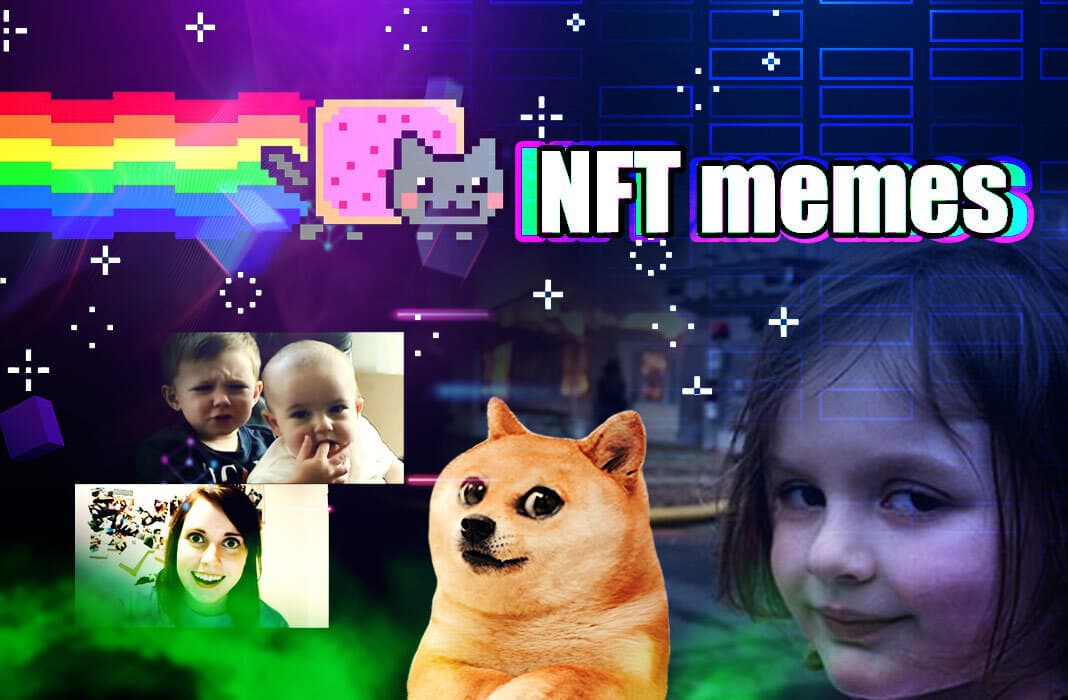 Can you think of one person who doesn’t like memes? I mean in what universe could this person exist, I’m really curious. Are you the biggest meme lover? Okay, then let’s get wild! Test your NFT Meme Knowledge. I’ll ask you the questions. Try to scroll down slower than usual.

Why Are Memes Called Memes?

This question probably occurred to you so many times. However, you may have shied away from seeking an answer. Probably because everyone seems to grasp why they’re called memes. Don’t worry. It’s not that popular of a fact. Chainwitcher has your curious urges covered!

We owe credit to the British evolutionary biologist Richard Dawkins for introducing the word “meme” into our lives. Yea it is definitely surprising, I feel you. Meme sure traveled a long way from biology to internet humor. It kinda makes sense though. Somehow.

Dawkins mentioned the concept of a meme in his 1976 book “ The Selfish Gene”. He was trying to find a word that epitomized the idea of something culturally-transmitted or imitated. Something similar to our genes.

The following literature inspirations came to his mind in the process of finding THE word:

He mixed them all up, and our beloved word meme was born! Check this out if you want an in-depth scoop about the whole thing.

What Is An NFT Meme?

Meriam Webster dictionary defines memes as “an amusing or interesting item (such as a captioned picture or video) or genre of items that is spread widely online, especially through social media”. Memes, in a nutshell, are like digitally-documented jokes about culture, society, and trends. Does digitally-documented ring any bells? Here’s where NFTs enter the picture and NFT memes become a thing. I advise you to always stay up to date with NFTs, they’re a really big deal!

NFT memes are either a meme about the NFT world or a meme that sells as NFT. Now hang on. It can also be a meme about the NFT world that is sold as an NFT. Every community has its inside jokes that eventually become tradable memes. Probably memes are the perfect candidates for becoming NFTs. Imagine actually owning an inside joke that cracked up more than half of the Earth’s population. Some people really care about that. Won’t make this section too long, let’s jump right on to the funniest memes ever made about NFTs!

What Are The Funniest NFT Memes Out There?

There are lots of memes made by people about the NFT world. These eventually become inside jokes of the NFT community. They are viral all over the internet, so we picked our favorite! Let’s see if you can spot your favorites too. I promise you’ll crack up with these NFT memes. Hold your tears!

1- The Struggle to Explain NFTs 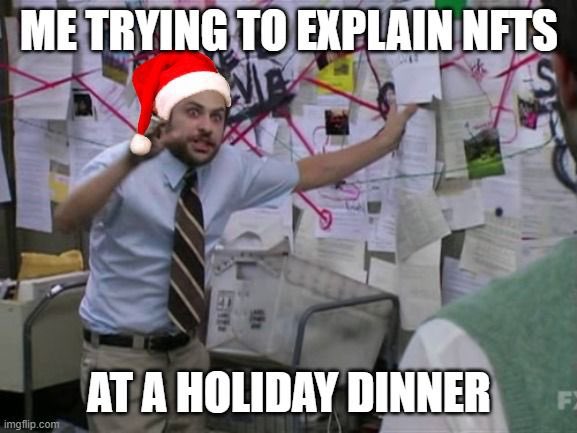 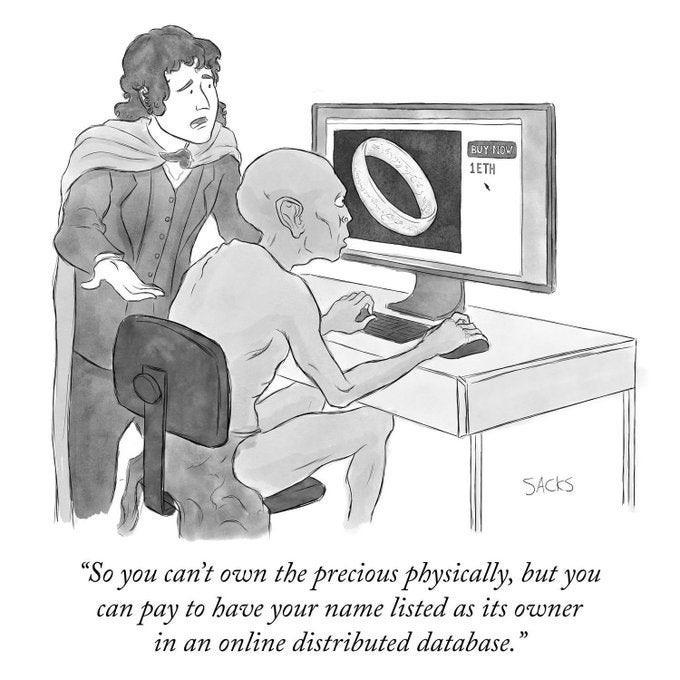 You know the struggle is real whenever you want to explain an NFT to someone. Even when you try to explain it, you start doubting yourself. Like, am I really saying this right now? Am I really convinced about owning something insanely expensive that I can never hold in my own hands? 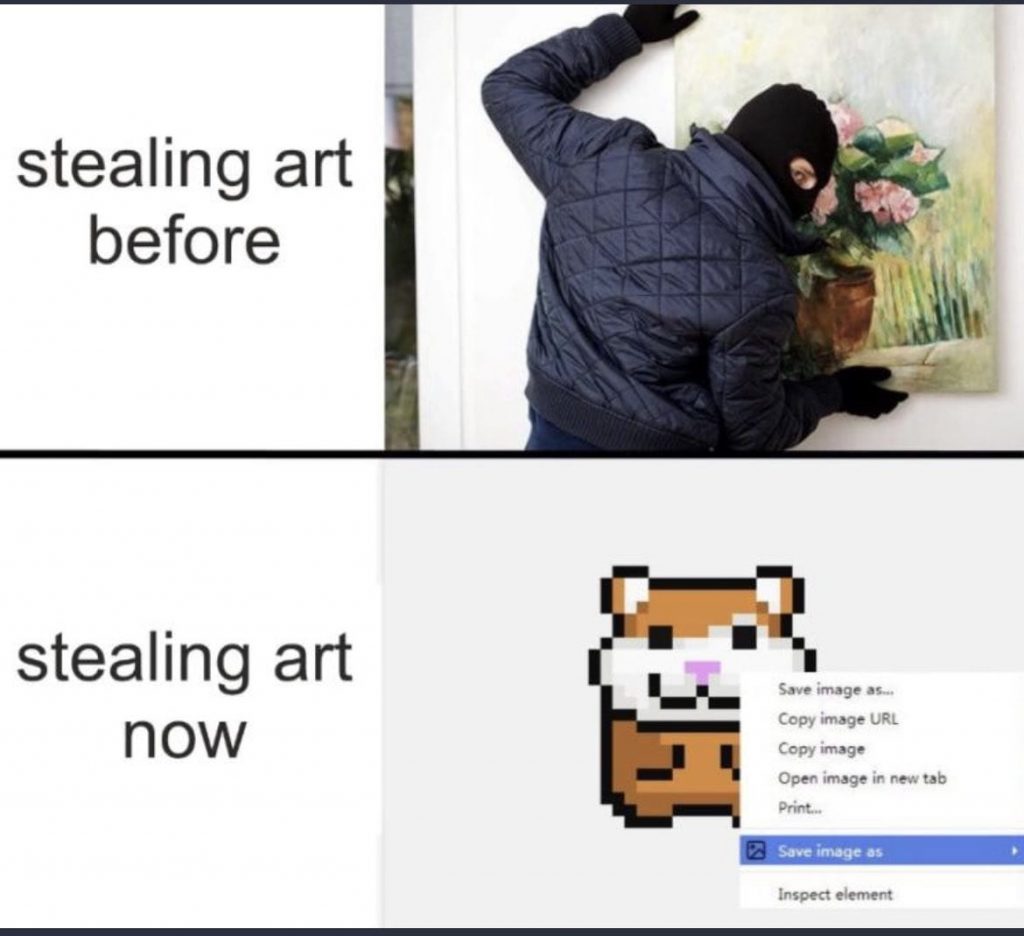 This is the most familiar joke in the NFT meme community. You know how skeptics say ” oh you bought that NFT for millions and I just right-click-saved it for free”. NFTs can not be stolen, and we owe this to blockchain technology! 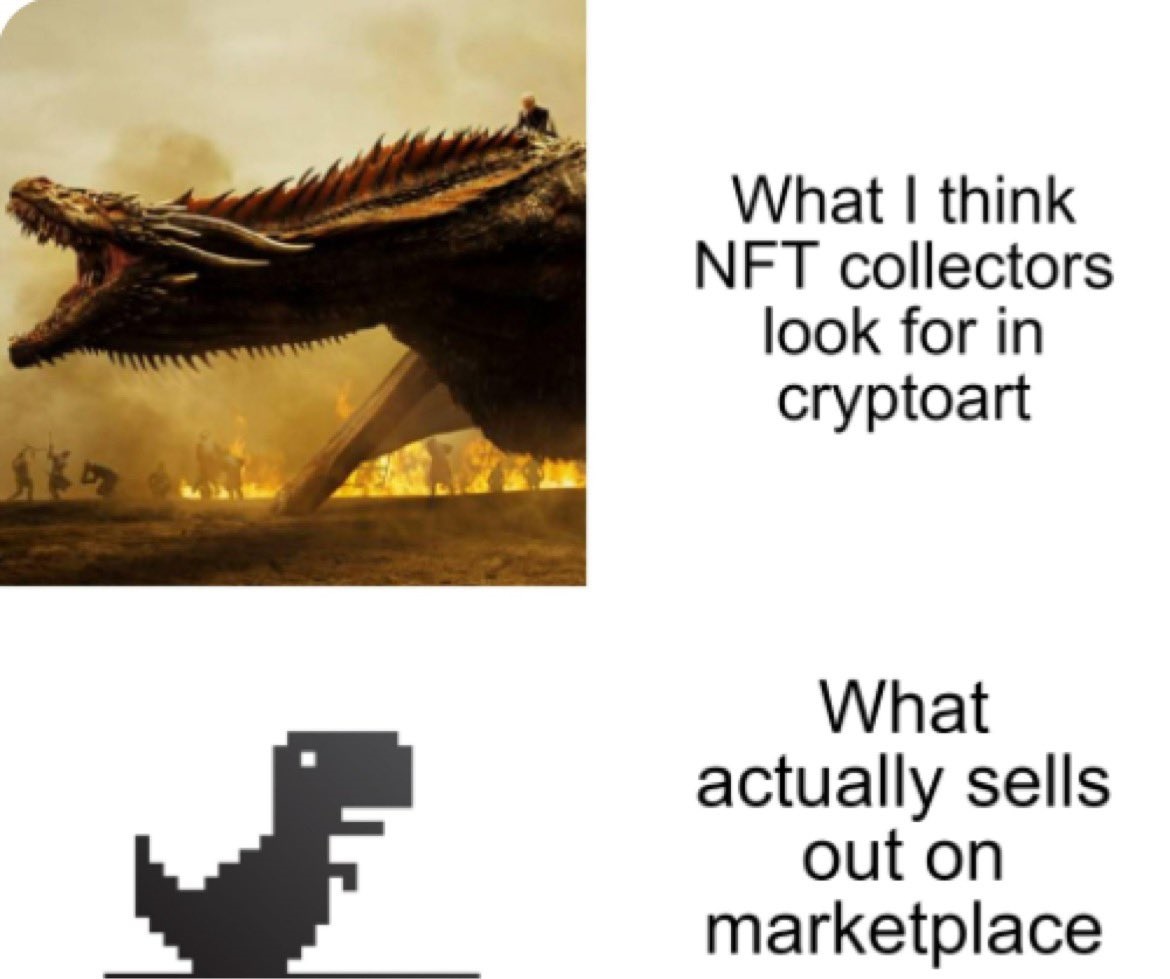 Remember how Cryptopunks literally broke the internet? Everyone wonders how the hell can such a basic form of art become so successful. It’s the 8-bit charm, know all about it here. 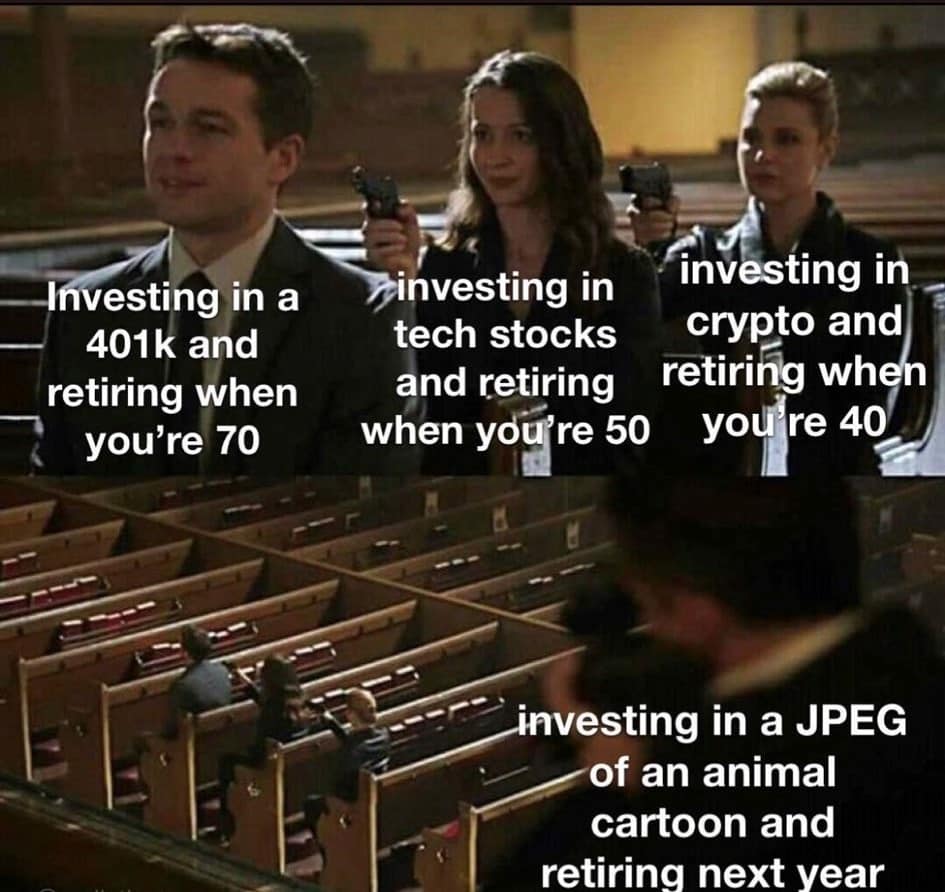 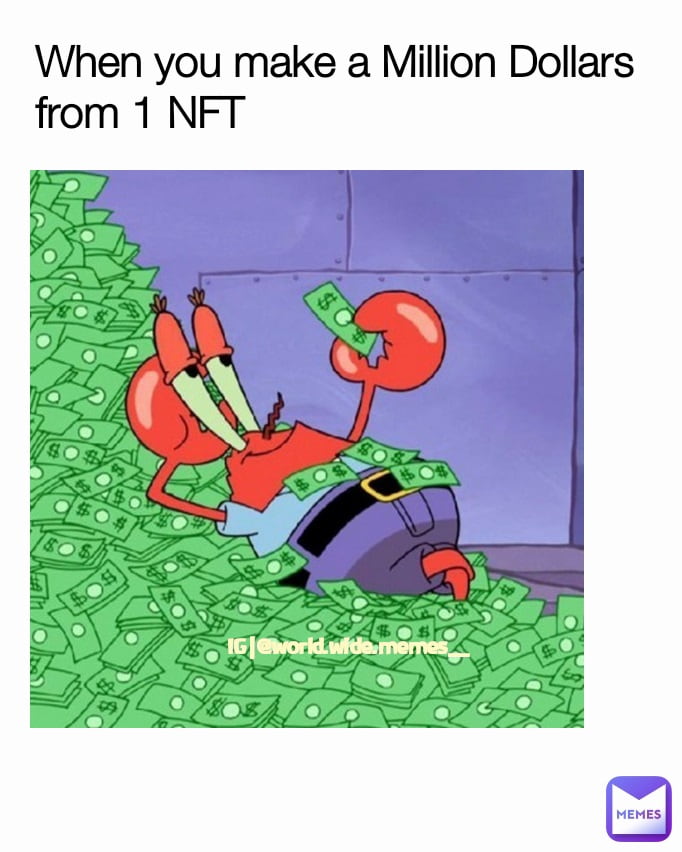 It’s true that NFTs make serious dough real fast. No one really gets it btw. Non-fungible tokens represent the future, a movement into a higher existence of some sort. probably why people are all over it. However, always research before you invest in your next NFT!

5- The Truth About Working in the NFT World 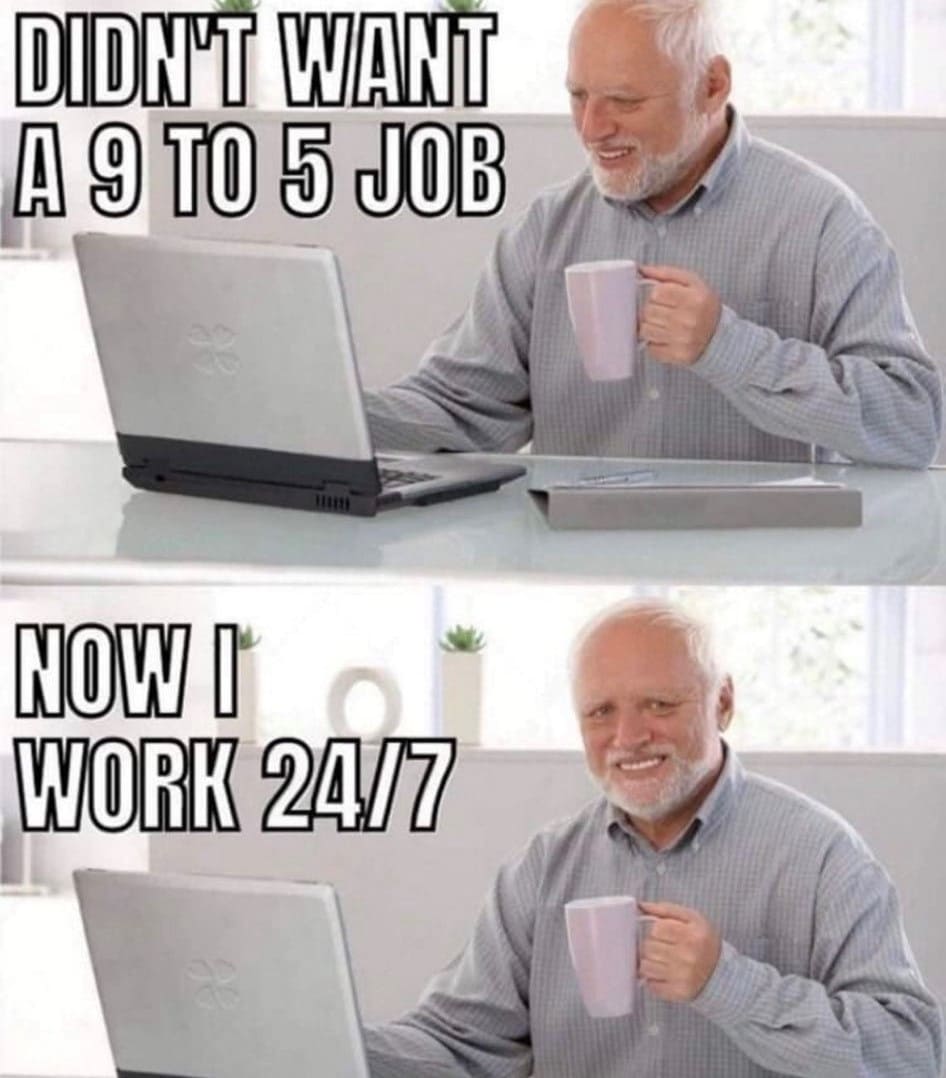 The NFT industry is ruthless. You can sleep one night owning billions of dollars, and wake up the second day almost broke. It’s not always a strike of luck thriving in the NFT business. Therefore, creating NFTs becomes a lifestyle, not a job that could end. Have a glimpse into the world of creating NFTs before you judge it as a silly pastime thing. 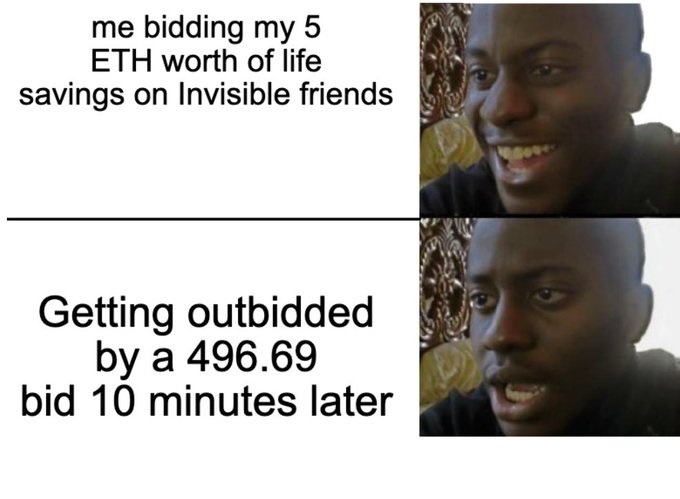 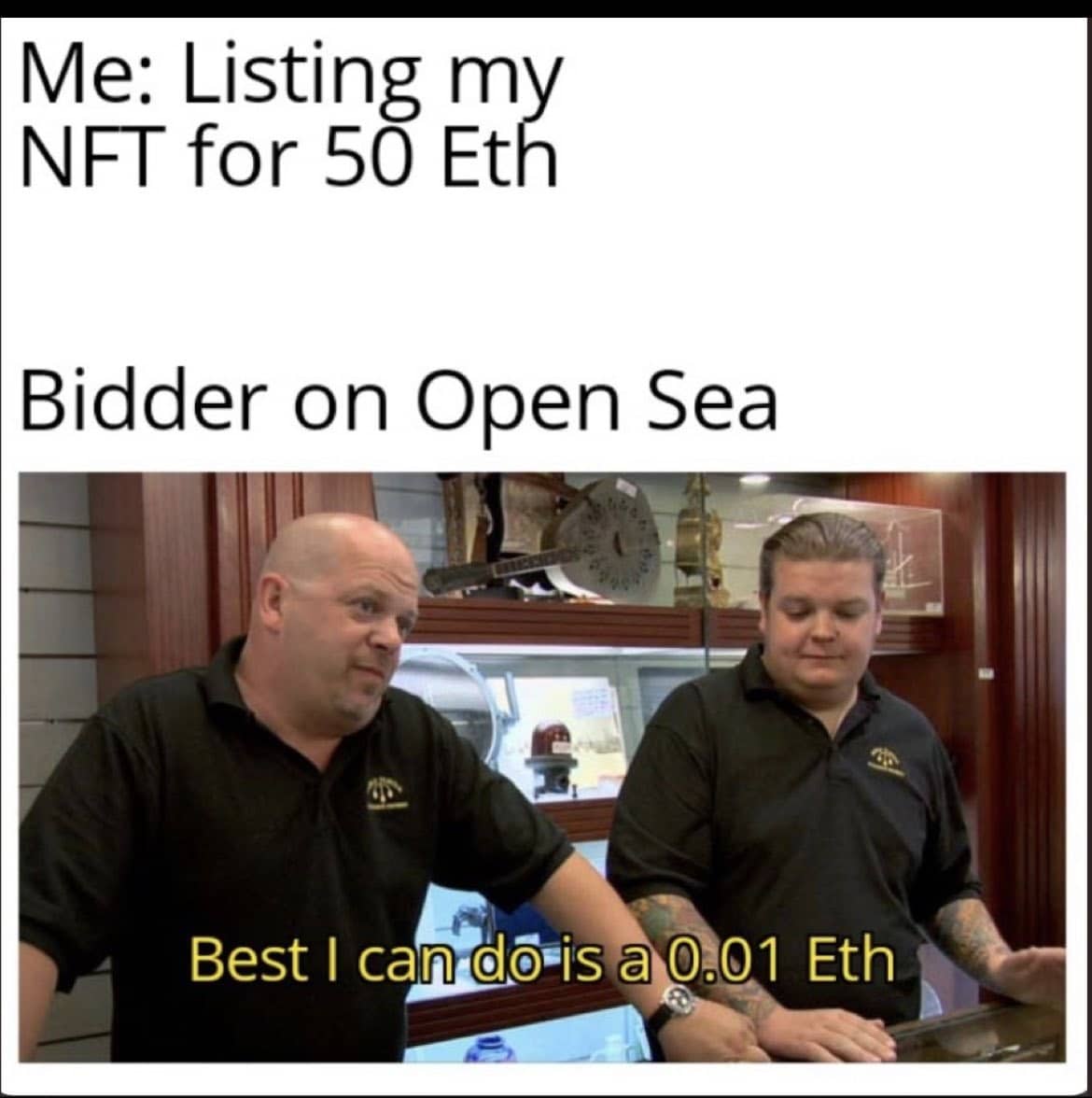 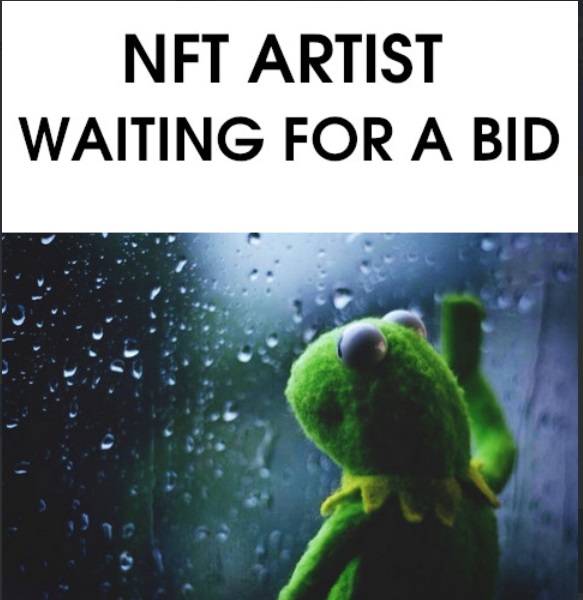 This section has the funniest memes. Really it’s insane how bidding and auctions work. Just like in real life, whenever you want to sell something. it’s not always rainbows and sunshine. It’s also like poker, you know when u bluff about an all-in move. Mix and match those feelings to understand how stressful bidding is in an NFT world. You should really master the know-how of how to buy and sell NFTs if you want to stay sane, so check out this guide! 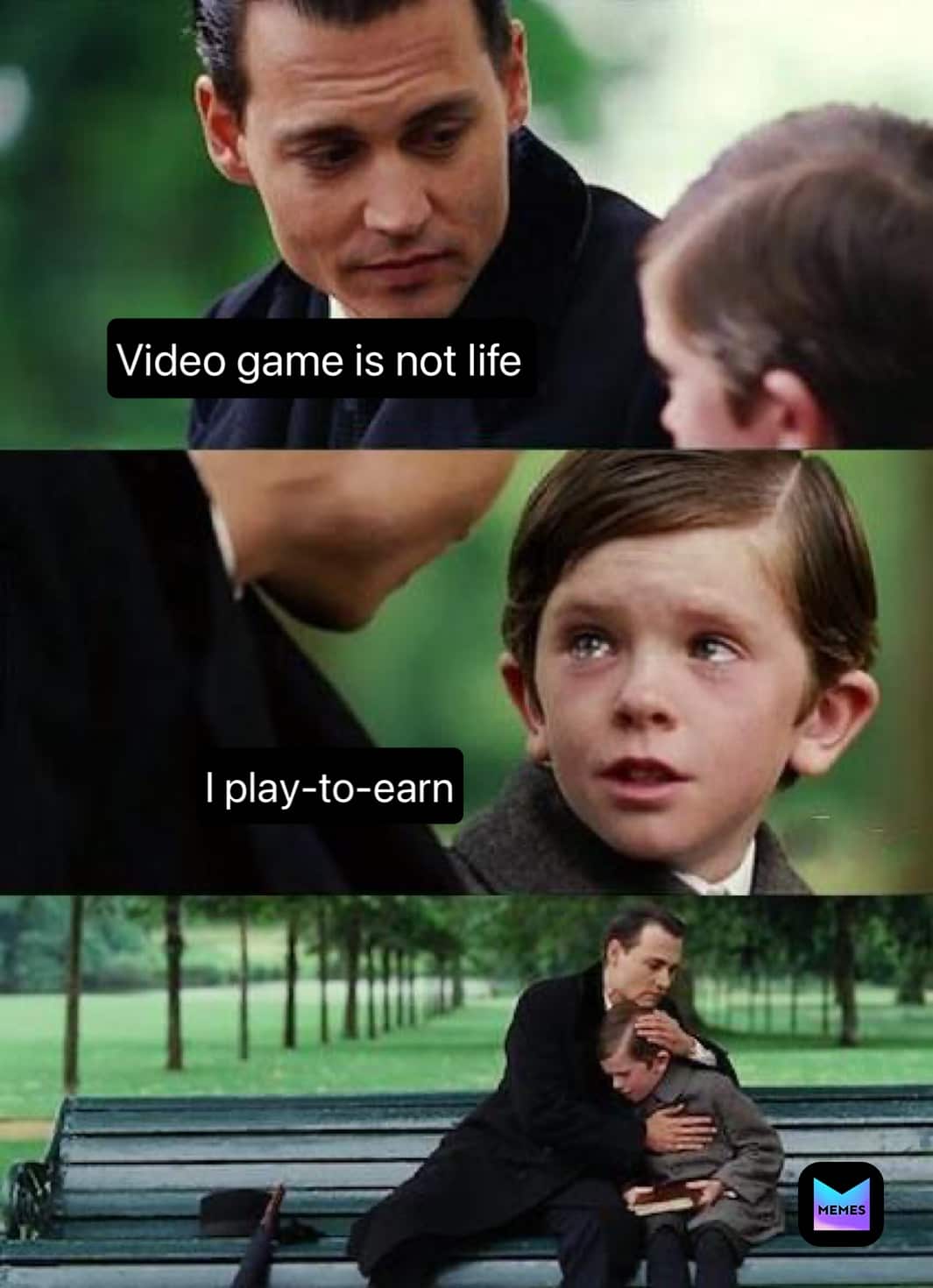 Play-to-earn games are a big hit in the gaming sphere. If you don’t know that already hop onto our P2E scoop. If you’re already a believer, we also have our top P2E game picks for you! 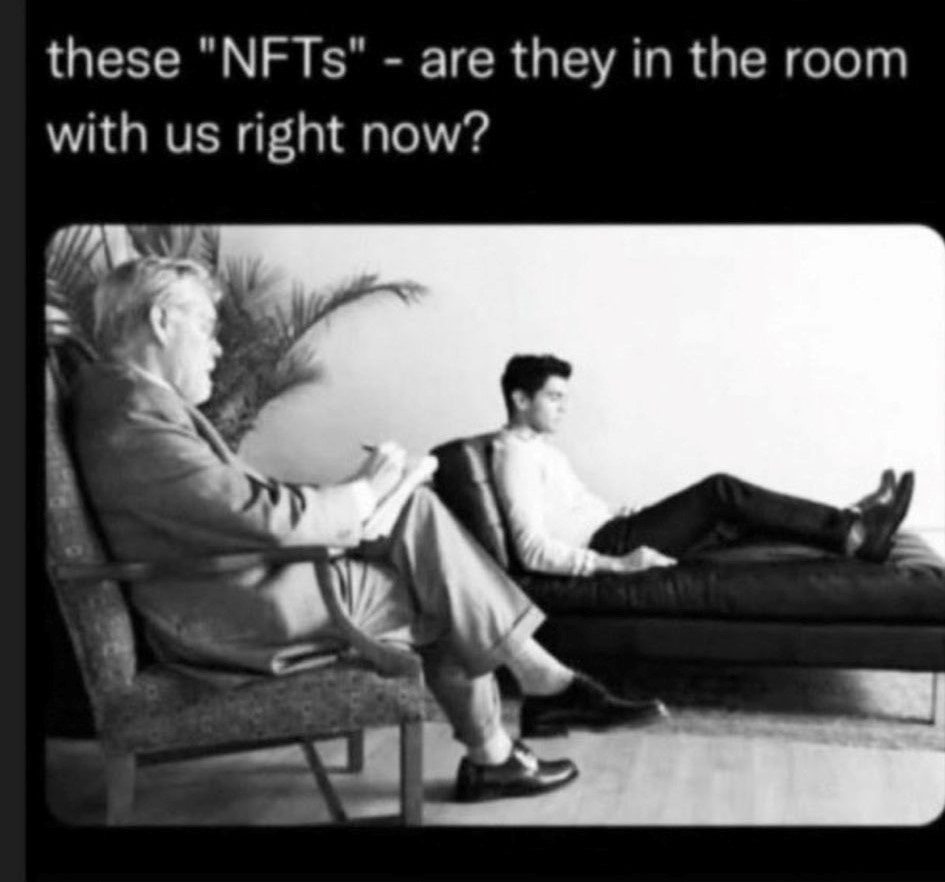 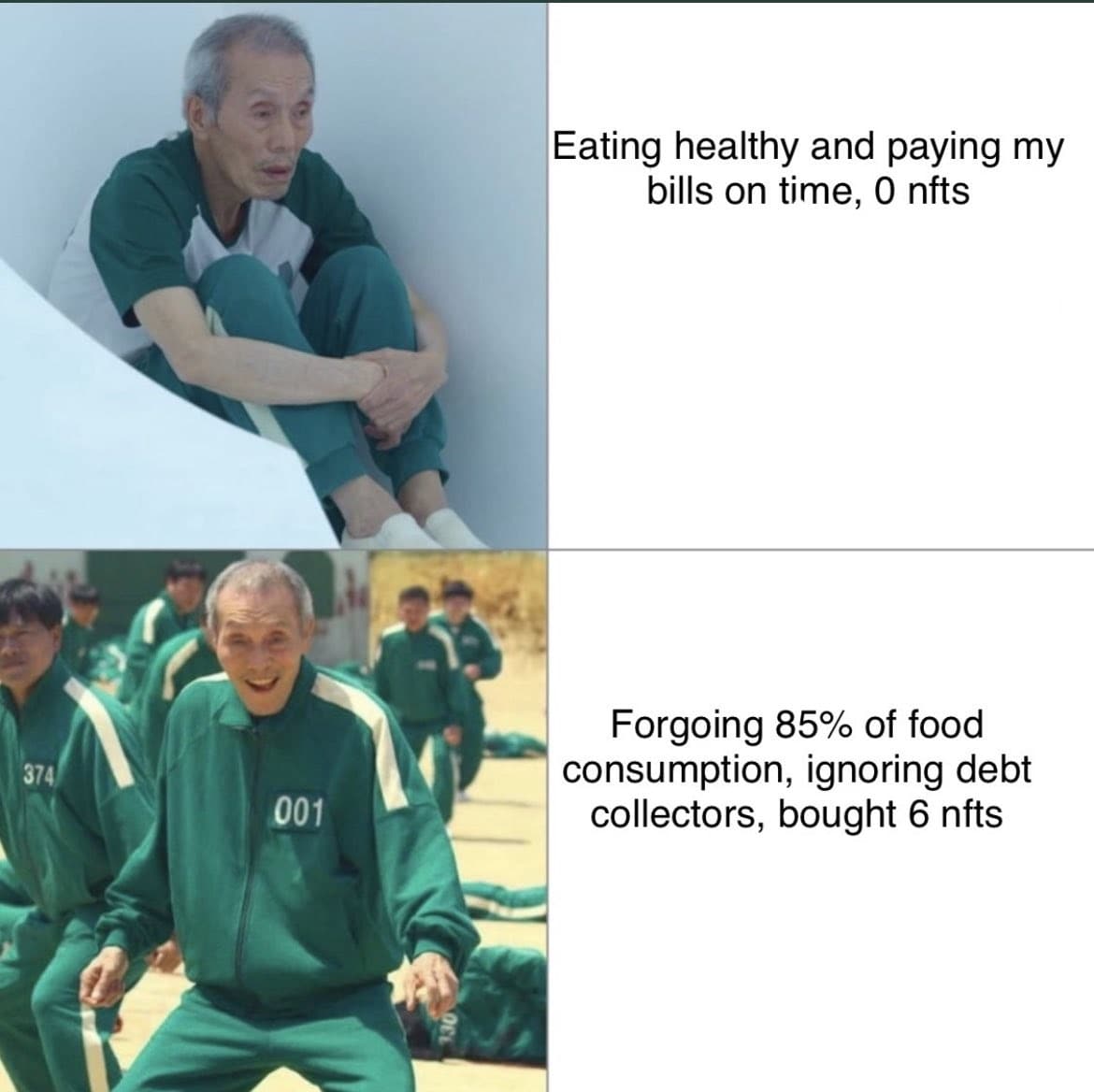 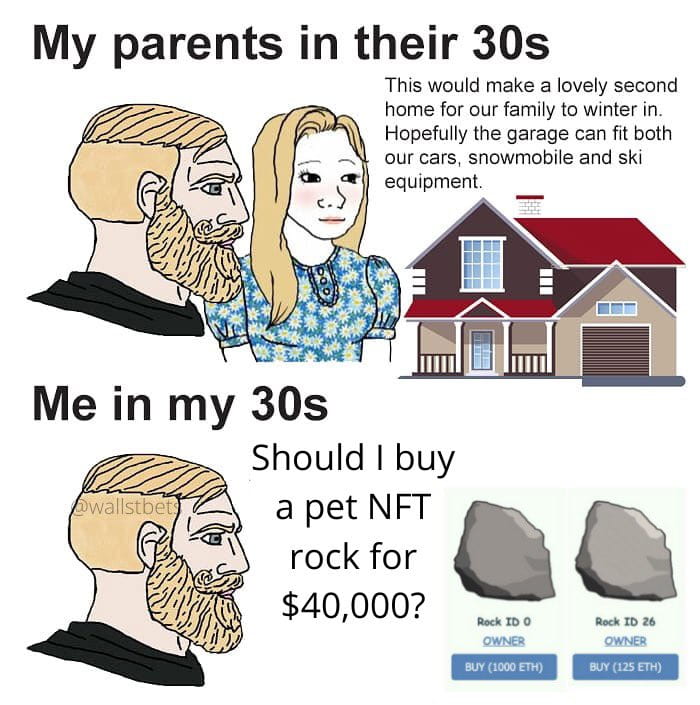 These memes are my favorite. Once you enter the NFT world, you can not leave. Even if you really want to. Maybe we’ll cover one day the secret behind the NFT obsession. 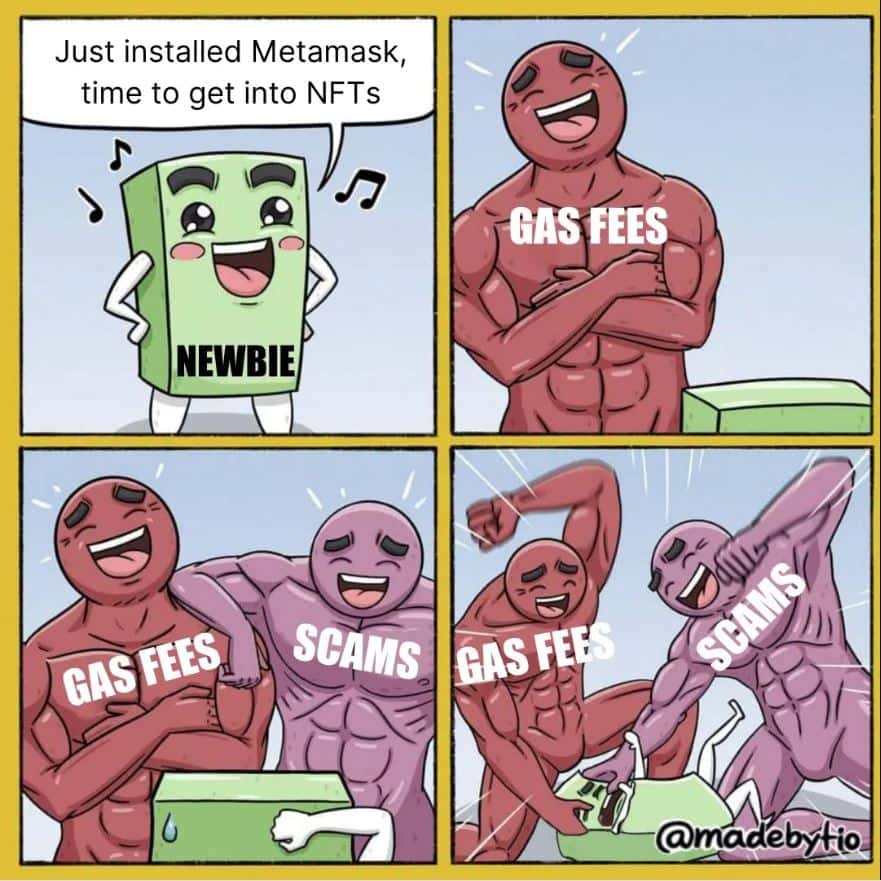 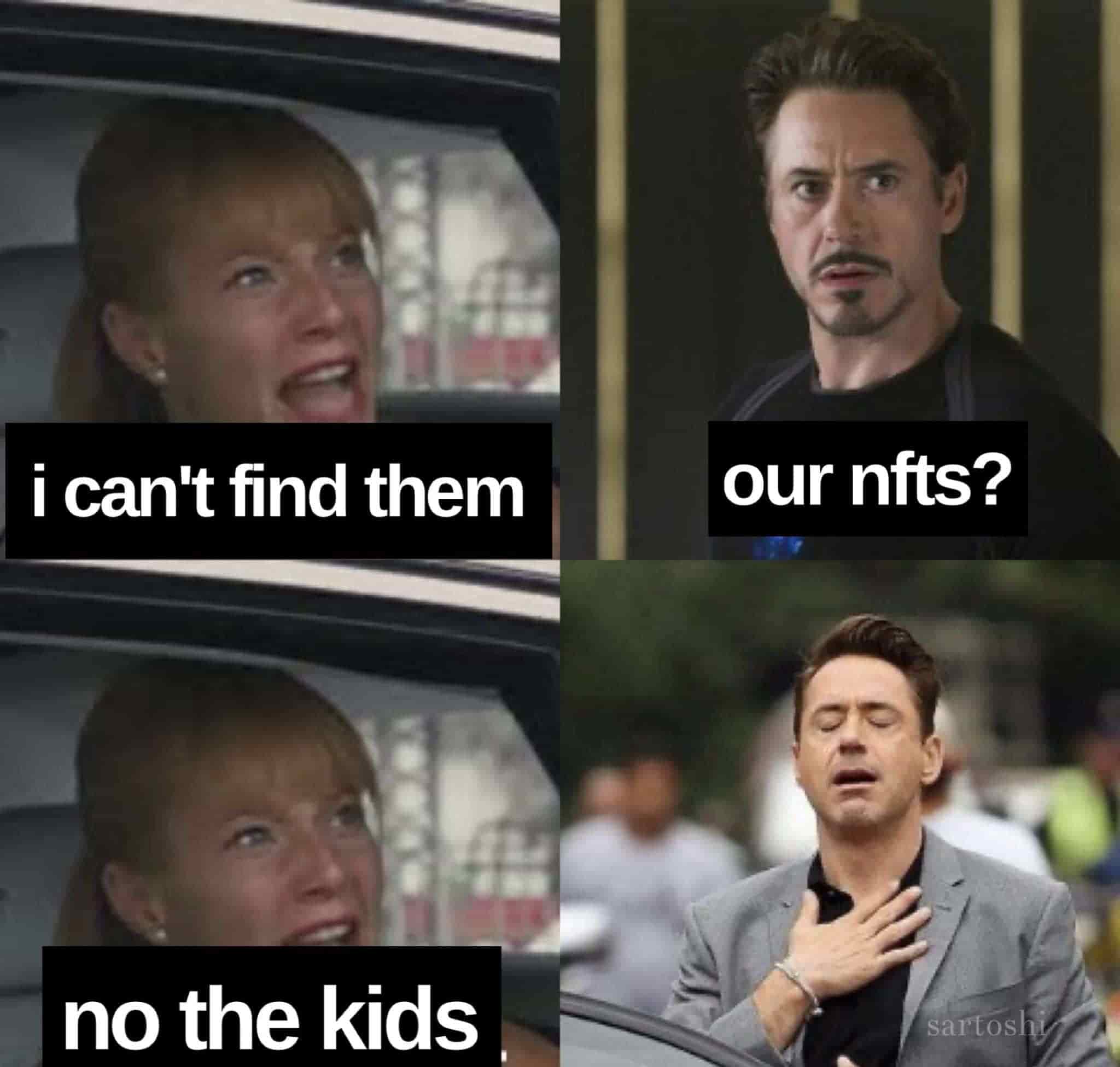 Jokes aside, being robbed or scammed is a very serious nerve-wracking thing. You should always check out for red flags about being scammed. Don’t worry, Chainwitcher has your back with this guide. 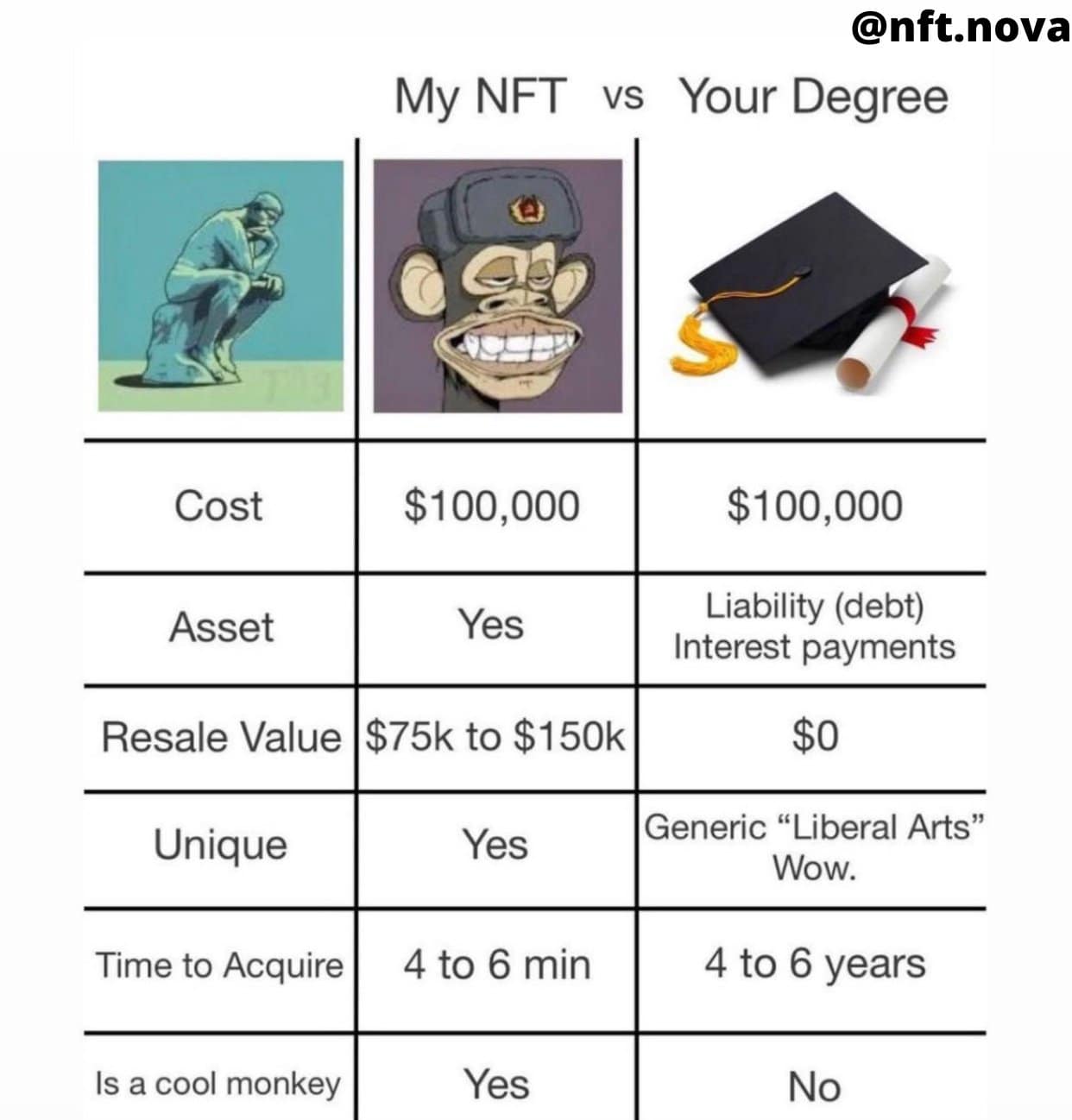 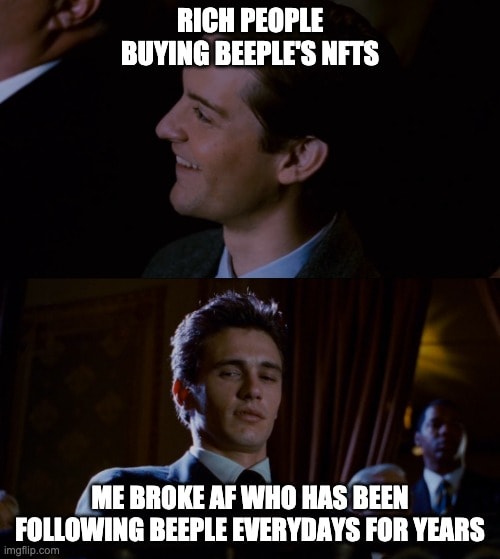 Whoever made that BAYC NFT meme is a genius! I’m not biased but, come on that’s sarcasm at its finest!

11- Gary Vee Embracing himself as a Meme 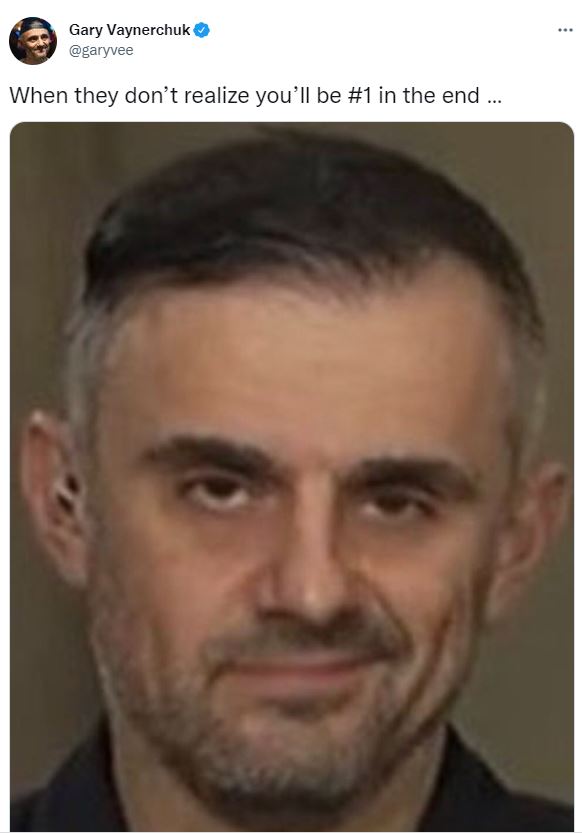 We saved the most popular NFT meme for last. Basically in an interview, Gary Vaynerchuk, the mastermind behind VeeFriends, was asked during an interview about the problematic nature of Crypto and NFT. He paused and gave this chuckle-smirk before giving an answer. The best part about this is how Gary Vee himself embraced himself as a meme in one of his tweets. Anyway, this pretty much sums up everything. NFTs are not a game, it’s a blood, sweat, and tears kinda business. So tread carefully and lightly!

Which Classic Memes Sold As NFTs? 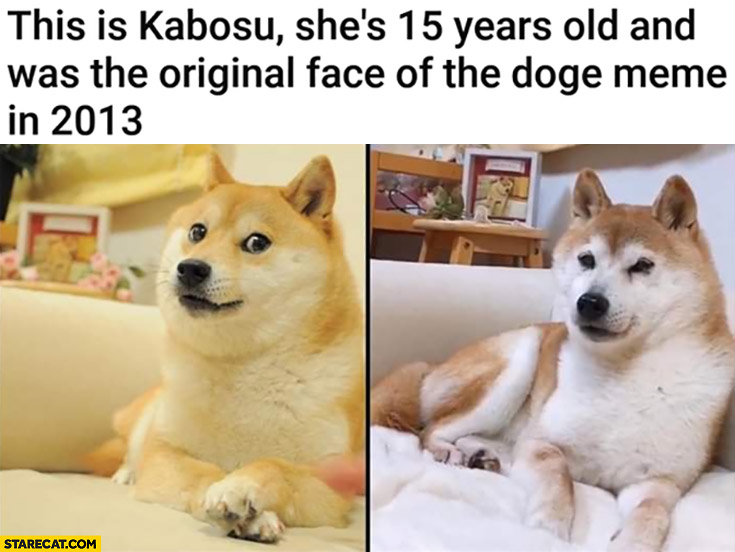 This is officially the world-famous most-expensive NFT meme sold to this day. Little did Atsuko Sato know a picture of her pet Kabosu will make her 4 million dollars in the future. On February 13th, 2010 she posted a picture of her Shiba Inu dog, and it became an instant sensation. On June 11, 2021, it sold big for 1,696.9 ETH. This picture took a life of its own and a new fan-given name, Dodge. Kabosu even made it as the face of Dogecoin, which btw is a cryptocurrency backed by Elon Musk. 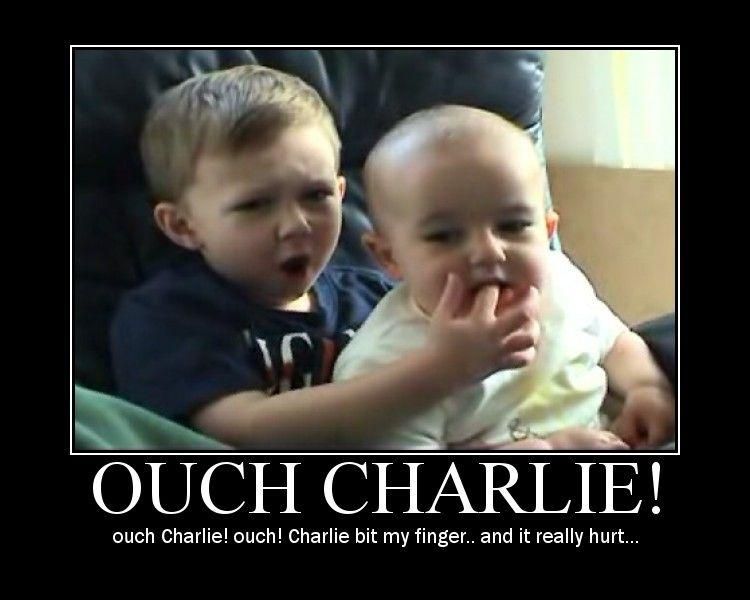 The simple intention of Howard Davies-Carr uploading a video to youtube in 2007 of his three-year-old Harry and one-year-old Charlie was for their grandfather to see it. It hit almost 900 million views, marking an internet sensation. Charlie Bit My Finger became a classic meme in internet society. On May 23, 2021, the father played his cards right. He took off the video from youtube and sold it as an NFT meme. Grossing around $800,000, the two brothers’ future college education is secured. I wonder what it feels like to be Harry or Charlie right now. 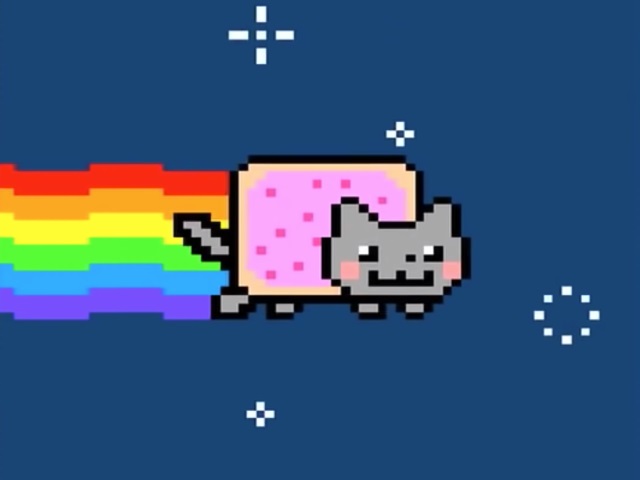 Meet Chris Torres, the father of NFT memes. He is the first person to sell his artwork as an NFT meme. On February 19, 2021, the idea flashed in his mind. He probably thought Oh memes are everyone’s favorite and so are NFTs, so why not sell my NFT as a meme?  He made a big score with almost $600,000 in earnings for his adorable pop-tart cat. Torres rightfully earned a spot in history with this move. 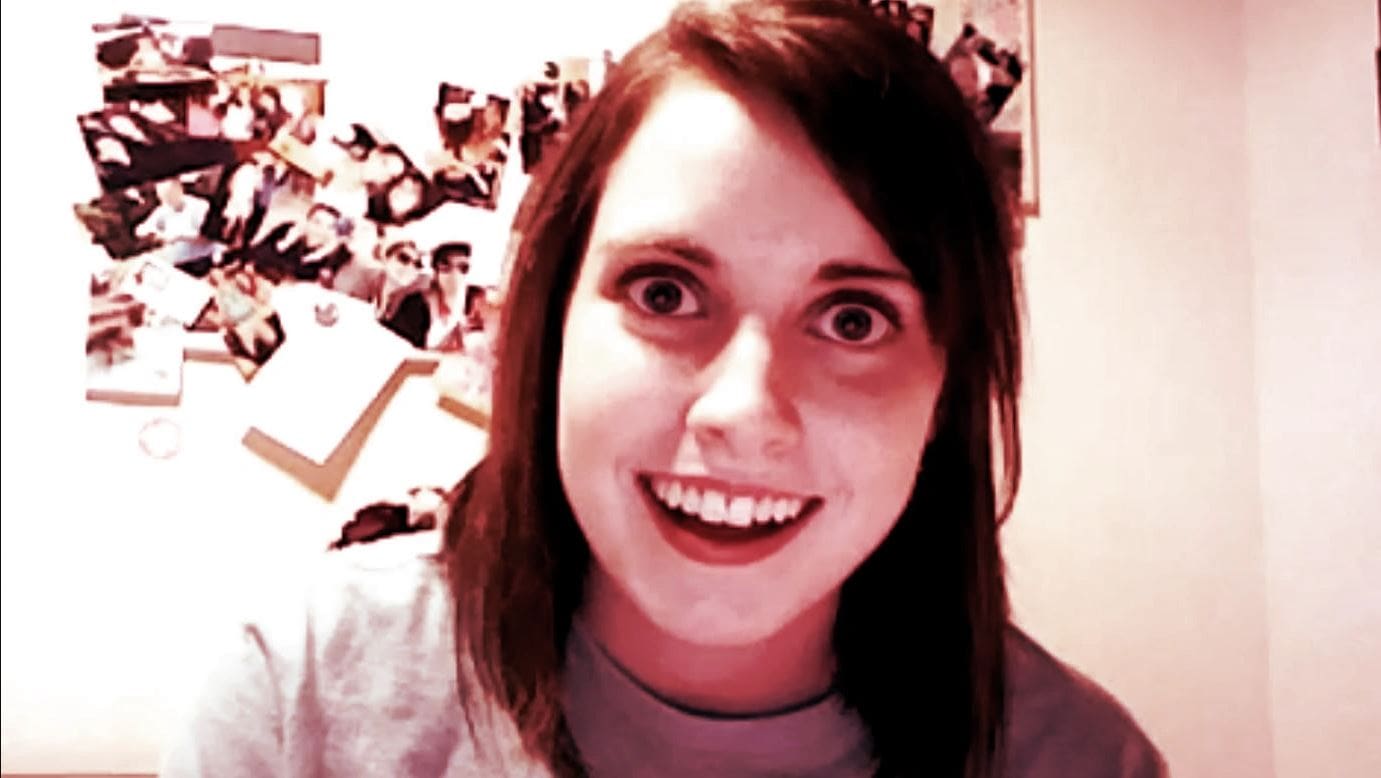 Remember Justin Bieber’s hit song “ Boyfriend”? This meme originated as a video parody uploaded in 2012 by Laina Morris. It became an instant hit on the internet. I mean seriously it is hilarious! Morris battled with the fame of this meme for so long. It gave her mixed feelings about her face being controversial. However, on April 3, 2021, she proved to understand the power of NFTs. She sold her parody video Overly Attached Girlfriend as an NFT meme for $411,000!

Can’t find words huh? She can’t find words either! I quote her “ I am so incredibly thankful and also still just BLOWN AWAY.  So weird. So cool. Wtf. Thank you, internet.” Really smart and well deserved. Who would’ve known it would ever make such money? Guys you just have to put yourselves out there! 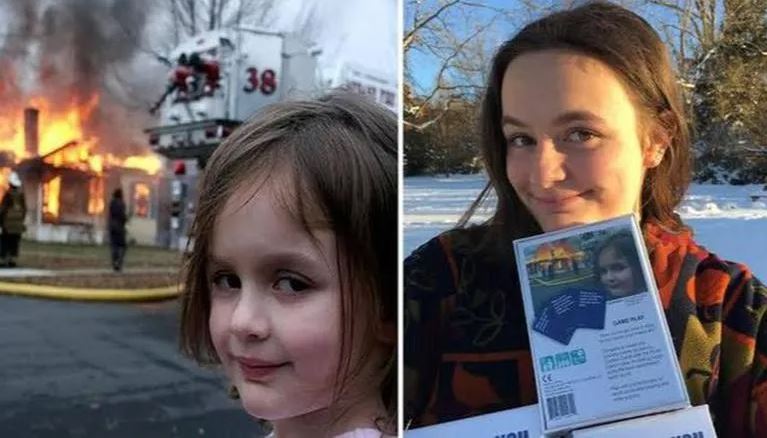 You know at this point, I can’t decide if it is just luck or genius with how an NFT meme profits so much! Disaster Girl was a product of what we can call a really good coincidence. OR was it an intentional coincidence? Then 4-year-old Zoe Roth’s Father decided to take a picture of her in front of a burning house in the neighborhood in the January of 2005. It went viral in 2008, and hit jackpot on April 17, 2021, with a sale of 495,000$! Zoë Roth, now a college senior in North Carolina used the money to pay off student loans and donate to charity. Cool … right? 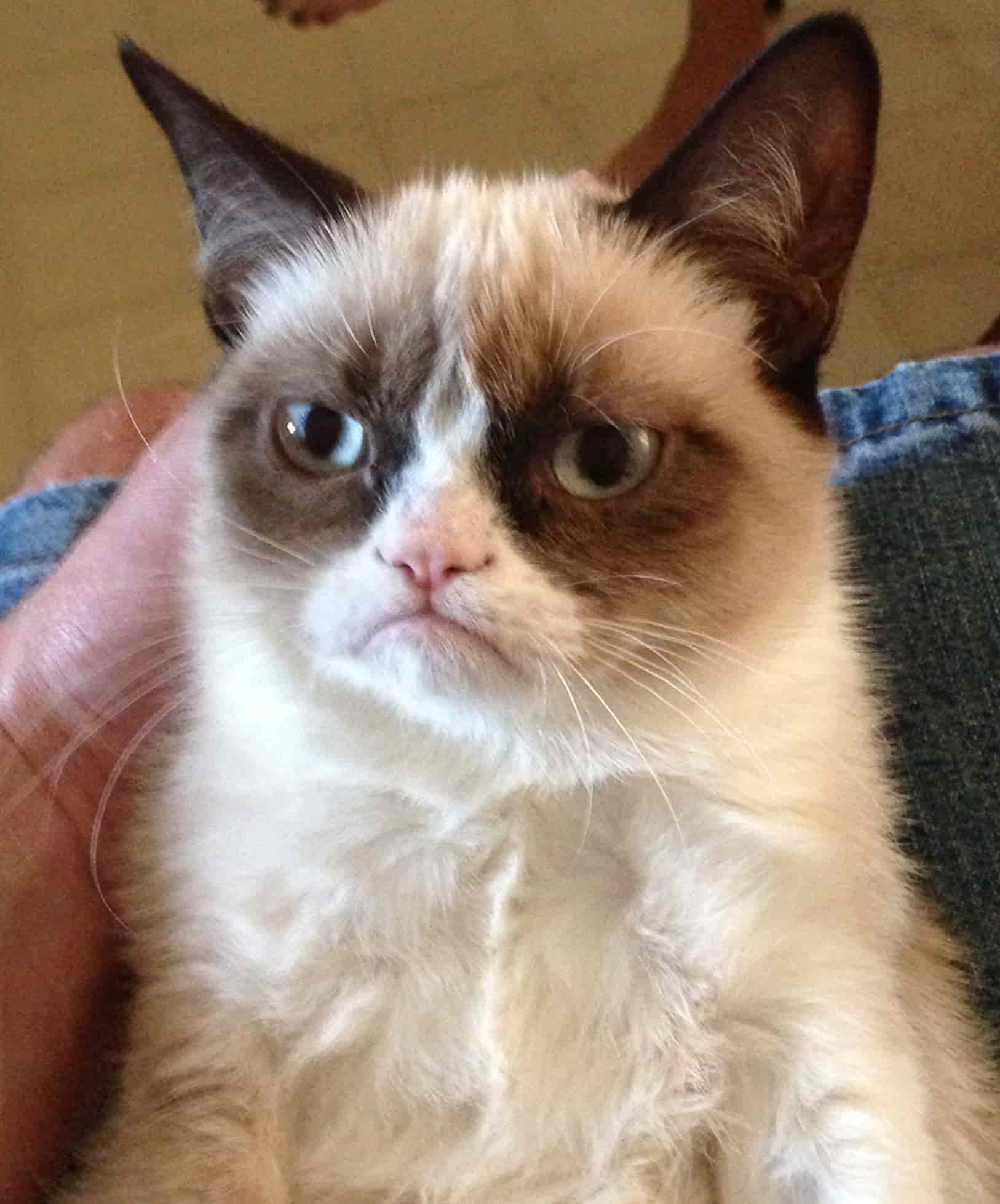 I am not biased, but anything cat-related is just so damn cute! The only creatures that look adorable while grumpy are cats. Their superior ego is just wholesome! It explains how this kitty, Tardar Sauce, probably hit much more success in her lifetime than ours combined. On September 23, 2012, her owner posted the picture on Reddit. Fast-forward, it is now a brand. Tardar Sauce became the official face of Friskies. Also featured in “ Grumpy Cat’s Worst Christmas Ever”! Grumpy cat’s legacy lives on after her death in 2019 on the internet. She even scored $83,000 as an NFT meme on the blockchain!

Side Eyeing Chloe – Sold at 25 ETH 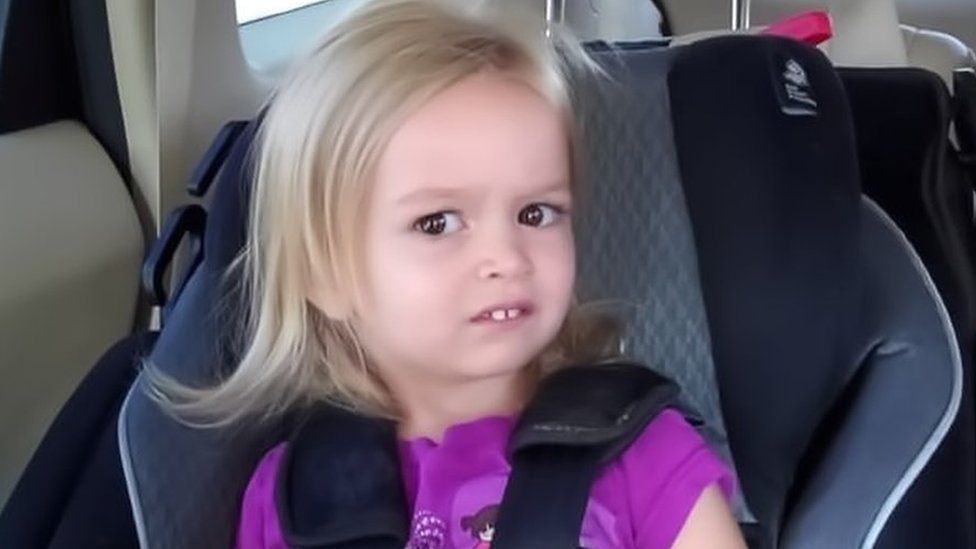 We’ve all seen this meme in our life, I’m sure. Here’s the backstory you’ve all been secretly curious about. It was a fine September month, the wind was chill exactly on the 12th of 2013. A mother of two, Katie Clem, uploaded a video reaction of her two daughters reacting to going on a surprise trip to Disneyland. Lily reacts like any normal little girl with joy. Now Chloe broke the internet with her uninterested judgemental side-eyeing face. She became an instant classic meme among us. Now in the same September month 8 years later on the 24th of 2021, the mom followed the hype train of auctioning her daughter’s famous meme as an NFT. Even though it didn’t bring in as much as the other NFT memes, it grossed a total of $76,377!

Okay, let’s establish a kind of rule. Babies and cats have superior charm. You know the drill by now, these are all taken as coincidence attempts to post cute memories on the internet. 11-year-old Sam was a huge adorable success in the August of 2007 when his mom snapped his happy picture! She did another smart move on April 10 of 2021 to follow in every parent-with-famous-meme-kid footsteps. This adorable baby, now 14, made a total of $32,355!

Catch your breaths. Tell me,  how did you score? Did we manage to surprise you with memes you’ve never seen before? Stay posted as we continuously update the trivia list when something saucy pops up in the NFT meme community!