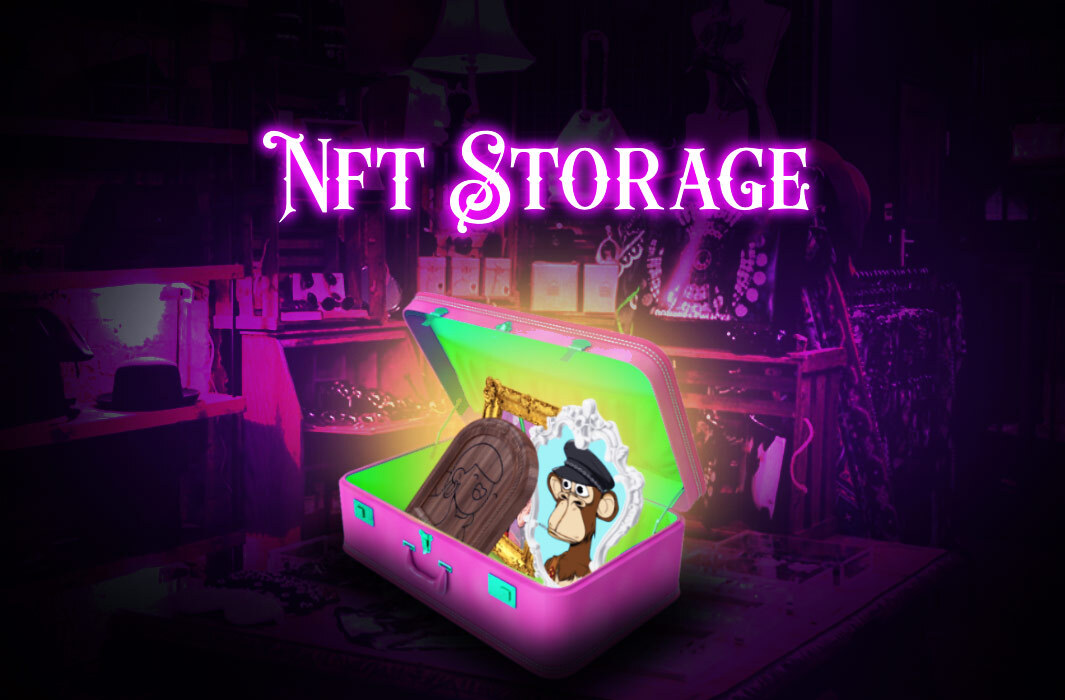 A question almost all NFT enthusiasts, and especially newcomers, ask is: Are NFTs permanent? Hate to break it to you, but the answer to this question is all over the place. It actually depends on what you mean by NFT. If you mean the non-fungible token ID that is written on the blockchain, then yes, NFTs are permanent. However, if you mean the quirky monkey image that comes with your NFT, then not so much. NFT storage is a thing, and it’s not the blockchain.  But the quirky image is the metadata of the NFT, isn’t the metadata the thing that gives NFTs their value? Well, yeah.

This might sound confusing at first, but don’t worry, I’ll explain.

What makes an NFT valuable? Sure, the concept of having a non-fungible token written on a decentralized blockchain is in itself valuable. NFTs act as a certificate of ownership or a receipt that prove that you own something. That something could be an artwork, song, film, or even a meme. It can be any media file that is pegged to the specific NFT you own. This media file is part of the NFT’s metadata. Therefore, if you own an NFT with no metadata, you basically own a certificate of ownership that proves that you own “nothing”. In short, NFTs are valuable as long as it links or refers to valuable data.

The metadata of an NFT is simply the tokenURI that exists in the NFT’s smart contract. It is basically a .json file that contains the different attributes of an NFT. However, the metadata needs to be stored somewhere where it can be accessible. Am I saying that the image that comes with an NFT is not on the blockchain? Exactly. In most cases, NFTs’ metadata is not stored on the blockchain. Instead, they are stored somewhere off-chain. Basically, if you own a Bored Ape Yacht Club NFT, its tokenURI of the NFT’s smart contract will reference another place where the monkey image is stored.

However, storing NFT’s metadata somewhere off-chain is far from being permanent. It’s the opposite actually. Metadata that is stored on centralized servers encounters a great risk of it disappearing since off-chain servers could shut down any minute. This renders the NFT worthless, and many NFT links have already broken down. 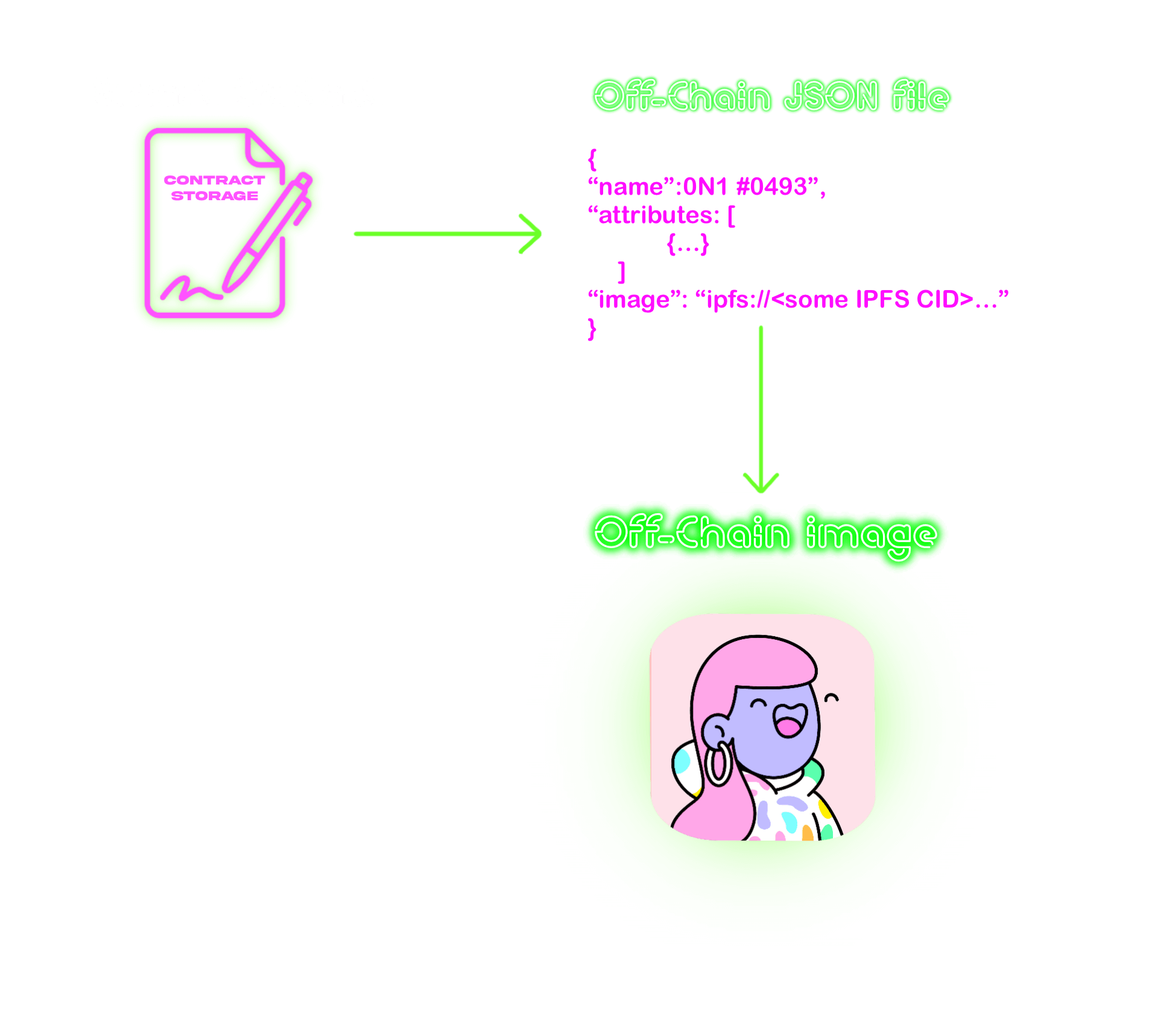 So does that mean NFTs’ media files will disappear any second now? Not exactly. Off-chain NFT storage is one of three ways to store NFT metadata. The other two ways are storing the metadata on-chain or on decentralized off-chain servers such as IPFS. 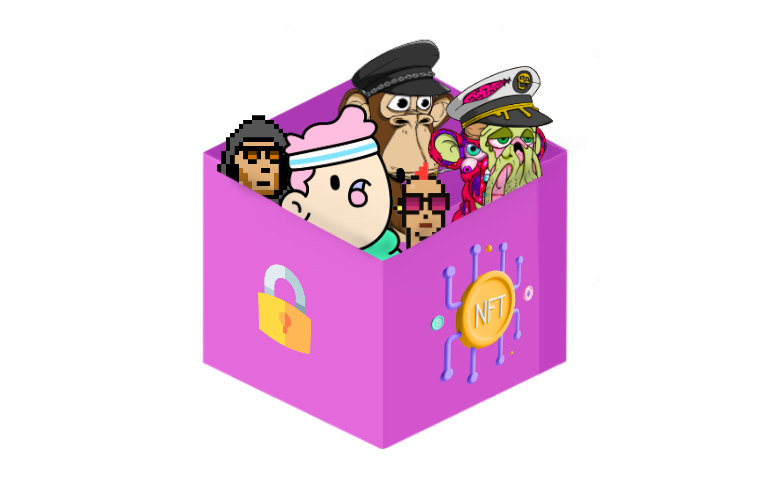 If an NFT as a token exists permanently on the blockchain, why not have its metadata written on the decentralized ledger as well? Well, this is a utopian solution. On-chain storage is very expensive. For example, to store a single ape image of a BAYC NFT on the blockchain, will cost thousands of dollars.  However, some NFT collections have managed to store their metadata on-chain!

Another example of on-chain NFTs is generative art NFTs. Deafbeef offers NFTs with a reconstructable output. That means that the NFT itself is a generative system that generates pieces of synthesized music with no need for off-chain servers to store it.

It’s safe to say that on-chain NFT storage is the best solution for NFT permanence. However, large files or images are hard to store on-chain, and that’s why off-chain storages exist.

By analyzing NFTs’ smart contracts, we can see that more than 80% of NFT media is stored off-chain. That means, the metadata of these NFTs exists on centralized servers, which makes it a big yet hidden problem. These servers could get shut down or hacked at any day now, which leaves you with an empty NFT devoid of value. These centralized NFT metadata storages can seriously harm the overall ecosystem of NFTs.

Even though Opensea, the number one NFT marketplace, lets users upload the metadata on more secure alternatives like IPFS, it’s a complicated process. Therefore, creators can choose to ignore the fact and upload their media files on centralized URLs. On top of that, you would think that huge NFT collections like Mutant Apes Yacht Club would opt to upload their metadata on IPFS, but hate to break it to you, but they use a centralized web server.

Another way to store off-chain NFT metadata is to use decentralized NFT storage like IPFS. Inter Planetary File System is a decentralized file storage system similar to BitTorrent. It’s a distributed hash table hosted by nodes that host files on a network. You can upload media files on IPFS and create its content ID where you can host it only on your node or distribute it on many nodes.

If this is too complicated, think of it when you download a file from BitTorrent. Torrent uses a peer-to-peer kind of system, meaning that the file you download is a file that someone else is uploading. That someone else is called a seeder (in this case a node). If no one is uploading the file you want, aka there are no seeders or nodes hosting the file, you can’t access it. However, the file is still there, but just not available. IPFS works exactly like that. The address or ID of the file is permanent, but the underlying file or asset could be easily lost.

Moreover, if the operator of an IPFS node deletes the data, then any IPFS URI linking to that data will no longer work. Therefore, it is true that IPFS is much more secure than a regular centralized server, however, the files stored on it are not permanent in any way. In addition, IPFS is a way to address distributed data but is not actually storage.

However, Filecoin is a project that uses blockchain technology to ensure the persistence of data by distributing files across a cryptocurrency network. Its primary benefit is to ensure that someone out there is storing the data. Filecoin is more or less IPFS with blockchain technology, and although it’s much more robust than regular IPFS, it still doesn’t guarantee NFT permanence.

The Problem with NFT Permanence

No matter what you try to do with an off-chain NFT storage, the file has to exist somewhere, and someone needs to constantly host it. Even if the NFT’s metadata is on Filecoin, you’ll have to trust that the nodes won’t suddenly shut down. However, Filecoin does serve some kind of security for the NFT’s media files. But basically, no storage system can guarantee the full permanence of NFTs, therefore, NFT metadata is not permanent, unless it is on the blockchain. Maybe in the future, as the blockchain keeps evolving, on-chain NFT storage could be accessible for all NFT collections, making NFTs live as long as the blockchain is standing.