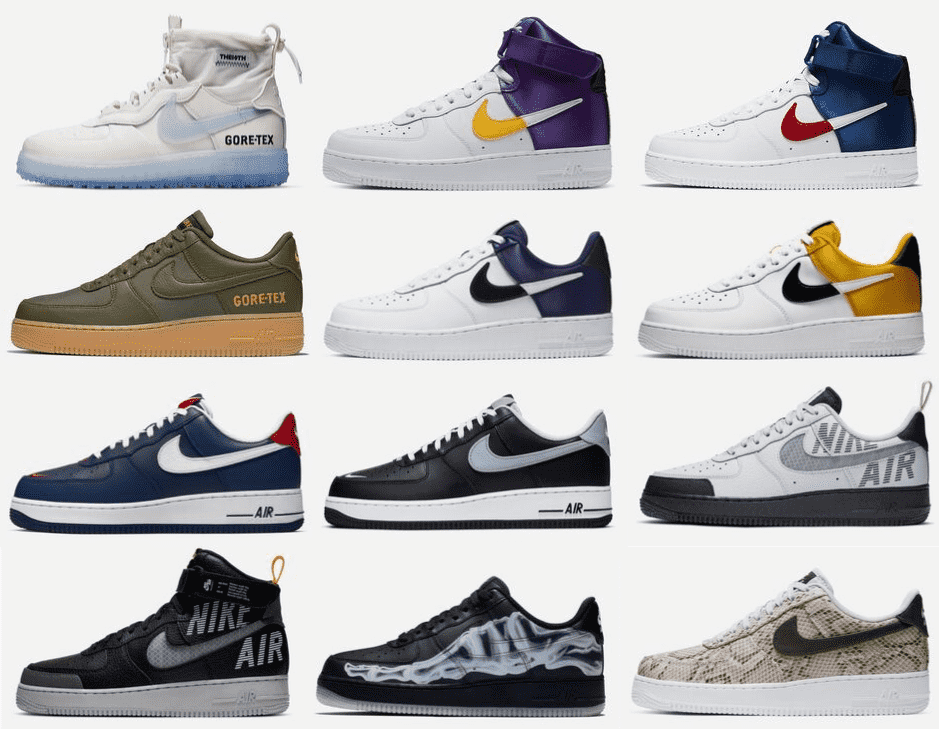 If Nike did anything right, it’s the Nike Air Force 1. The shoe that first launched in 1982 is one of the most iconic shoes in the industry! 37 years later and the Air Force 1 is still going as strong as ever. And collabs with artists like Travis Scott made that shoe even more popular. And now? Nike is hyping us all up with the AF1 FW19 collection that’s coming out in October through December. What a time to be alive! So let’s carry on and take a look at these beauties!

What does this collection include?

Nike is blessing us this fall with several different Air Force 1 packs. Whether it’s a new colorway or material, we want it all!!

These shoes, in both the high and low iterations, are resistant to the winter weather in style.

Our favorite high Nike Air Force 1 is coming back with a twist! An adjustable zipper bootie is added to the upper of the shoe and a Gore-Tex membrane is used to protect the shoe. Nike also opted for a semi-transparent version of the traditional midsole. This combo reminds us very much of the Nike x Tom Sachs Mars shoe. And we don’t necessarily mind that!

The shoes will release in two colorways: Black and White and will retail for $180 With the low version, the new Nike Air Force 1 is sticking to the classic look. The shoe features all-olive leather and nylon uppers with Gore-Tex lining and Gum soles! “Gore-Tex” logo is also sewn on the heel of the shoe. The shoes nod to NBA teams the Lakers and the Clippers through the color schemes. The Nike Air Force 1 feature the usual design with some fancy additions like a satin heel and – for the first time ever- a split swoosh!! The Nike Air Force 1 Low maintains the classic design while featuring the same changes as the High version. We’ve got us some cool looking satin heels in two colors: Navy and Amarillo along with split swooshes. Another addition to the shoe is the NBA branding on the heel and tongue. These sneakers will retail for 100$ (pretty affordable if you really love your team, ain’t that right?) Just in time for Halloween, you should grab your pair of the spooky Nike Air Force 1 Skeleton Black. The shoe will feature an all black upper and midsole. Its white counterpart was released in October 2018 and was very popular! The coolest part of these sneakers are the glow in the dark skeleton print on the upper and outsole (taking spook to a new level). So get ready to grab your pair of Nike Air Force 1 Skeleton for $130. These sneakers feature snakeskin printed uppers with a contrasting dark brown swoosh and the classic white midsole and outsole. Yellow, grey and blue versions of this shoe should also make an appearance. The swoosh pack releasing this fall will be a very cool addition to your AF1 collection! The Swoosh Air forces are coming out in two different colorways: Navy blue/red and Black/White. The key features are a mini swoosh logo on the toe box and the word “swoosh” on the U-throat instead of the Nike branding. This pack will retail for 100$ What’s new about these shoes though? In addition to this huge collection, a new Women’s Air Force 1 pack in 3 different colorways will be out this fall. So to all our lady sneakerheads, GET READY!

To cop or not to cop?

Whether you wanna flex or flip, these shoes are definitely worth copping. The Nike Air Force 1 is one of the most sought-out shoes out there, and any new addition to your collections will never go unnoticed. So start setting up your bot because you might need it for a successful cop.