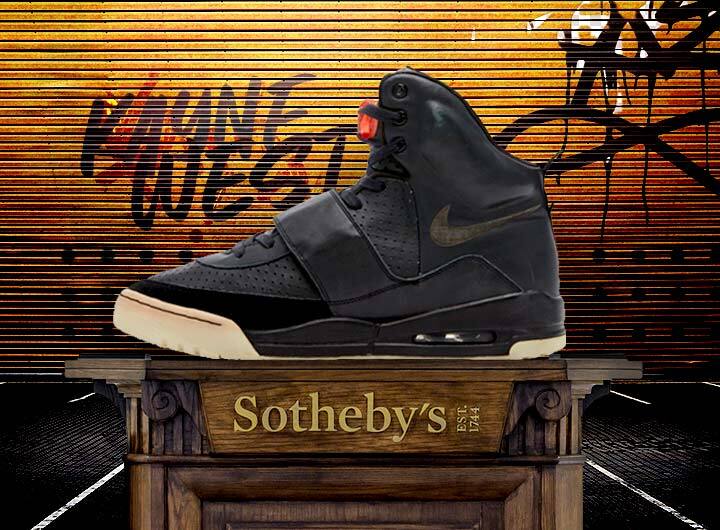 If someone is in need of proof that “hype” culture is at an all-time high, search no more, fam. A pair of Yeezy’s has sold for 1.8 million dollars just last week. Yes! Kanye West‘s Nike Air Yeezy 1 Grammy sneakers have just been purchased for almost two million dollars. Effortlessly, just like that.

Why the gossip behind this “Prototype” Nike Air Yeezy 1 Grammy sneaker?

Lots of gossip, and even more big headlines, but no rumors what-so-ever behind this one. Early on this April, we heard that the famous auction house Sotheby’s will be selling the only existing pair of Nike Air Yeezy 1 “Prototype”. The shoe is famous in the sneaker community for “Prototype”. And they showed up first when Kanye wore them at the 2008 Grammy Awards. We still remember how emotional his live performance was. West donned these Ye’s for the first time while he performed “Hey Mama” on stage, honoring his mother who had just passed away a few months prior.

On a brighter note, though, aside from his lows, Kanye had many highs during that time. Not only had he just released his 1 million sold copies of his “Graduation” album, but he also earned 4 trophies for “Homecoming”, too. Along with all the emotions that rushed as he sang for his mama, teared-up eyes were also glued on something else that stole the show: The Nike Air Yeezy 1 Grammy “Prototype” sneakers.

Last week it was confirmed that these sneakers have publicly sold, smashing the estimate of $1m USD after selling for an astounding $1.8m USD. This shoe is considered to be the rarest Yeezy sneaker ever!

This Grammy debuted shoe never made it to the actual market. In 2017, though, a pair was on sale on Flight Club, where they were sold for $100,000. It’s true that these Nike Air Yeezy 1 Grammy sneakers might not have been the best of Kanye’s designs, but they held a hefty price tag simply for being a “Prototype”.

“The sale speaks volumes of Kanye’s legacy as one of the most influential clothing and sneaker designers of our time.” Brahm Wachter, Sotheby’s head of streetwear and modern collectables, said. And no one could argue with that. Honestly, Wachter put words perfectly regarding this news.

Back then, Kanye designed this sneaker with Nike’s Mark Smith and Tiffany Beers, mainly inspired by earlier Air Jordan sneakers. The strap over the laces was introduced to the shoe; a highlight that was planned to become the Yeezy signature. The black leather size 12 shoe featured glow-in-the-dark outsoles, which corresponded to West’s Graduation/Glow in the Dark Tour vibes. Topping it off, the Nike Air Yeezy 1 Grammy “Prototype” featured the brand’s signature Y medallion lace lock. This element was dressed in dark pink, adding some color to the all-black shoe.

With Yeezy’s shifting from Nike to Adidas in 2013, this sneaker is nothing, but leftover remains of a creative collaboration that no longer exists. The Yeezy collaboration between Kanye and the German sportswear brand was called by the latter as “the most significant partnership ever created between an athletic brand and a non-athlete.” Afterall, the Yeezy brand brought in an estimated $1.7 billion in sales for Adidas in 2020, according to Forbes.

But Who’s the Lucky Buyer? No, it ain’t no filthy rich guy. “Rares”, a sneaker investment platform, purchased their official ownership from original collector Ryan Chang through Sotheby’s private auction. Rares offers a digital space for the obtaining and flipping of award-winning sneakers. Basically, the company attempts to revolutionize 21st century footwear culture. And what better way to do that other than through the birth of Yeezys, possibly 2010’s most iconic sneakers?

How Many Records Did This Shoe End-up Breaking?

This sale marks a huge milestone for a publicly recorded sneaker sale. Former records include: the Nike “Moon Shoe” sold for $437,500 USD and the Air Jordan 1s, sold at $560,000 USD in May 2020. Following that, we witnessed a few AJ1s that sold for almost a million dollars, but no shoe came even close to this Sotheby’s sale. This shoe broke the record for the most expensive public sale of a sneaker by almost three times! And those were 1985 Jordans that Michael Jordan wore himself. Can you believe it? Not only that, but this Nike Air Yeezy 1 Grammy sneaker has also become the first recorded sneaker sale for over $1 million. No other pair of sneakers has ever sold for over million, before. Yet, this Kanye West’s has auctioned for almost double.

“Our goal in purchasing such an iconic shoe – and a piece of history – is to increase accessibility and empower the communities that birthed sneaker culture with the tools to gain financial freedom through RARES,” said Gerome Sapp, co-founder and CEO of Rares.

Want your own piece of the Air Yeezy 1 prototype?

As a sneaker investment company, RARES is offering people a chance to obtain a small share in the Air Yeezy 1 prototype. Rares already explained the process in a press release. They buy a sneaker, get interest in it as a tradable security through the Securities and Exchange Commission. Then, ownership is divided into fractional shares. So, if you’re interested in having a stake, you can simply reserve a spot on RARES’ website.

For more on the latest sneaker info, keep it locked here at ANB, always.