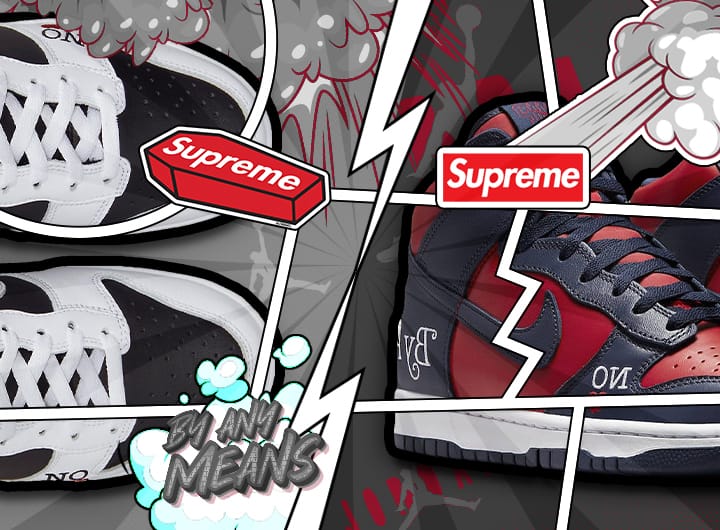 Do you know which kicks were the best-selling Nike sneakers of 2021? DUNKS. And, to be even more precise, the Nike Supreme Dunks drop “Stars” with the highest price premiums of the year! And now, this epic sneaker collaboration is back to end the year in a BLAST in three separate colorways.

The “By Any Means” sneaker collection with Nike features three separate pairs of Nike Dunk Highs with different characteristics. It also gives a nod to Supreme’s “By Any Means” collection and slogan that dropped back in 2008. So, let’s get down and dirty on the pairs that might just break the bank for a lot of us!

The Nike Supreme Dunks drop features three colorways of the Nike Dunk High – colors for all! The capsule comes in a bright green/yellow “Brazil” colorway, a navy/red colorway, and a black/white colorway. You can find the brand’s slogan “BY ANY MEANS” embroidered across the heel of all three Dunks. Also, embedded into the phrase itself, is a play on John Jay’s Nike NYC Logo!

Other notes include the “SUPREME TEAM” in the Supreme cursive signature font on the top of the heel. Plus, the words “NO LOVE” embroidered at the toe with a little red heart! Another common feature between the three Nike Supreme Dunks is the material. They all feature a leather base with contrasting paneling on the toe box and Swoosh. And, the tongue tags all feature a Supreme and Nike Swoosh logo with clean white midsoles!

Finally, the insoles have the Nike SB x Supreme branding in a bright Supreme-red color!

The actual Nike Supreme Dunks drop date has not been confirmed YET. Nike’s obviously building some momentum here! But, rumor has it that they’re set to drop in 2021 – a holiday special maybe? What we do know for sure is that this is most definitely a release you do not wanna miss out on. And, do we even have to tell you about the Supreme selling time? Even the most WTF items sell out within seconds of the release.

But, this isn’t even a WTF item! These are extremely epic, cool-looking Nike Dunk Highs WITH Supreme hype. This means everyone in the industry (even those who know nothing) will be copping these kicks! But, only those running sneaker bots will come out victorious! Not to sound too much like a pessimist. However, if you don’t own a sneaker bot, why bother trying?

If there’s any myths about botting in this game, it’s about copping WITHOUT bots. So, if you truly want to have a fighting chance at copping the Nike Supreme Dunks drop, get a bot. And, if you wanna be even smarter about it, get a bot that cops Supreme. Because, it’s 100% guaranteed Supreme will host a release on their website.

Luckily for you, we’ve got just the bot for the job! We’re gonna give you a two for one (more like a 100+ for one if we’re being honest!). You see, AIO Bot has the ability to cop over 100 online sneaker retailers on any release you like. Add to that the epic Supreme bot option that you can get, you’ll have a win-win situation for sure!

All you have to do is check it out and use it for whatever you want. The holiday season is coming up either way. You’re gonna need it for the Nike Supreme Dunks and more! So, click on the button below to check it out!