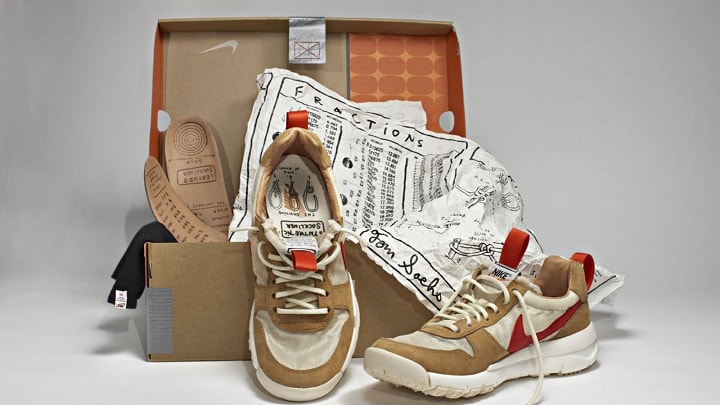 Once again, we’re diving into our memory pool and remembering some of the coolest sneaker drops. And today, our throwback goes back to one of the OG space-theme kicks! The Nike Tom Sachs collaboration is one of the simple kicks with an extravagant value. And we sure love sneakers with these qualities! So let’s go over everything you remember (or don’t) about this partnership together!

Tom Sachs: Interesting Artists Are Hard to Come By

But if Tom Sachs is anything, he’s interesting. The public eye first noticed the artist back in 1994, when he did a pretty controversial Christmas display at Barney’s New York. So he’s an artist, and more specifically, a sculptor. He’s also famous for his fashion-meets-violence sculptures. This falls under his focus on consumerism, which basically means that your worth depends on the items your own. So all in all, this a man with big ideas and big illustrations of the ideas! Interested yet?

The idea of one of the biggest sportswear companies in the world and the DIY artist collaborating was a long shot. Yet, it happened! He collaborated with NASA prior to the announcement of NikeCraft. He literally has sculptures of NASA spacecrafts in his studio. So a space theme for a pair of kicks isn’t really surprising.

Back in 2012, the first pair of Nike sneakers dropped and they naturally sold out real fast. The upper featured a tan suede upper, red swoosh, and white plastic-like material. Apparently the white Vectran material is the same one used for the Mars Excursion Rover airbags! The kicks are worth more than 10x their original price. So if you’re keeping a pair to flip on a bad day, you’re in luck! The initial release, although successful, wasn’t to the artist’s liking. Luckily, five years later, he and Nike decided to rework the kicks and upgrade the weak points. Thus, the result was a change of materials! A polyester mesh replaced the Vectran material on the upper. Moreover, the second edition was a bit more streetwear-friendly! Getting your hands on these babies wasn’t any easier though. You had to successfully complete an hour-long “Space Camp” for early access to purchase the Nike Tom Sachs kicks. This was the artist’s way of shooing off the impostors who only wanted the kicks for their resale value! Nike Tom Sachs for the Kiddos

Fast forward two years. Nike and Tom Sachs came back with a surprise drop. Not but really, it was surprising. Because they dropped the Mars Yard for the tiny sneakerheads! The kicks dropping in toddler and infant sizes. That way, the family could have a sneakerhead bonding time together. We bet some of you wished they were still little kids… We know we did! It’s true, 2020 is a cool space year for Nike with the ISPA and Space Hippie packs. But we can’t deny how the Nike Tom Sachs partnership probably paved the way! And if there’s anything we wish could come back to lift our spirits in 2020, it’s this pair of kicks.

If you liked today’s TBT, make sure you check out previous ones here!