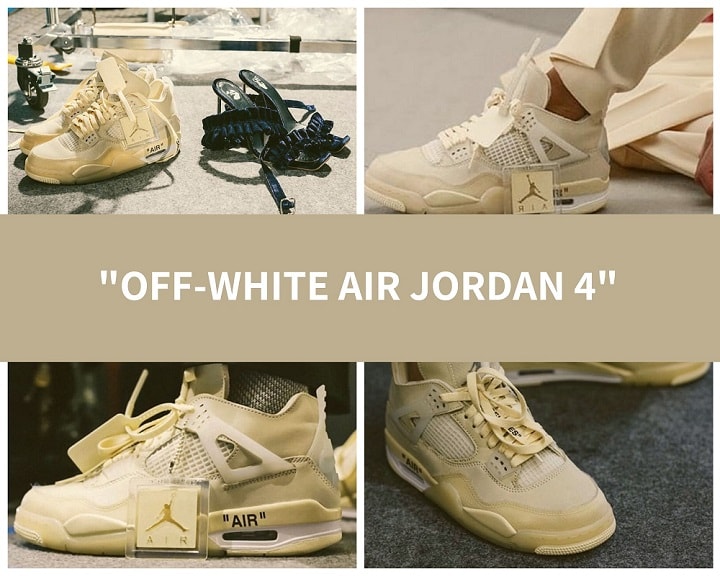 Remember when everyone thought the Off White Nike Air Max 90 was the last pair of sneakers to drop? Good times! Instead of being his last release, Virgil Abloh just took his Nike and Air Jordan collaboration to the next level! What started with “The Ten” collab in 2017 was just the tip of the iceberg. However, when we hear of an upcoming Off White Air Jordan, we immediately know that it’s going to be a must-have, even today! So what releases await us today?

The Off White Air Jordan 4 Isn’t a Surprise!

Let’s go back in time. Not too long, just back to June 2019. Virgil Abloh opened his “Figures of Speech” Exhibition at the MCA. And guess which pair of kicks was teased among a lot of others? You guessed it, the Off White Air Jordan 4 “Sail”. But, just like a lot of other prototypes, the kicks were nothing more than a rumor.

However, Virgil Abloh teased the Air Jordan 4 in some of his stories, kinda confirming the collab.

Fast forward to Off White’s FW20 runway show at the Paris Fashion Week. Models wore and showcased what’s probably the next huge Off White Air Jordan collab! So we can safely assume that the kicks might be women’s exclusive.

Why Is This Collab Popular?

Well, two major things come into play here! First of all, we already covered how hype every Off White sneaker release was. The most recent Off White Air Jordan 5 is just a huge proof of that! The second bit is about the shoe itself! The Air Jordan 4 by itself is one of the coolest Jordan silhouettes out there. It’s so popular that many big names revamped the silhouette in their own way. Some of these names are Kaws, Levi’s and Travis Scott… TWICE! Remember that purple colorway that made us wish we were friends and family? All these collabs proved to be worth a while, and lots of chaos. So adding Off-white to the mixture only means the hype will go up!

The kicks feature sail nubuck uppers along with a sail midsole, the plastic cages and panels are translucent and blend perfectly well with the color! And let’s face it, it’s not an Off White Air Jordan collaboration unless the midsole bears the “Air” print with the lace tag, that is also sail colored!

We know, we know. You want the release deets. Unfortunately, none are available yet… But! We expect that the kicks will release sometime in late summer since the kicks were part of the Fall/Winter collection. But who knows, Virgil might be up to a lot more shenanigans than what we know of! In addition to that, the women’s Off White Air Jordan 4s will probably be one of the Jordans that can make you a lot of money!

Will the Kicks Be Worth the Cop?

Naturally, all previous Off White collaborations were worth running your bots, and so is this one! You can never go wrong when copping Virgil’s kicks. Meanwhile, you should check the upcoming Nike Fear of God 1 “The Question”, for which we all have really high expectations! And don’t forget to keep it locked on our blog for the latest sneaker updates!