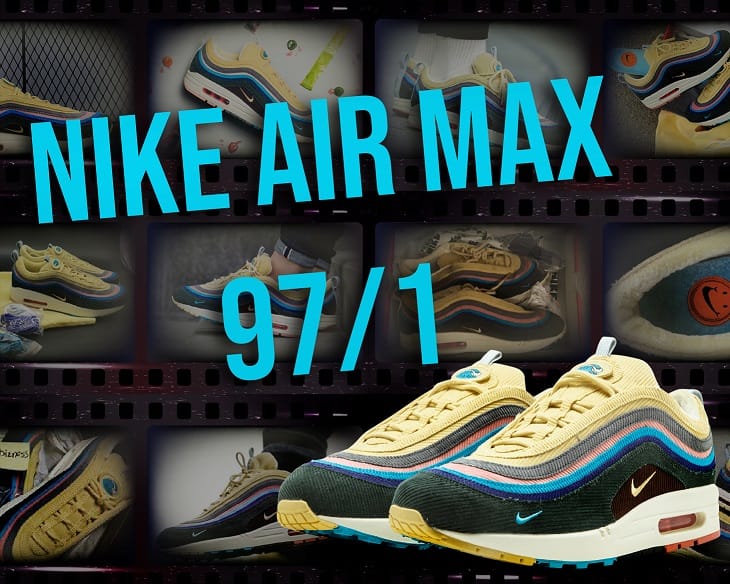 Who Is Sean Wotherspoon?

Sean Wotherspoon is an American Youtuber, sneaker collector, store owner, and sneaker designer. He was born on March 3, 1990. So happy 30th birthday! He co-owns the secondhand sneaker and streetwear store Round Two which currently has 7 branches throughout the US. Also, his Youtube channel “Round Two The Show” which started in 2015 has more than 200k followers, and it’s still on today! Finally, he’s the mind behind the epic Nike Air Max 97/1!

Throwback time! Every year, Nike celebrates the Air Max Day on March 26th. However, the 2017 celebration introduced us to Sean Wotherspoon’s design that won the Air Max Competition. The kicks are a colorful hybridization of two of the most popular silhouettes: The Air Max 1 and 97!
The sneakers feature a very colorful corduroy Air Max 97 upper. Wotherspoon seems to have a thing for this fabric, you’ll see why we’re saying this later. The midsole though? It’s our favorite Air Max 1! It’s the ideal baby of both silhouettes! And, it’s a really happy pair of shoes because the first thing you see before you wear it is the smiley-swoosh-face on the insoles.

How Popular Is That Silhouette?

The pair dropped on November 11, for $160. So if you were one of the lucky ones who copped for the flip, well congrats. Sean Wotherspoon’s design actually resells for an average of $1,294 with the extra accessories. However, on Air Max Day 2018 the kicks restocked and this drop resells for around $986 on average.

Nike and Sean Wotherspoon: We Are on a Break!

We can kiss our hopes of a new SW x Nike collab goodbye. Because Sean Wotherspoon himself is done working with Nike for now. But is it really that way? Or is he smoothing the fact that he’s done for good? Whichever the case, what we know is that he kept himself busy by teasing the industry with his upcoming collabs with brands like Adidas, Asics and Guess!

Remember what we said about Sean Wotherspoon’s love for corduroy? Well, he’s apparently moving on from Nike with a new three-way Asics-Atmos sneaker collab that includes… Corduroy! However, we can’t help but notice how eye-catching the upcoming Gel-Lyte 3 is! The upper is also customizable because the Asics branding can be changed using hook and loop fasteners and the corduroy on the upper is removable just like the Nike x Clot sneakers!

Guess x SW? Where Are You?

Less than a year ago, Sean Wotherspoon teased samples of a Guess sneaker collaboration. The last time we checked, the kicks were vegan-friendly and still in the experimental phase. Whatever happened to that?

This is a very familiar scenario. It kinda reminds us of everything that went down between Nike and Kanye West. And will the kicks with Sean Wotherspoon’s signature be as successful as the Nike Air Max 97/1? As we already know by now, Wotherspoon is a very sustainability-oriented person! And he’s using all the influence he has on the sneaker industry to market vegan kicks!

What we know for sure is that the 97/1 will become even more valuable when his new vegan collaboration drops! The collab will be an Adidas Superstar, it’s 100% vegan-friendly and made mostly out of recycled material. You know, keeping up with the latest fads and trends in the game!

2020 is already very busy for Sean Wotherspoon. And we can’t wait to see what more he has to offer! In the meantime though, did you check on how is the Yeezy 350 V2 Frozen Yellow doing?