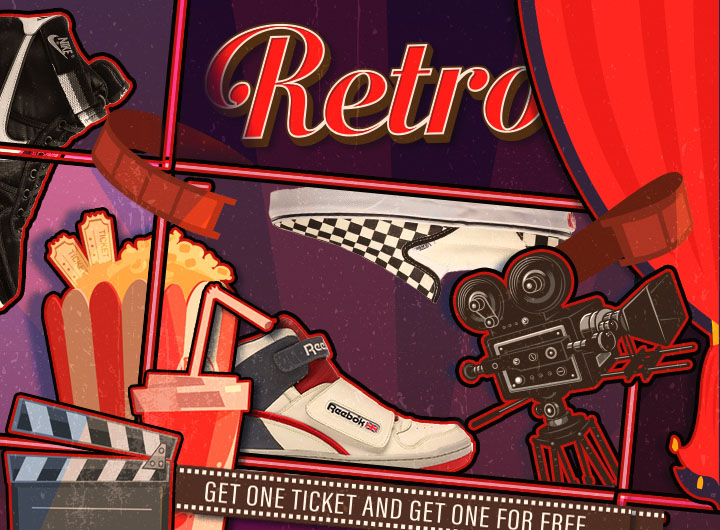 The coolest thing about being a sneakerhead is finding sneakers in movies! When you’re just watching some of the most iconic movies, and discover an awesome shoe cameo. Not only does this make those sneakers SO MUCH more popular, but you’ll also get tons of flexing capabilities!

It’s not just about sneakers that take inspiration from your favorite movies or TV series. It’s not about a specific colorway. Nope. These sneakers actually starred in these movies. And, for sneakerheads all over the world, these kicks were the highlight of the movie! So, here are our 13 most iconic and timeless sneakers in movies EVER! 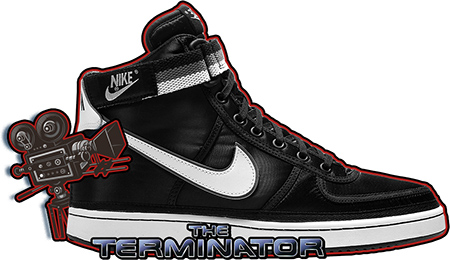 First, we’re starting with very special sneakers in movies – the Nike Vandals from the 1984 ‘THE TERMINATOR’. In the movie, Kyle Reese goes back in time to protect Sarah Connor from the Terminator. Of course, it’s only natural that when you time travel, you’re gonna come out completely naked. And so, he breaks into a department store and picks up a pair of Nike.
“I’ll be back” – The Terminator 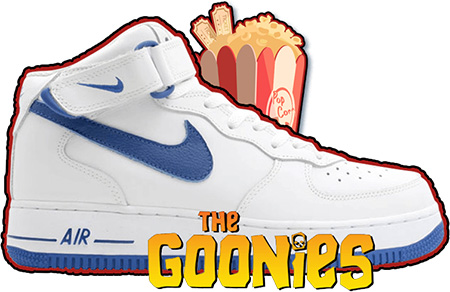 Also, more epic sneakers in movies include the Nike Air Force from 1985’S ‘THE GOONIES’. They are literally the definition of slick sneaker – literally! The kicks released oil from the heel to absolutely kick the Fratellis’ ass! Other sneakers debuting in the movie include the Nike Vandal Supreme and Terra TCs!
“Goonies never say die!” – Mikey

Next, we’ve got the Nike Internationalist from 1995’s ‘THE BREAKFAST CLUB’. Although you wouldn’t expect this movie to be on our list of sneakers in movies. But, when Anthony Michael Hall – playing the nerd Brian – walked in his Nike Internationalist; it was a game-changer!
“Does Barry Manilow Know That You Raid His Wardrobe?” – John Bender 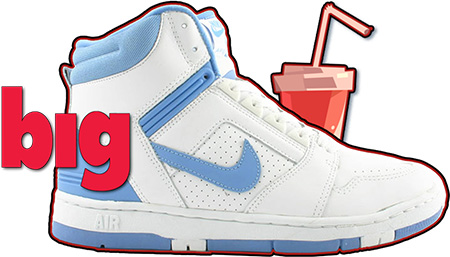 So, if there’s anything we’re gonna take from this list of sneakers in movies, it’s that Nike rocks! Oh, and so does Tom Hanks! And so, in the 1988 movie ‘BIG’, Tom Hanks wears the Nike Air Force 2 in a White – Blue colorway! It is definitely one of the most memorable movie scenes of the decade! He wears it while rocking the giant light-up piano!
“I wish I was big.” – Josh Baskin 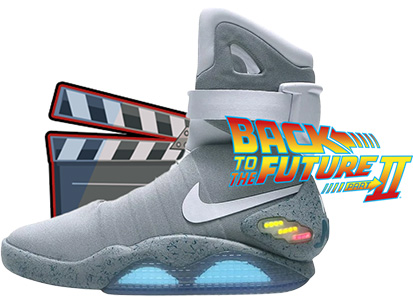 And, of course, we can not forget about the most iconic sneakers in movies – the Nike Air Mag! This is another genius creation from the mind of Tinker Hatfield. It debuted in 1989’s BACK TO THE FUTURE II as Marty McFly and Dr. Emmet Brown zoom through time! It had self-fastening laces and light-up panels – a true futuristic sneaker! Also, it is a very super-limited sneaker. So much so that the (2011) release holds an average resale value of $14,678!
“Roads? Where we’re going, we don’t need roads.” – Dr. Emmet Brown 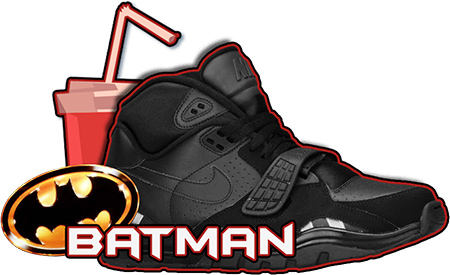 It is only natural that one of the most epic movies in time should feature some epic sneakers as well. And so, for these sneakers in movies, we’re talking about the Nike Air Trainer II from 1989’s BATMAN. Of course, we know what you’re thinking – Batman wears a suit. Well, yes. But, he also wears an all-black Nike Air Trainer II!
“Do I look like I’m joking?” – The Joker 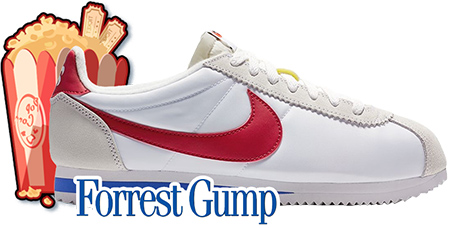 And, we can’t miss out on one of the most iconic sneakers in movies! It is the Nike Cortez from 1994’s ‘FORREST GUMP’. Forrest receives a pair of the OG White – Varsity Royal – Varsity Red Cortez as a gift. THEN, he decides to literally run all over the country wearing them! A straight message to the original purpose of Cortez sneakers – perfect track shoes.
“My name’s Forrest Gump. People call me Forrest Gump.” – Forrest Gump 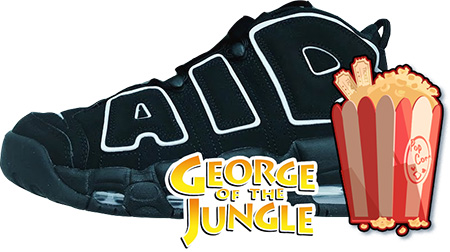 Well, considering George spent the most part of his early life barefoot and a loincloth, Nike’s are a HUGE upgrade. George goes back to his homeland in a UPS crate – do not try this at home, folks! As soon as he gets out of the crate, he opens up a pair of Nike Air More Uptempo. He laces them up, and starts running! True sneakers in movies cameo. Because, honestly, that was it! That was the scene! Nothing else… BRILLIANT.
“To swing or not to swing?” – George 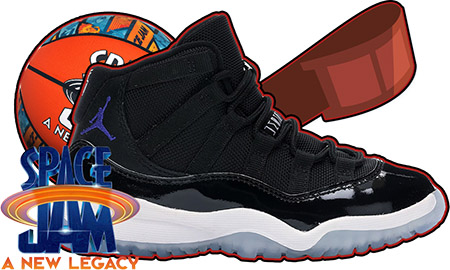 Now, this is where things get TRULY interesting for sneakers in movies! It isn’t ANY sneaker, the Air Jordan 11 SPACE JAM is still one of the most coveted sneakers out there. Michael Jordan debuted the sneaker on court. And then, in the 1996 movie SPACE JAM which also included the Jordan 9s, Jordan 10s, and even a Jordan 2!
“Whatever you do, don’t forget my North Carolina shorts.” – Michael Jordan 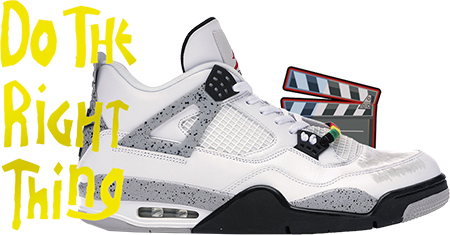 So, this movie has a huge influence on sneaker culture – especially in its impressive sneaker lineup. It’s not just about sneakers in movies, some of the plots actually revolved around kicks! Seeing a pair of scuffed-up Air Jordan 4s on Giancarlo Esposito’s Buggin’ Out! The movie also featured Nike Air Trainer IIs, some Cortez sneakers, and even the Nike Air Revolution!
“Always do the right thing.” – Da Mayor 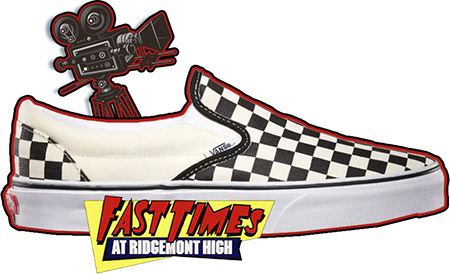 These slip-on sneakers were all the rage back then, all because of their cameo in FAST TIMES AT RIDGEMONT HIGH! The Vans Checkerboard Slip-on sneakers were actually the choice of Sean Penn – playing the stoner surfer, Jeff Spicoli. At that time, it was okay for actors to decide what they wanted their costumes to look like. And so, Vans has him to thank!
“That’s the idea, Rat. That’s the attitude.” – Mike Damone 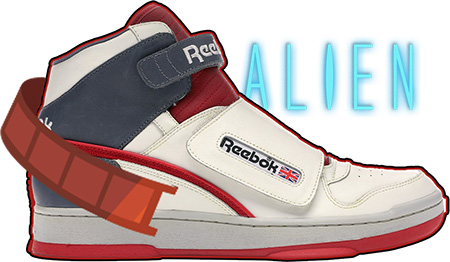 Sometimes your favorite sneakers debut in the most unlikely places – like on a spaceship! The Reebok Alien Stomper was the star of the 1986 movie ALIENS. It is definitely one of those sneakers in movies with the most nerve-wracking screen time!
“We’re on an express elevator to hell, goin’ down!” – Hudson 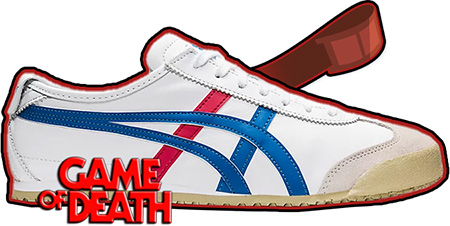 Finally, Bruce Lee’s Onitsuka Tiger from GAME OF DEATH. Bruce wears a pair of the Yellow – Black and Black – White – Onitsuka. But that was because they filmed the movie in two parts. The movie began filming in 1972, Bruce stopped for a bit to work on ENTER THE DRAGON. Then, in 1973, he died an unexpected and tragic death.
“Let it go. What must be done is being done.” – Billy Lo