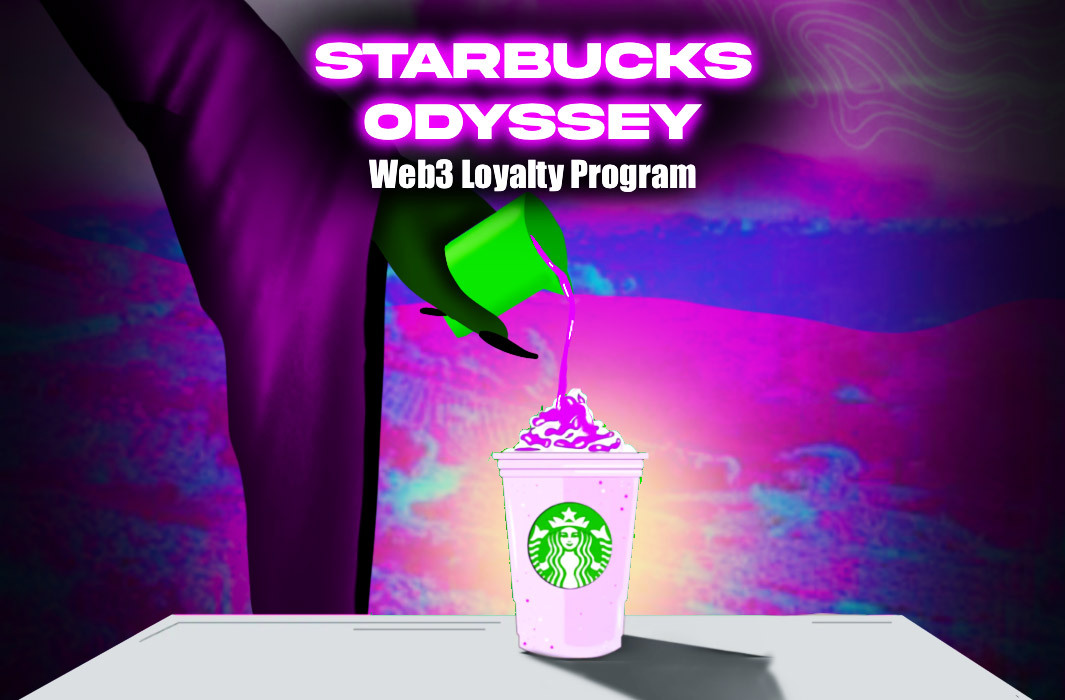 Major world-renowned brands have had their fair share of Web3 initiatives and blockchain technology incorporation. Fashion brands in particular have taken Web3 by storm and profited off of the forthcoming technology revolution. However, the surge in popularity of this new era of the internet brought with it food and beverage-related NFT projects. The coffeehouse chain giant Starbucks has taken the leap of faith by recently launching its Web3 loyalty program, Starbucks Odyssey. While it doesn’t mean that you can virtually sip your tasty iced white chocolate mocha, it does offer various benefits and coffee-related experiences.

Coffee giant Starbucks announced earlier this year its plan to enter the Web3 universe with promises to launch NFT collections based on the brand. The statement included Starbucks’ environmentally inclined approach, stating that it will build its NFT projects on a sustainable Web3 platform. Although the coffeehouse chain didn’t state which blockchain it’s likely to operate on, it did imply the possibility of “multi-chain” NFT collections.

In a blog post, Starbucks’s chief marketing officer Brady Brewer and advisor Adam Brotman stated that Strabucks’s approach will differ from how people view and use NFTs. Instead of selling NFTs in a speculative way, Starbucks would explore NFTs’ potential. Like their ability to serve as an access pass to exclusive products or experiences. “We believe NFTs have broad potential to create an expanded, shared-ownership model for loyalty, the offering of unique experiences, community building, storytelling, and customer engagement.”

Starbucks’ approach to NFTs is much more premeditated than other brands. Many brands have tried to jump into the Web3 pool with no to little thought. Starbucks however plans to enter the new Web3 era with a serious plan to expand the business. Not to create a “stunt” project. It views digital collectibles as an extension of its already existing customer loyalty program. And that’s exactly what the famous coffeehouse did when developing its new and Web3-focused Starbucks Odyssey loyalty program. 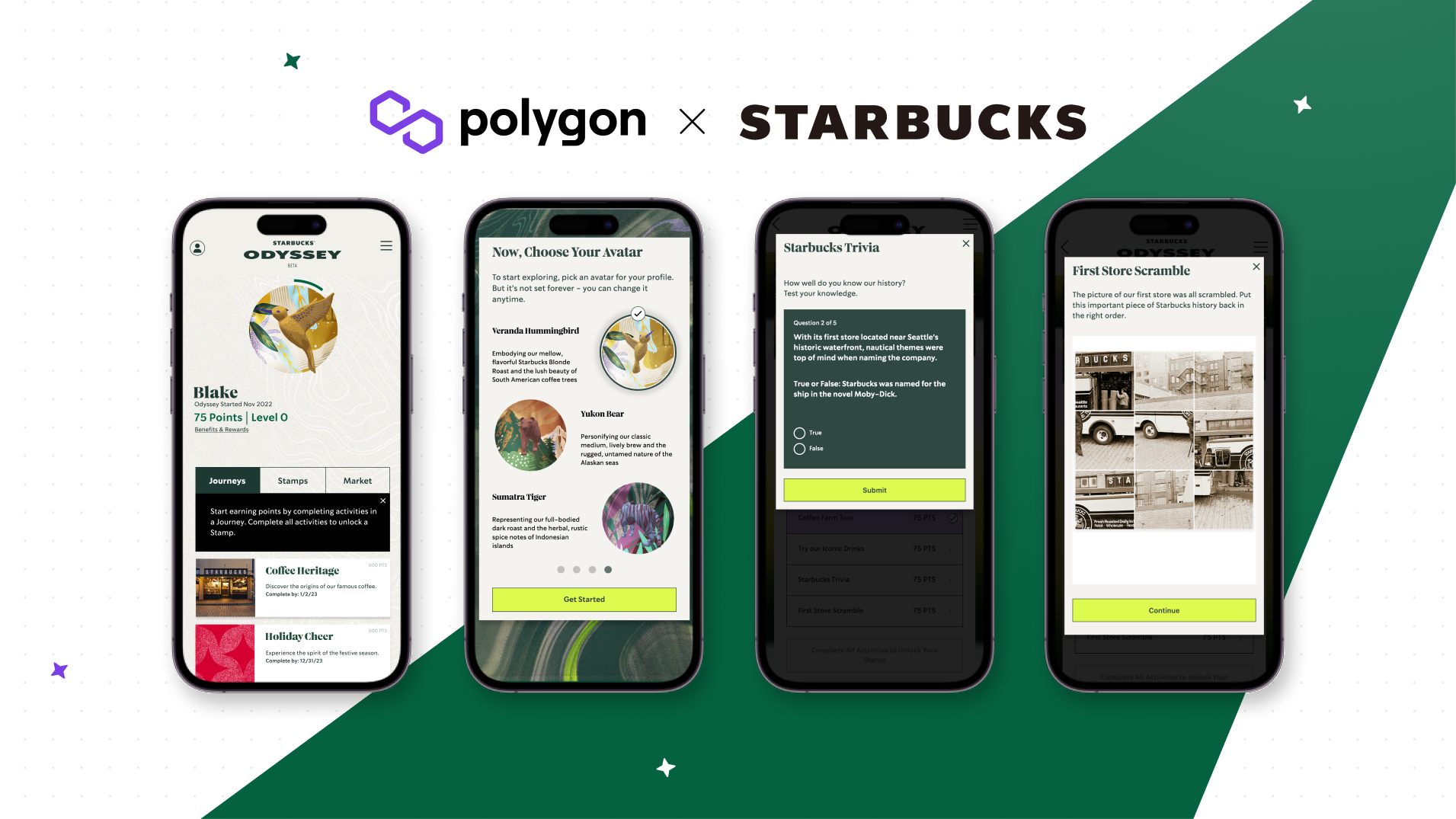 Back in September 2022, coffeehouse chain Starbucks announced its first Web3 project Starbucks Odessy. The project was declared to be built on the already established Starbucks Rewards loyalty program with the addition of incorporating digital assets. The already existing Rewards program offers customers to collect and earn “stars”. Which can be exchanged for other perks, such as a free drink. Moreover, Starbucks Odyssey is to broaden the types and number of rewards customers can have by introducing NFTs and Web3 technologies.

Starbucks developed Odyssey with the help of Forum3’s co-founder and former Starbucks chief digital officer Adam Brotman. Brotman was the developer of the existing Starbucks loyalty program. However, the platform is in a way obscuring the fact that it is built upon Web3 and blockchain technology. That is to say, non-tech people and individuals who did not read about the loyalty program beforehand will most likely not know that they are being rewarded with NFTs.

Starbucks advisor Brady Brewer explained, “It happens to be on blockchain and web3 technologies, but the customer — to be honest — may very well not even know that what they’re doing is interacting with blockchain technology. It’s just the enabler”. This opened up the discussion for crypto skeptics to point out that if users do not know it’s a blockchain-based program, then it is simply an ordinary loyalty program.

Crypto-skeptic and former Coinbase investor Liron Shapira stated that “The choice of blockchain technology to track the ledger of who currently has what in this system is insane since Starbucks is fundamentally a trusted party in the system.” He also stated that if the Starbucks Odyssey succeeds, then other brands should copy the loyalty program. However, they should ditch the underlying blockchain technology.

How Does it Work?

To have a Starbucks Odyssey experience, first, interested individuals have to be members of the existing Starbucks Rewards loyalty program. On the web app of the Rewards program, users can navigate through the different “journeys” a.k.a activities. These Journeys range from interactive games, taking quizzes, and playing puzzles, to taking a virtual tour of Starbucks.

After completing the journeys, members can collect rewards as digital collectibles called Stamps. Stamps are Starbucks’ way to tiptoe around the word NFT to not scare away potential non-techy customers. These NFT Stamps are hosted on the Polygon blockchain and will be available in a more limited-edition format available for purchase. Another approach Starbucks is taking to diverge the Web3 application is by letting members pay for NFTs in fiat currency. That means members can use their debit or credit cards. This way, customers wouldn’t be intimidated by the words cryptocurrency or gas fees.

Another way to obtain Stamps is by accumulating Starbucks points. Customers can participate in a “real-life journey” by making an in-store purchase. When  Rewards program members buy a drink or any other item, they can scan their Rewards card to earn points in the Odyssey app. At around 500 points, members can earn Stamps. Stamps can also unlock many benefits and rewards such as virtual coffee-making classes or special access to events. At a higher level, it can also unlock a trip to the Starbucks Hacienda Alsacia coffee farm in Costa Rica!

On December 8, 2022, Starbucks launched the beta version of the Starbucks Odessy loyalty program to a small group of waitlist members, including customers and Starbucks employees. The first journey Stamps or NFTs will be a collection of Starbucks’ history images that include major historical places in the timeline of the coffeehouse chain.

Interested individuals can go to the Starbucks Odyssey waiting list website and click on “join the waitlist”. The platform will email those who are invited to the beta testing of the app. Although Starbucks’ team is being secretive about the number of testers in the loyalty program, they did state however that the number has far exceeded their expectations. The beta version looks simple and easy to use, with a tutorial-like feature that guides users through Journeys and Stamps.

I’m PUMPED to be off and running in the @Starbucks Odyssey program!! And obviously I went with the Bear. Sorry Tiger and Hummingbird people, but the Bear was clearly the right choice.😆

Brands as Catalysts in Web3 Space

Although the NFT market is at its lowest point, entering the bear season and enduring a severe crash in value, world-renowned brands are maybe the thing that holds this community together. However, brands have faced major criticisms for joining the Web3 space. Brands are accused of only being interested in the technology to abuse its profitable aspect, or as a marketing stunt to hype up a certain product. Starbucks here might break this stigma by incorporating blockchain technology as a complimentary expansion of its already-established program. However, we might never know if the coffeehouse giant actually believes in Web3 potential or not. On the bright side, even if brands don’t fully support the blockchain as an emerging technology, they are creating a spike in revenue sales and lifting up a crashing market back on its feet.