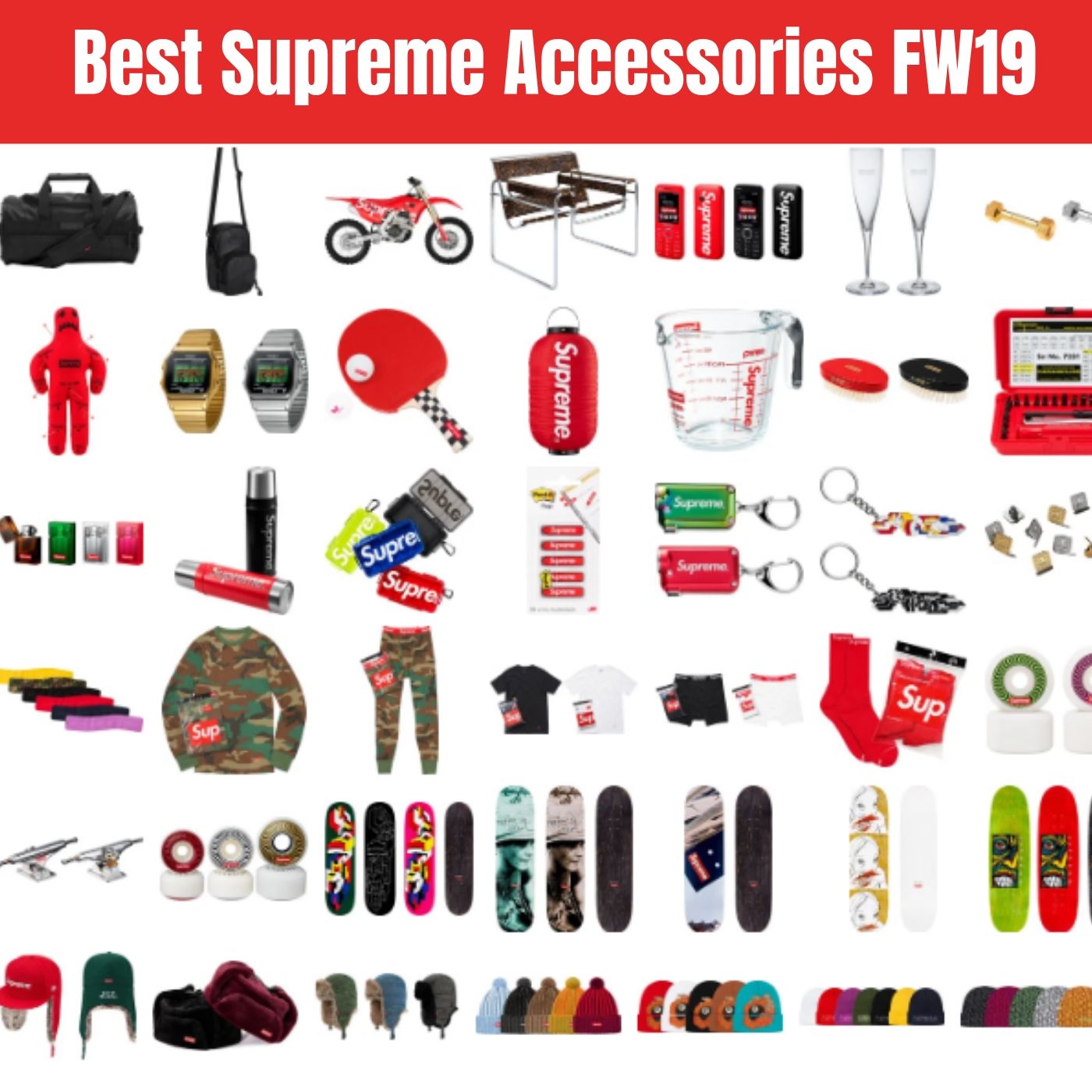 Supreme clothing pieces like shirts, hoodies, pants, and hats are all dope. No one can deny that. They command respect and inflated resale prices. But with every new season, it’s Supreme accessories that fans care about the most. Except when Supreme is releasing a BOGO Sweater or Tee, then they care about the BOGO!
And after a first look at the Supreme FW19 preview, we can say this season is going to break some rules, piggy banks, and hearts. And if you wanna go all in this season, make sure you have a very powerful Supreme Bot. This season looks very hyped, and competition is increasing with every new leak. So get your money and Bot ready for a season to remember. Even if you’re new to the streetwear game, a simple scroll through the Supreme FW19 preview would explain it all. Supreme, with its apparel items and accessories, visits all the red zones and forbidden lands of drugs, sin, and crime. And this new Supreme BLU Burner Phone reflects that vision very well. The only time you’d need a Burner Phone is when you’re up to no good.

In fact, people became especially familiar with burner phones from watching the popular TV series “The Wire”. In this Series, drug dealers used burners to communicate without getting tracked by the police. So, yeah that’s the kinda message you’d be sending copping such Supreme accessories. But if you can flip it for a couple hundred bucks, who cares how owning a Burner Phone sounds?

Remember the toolbox, crowbar, hammer, and bolt cutter? Now a Chapman screwdriver set will join your collection of heavy-duty Supreme accessories. While these tools aren’t everyone’s favorite, they’re highly desired for the potential profit they hold. A valid example would be the $32 crowbar that was sold on StockX for an average of $250. So even if you’re not necessarily a handyman you should prepare to cop this set. To be fair to Supreme and its highly controversial accessories, they do sometimes address less criminal matters, like sports. Actually, Supreme has a long history of collaborating with sportswear and equipment brands. We’ve seen countless collabs with the likes of Wilson, NBA, Everlast, and of course Nike.

This upcoming season, however, Supreme is taking it to another level with 2 5lbs dumbbells. The heavy-weight accessories will come plated in gold and silver. And maybe, just maybe, that’ what was missing. These shiny dumbbells were exactly what you needed to start working your a$$ out. Apart from the heavy-duty tools, and sin-inspired accessories, Supreme has walked down the houseware path a couple of time before. We have seen Supreme Chopsticks in FW17, a soup set in FW16, and the infamous Supreme stacking cups in SS18.

And now, the Supreme FW19 season will add a Pyrex Measuring Cup to your mama’s fancy kitchenware collection. The USA-made glass measuring cup holds a capacity of 500ml and features the Pyrex logo as well as Supreme’s logo on both sides. Supreme’s history with bikes is one worth celebrating. But no Supreme bike has ever reached this level of hype and desirability.
You must remember the Supreme Santa Cruz Bike and Coleman mini bike. But this time it’s different, this collab is as major as Supreme’s work with Louis Vuitton. As part of the Supreme FW19 accessories, the streetwear beast is collaborating wit Honda to drop a one of a kind Dirt bike. You finally got a Bike to match all the gear and accessories you copped before!

We still don’t have a list of retail prices for Supreme FW19 items, but we bet the dirt bike will have the biggest price tag. As for resale, flipping a Supreme bike is out of the question. Flipping is why you cop a Supreme bike in the first place. And with that fine line below the picture saying exclusively made for Supreme, you know it’s gonna limited AF. The only problem with that bike is that for obvious reasons it will probably not release online. Which means copping with a Supreme Bot is not an option and you’ll have to go about it the old Supreme way and camp overnight in front of a store. So far, Supreme has gone into sports, drugs, crime, and sin. But this season, they’re experimenting at a new level, Black Magic! one of the most talked-about Supreme accessories is the Voodoo doll! Although it looks cool and probably good as a collectible, we really don’t know why anyone would want a Voodoo doll in their life. It’s creepy, and the curses are real sick! Yeah go ahead and shoot that flipping for money argument, but wouldn’t the doll get back at you for trading it for cash?

Week 0 of Supreme FW19 will take place on August 22nd, 2019 at London, New York, Los Angeles, and Paris stores. As for the online Fam, Supreme drops will kick off online on Monday, August 26th, 2019 for week 1 and future weekly releases will, as usual, take place on Thursdays.