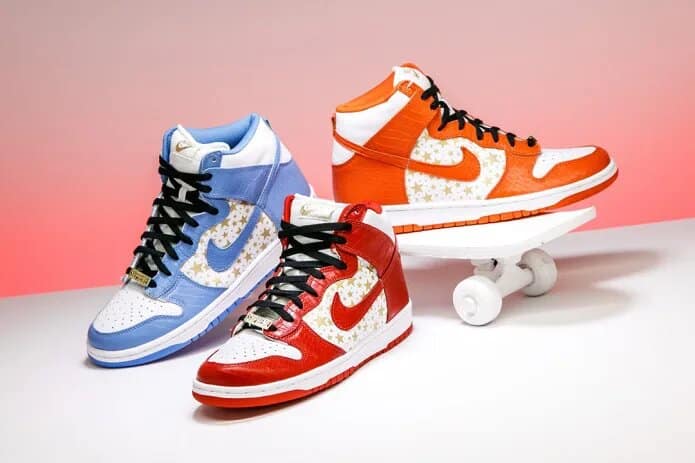 It is a fact that when Nike and Supreme partner up, something good will be cooking. And most of the time, they don’t disappoint. But what we’re gonna discuss today are the sparkly starry Supreme Dunks. Yes, the ones everybody remembers and loves very much. So how are they doing today? And what news do we have about them today?

Wanna see other TBTs like this? Check this out.

The Story Behind 2003’s Supreme Dunks

So after the original 2002 Black Cements, the second collaboration was pretty colorful. The Supreme Dunks dropped in three different colorways: Red, orange, and light blue. The collaboration immediately became highly sought after. The kicks feature a white leather upper with crocodile skin overlays of one of the three colors. The side panels rock sparkly golden stars all over. Finally, a golden Supreme dubrae completes the shiny look. It’s not really surprising that these Supreme Dunks were popular. The drop was a pretty exclusive one with allegedly only 1,000 pairs of each colorway. However, low top Supreme Dunks were dropping alongside the high tops. They came in the same three colorways but featured the Nike logo instead of the gold stars. Unfortunately, this release didn’t happen due to “legal issues” with Nike. That seems to happen a lot with the Oregon giant.

Where Do the Kicks Stand Today?

The kicks were amazingly popular since the day they dropped. However, Supreme Dunks age like fine wine, the older they are, the more they’re worth. And 17 years later, the kicks are worth a bit more than a couple of months’ savings. In 2021 Supreme Dunks Make a Comeback

Well, not a 100% comeback, but close enough to drive us crazy! Different leaks said that the highly coveted Supreme Dunks will drop once again in a low-top cut and more colorways. The design of the kicks stays true to the originals down to the dubrae. So far, the colorways we know will be available are blue, green, brown, and black! Who knows? Supreme always manages to surprise us with more (or less) colorways. One thing is for sure, everyone is feeling the 2003 hype creeping back on them. Some have felt some disappointment towards the latest Nike x Supreme collabs, minus the Air Force 1. So new Supreme Dunks are definitely welcome, especially that 2020 has been a big year for the silhouette. Stay posted on our blog for the latest updates on the collaboration!