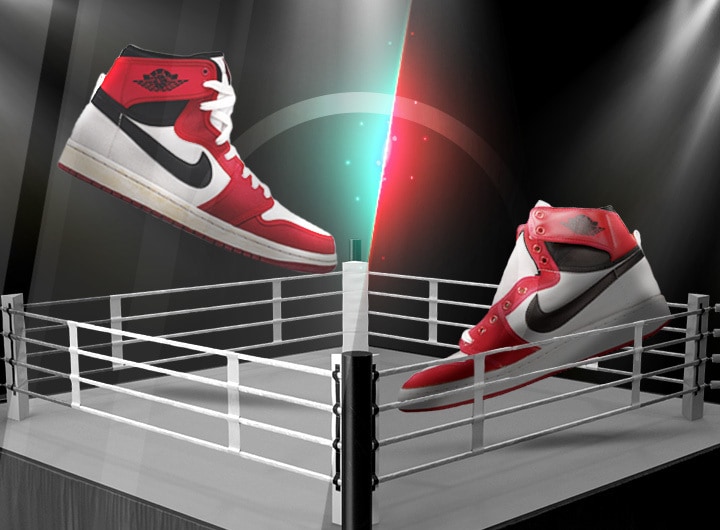 The Jordan 1 KO is one of the most interesting Jordans with the weirdest backstory. A story that is definitely worth talking about today! Especially since we’ve got a lot of AJKOs lined up for this year – including the electric-green AJKO of Billie Eilish!

You see, there’s a lot of talk around how it came to be or WHY they even decided on it. It looks like an AJ1, feels like an AJ1, and has AJ1 in its name; why isn’t it an AJ1? Why the KO? Well, we’re here to figure that out!

As you probably already know, the first-ever Jordan came out in 1985 in the infamous bred colorway! But, what you might not be aware of, the Jordan 1 KO came out a year later in 1986. They named it AJKO and we have absolutely no idea why they decided to do that.

The major difference between the AJKO and the Air Jordan 1 was the material used on their uppers. It featured an upper made entirely of canvas as opposed to the premium leather on the AJ1s. It also replaced the Air Jordan branding on the Wings logo with AJKO branding AND it had Vandal outsoles.

As for the KO, a lot of people speculated that it stands for Knock Out – like in wrestling. Others say it stands for Knock Off. But, there are no official sources to back up these claims. BUT, the strangest part of this all is that the AJKO did not retro until 25 years after it dropped! It retroed for the first time in 2011, again in 2012, and then in 2014. After that, it was basically radio silence until 2021, with the AJKO Chicago release.

Here’s what we think about the Air Jordan 1 KO. You see, budget brands often try to replicate popular models and sell them for lower prices. Kinda like what Walmart did with the fake Foam Runners. But, Nike decided to do that before anyone else could – or, at least, that was the plan! So, the Swoosh created its own knock-off version of the Air Jordan 1.

Is that the real story behind the AJKO? No one will ever know. It will always remain a Jordan with a Twilight-like story behind it.

So, the year 2021 happens to be the year for the Air Jordan 1 KO. It has been a long-awaited moment where the AJKOs finally get their chance to shine! And Nike knows that. We gotta give props to their marketing strategies, that’s for sure. And, lucky for us, we actually have an upcoming AJKO this month! The Air Jordan 1 AJKO Storm Blue.