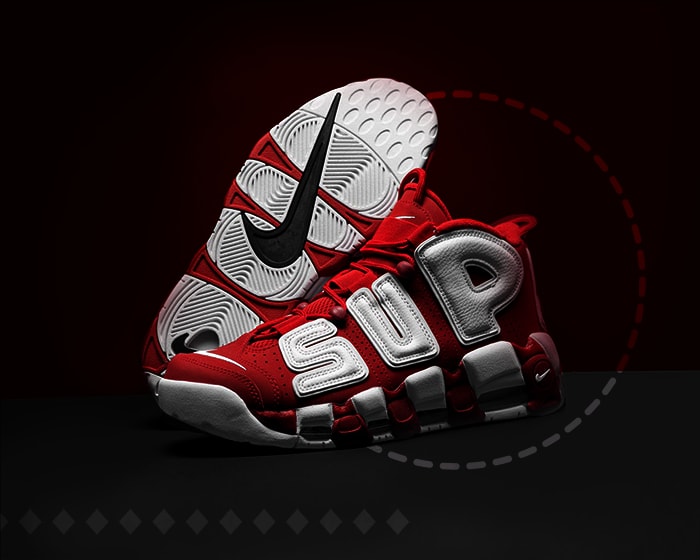 So, for this TBT, we’re going for the story of how Supreme and Nike stole the show of 2017’s All-Star Weekend. The 2017 Nike Uptempo Supreme release is literally on the list of best releases in the history of sneakers. In fact, it’s already impressive when Nike and Supreme join forces on a kick. But, in the case of the upbeat Nike Air Uptempo, or better said, the Nike Suptempo, it was a breathtaking release moment! But, to understand the reason behind the hype release strategy, we have to go back to how it first appeared.

So, the Air More Uptempo silhouette first appeared in 1996. This Nike sneaker has the three-letter statement “AIR” written on its upper. As the three letters hit the midsole, you could actually see a peek of the Air-Sole unit cushioning. This whole “AIR” design refers to graffiti art of the 90’s, which kind of makes sense. Moreover, this bold kick was originally designed for the Bulls star player Scottie Pippen. Hence, Pippen rocked them on many occasions like his fourth NBA title, sixth All-Star Game, and 1996 Olympic gold medal. The Uptempo has had a quiet journey. However, their collab with supreme opened more eyes to how cool these shoes are. And so, they have seen a good strong comeback in recent years. Well, if the dad shoes can make it into the 2021 sneaker trends, so can the Uptempo.

What made this release really hype is the fact that it held very few spoilers and a surprising outbreak. That was we call: Supreme way. In fact, everything changed in the All-Star Weekend games in 2017. And in particular, during the Slam Dunk Contest. So, as the famous players were breaking records, it’s what was on the feet that broke the hearts of sneakerheads. And particularly, the Golden Suptempo that Derrick Jones Dr was wearing at that moment. That way, Nike and Supreme made a fantastic decision to release the kicks how they first appeared, on the court. And if we go back in time, we saw the football star Neymar Jr. rocking those Goldens upon his arrival in Paris. Well, that’s the right way to treat your feet before a fierce FC Barcelona vs PSG game. So, now you know the famous Golden Colorway of the Nike Uptempo Supreme release. But, Supreme designed three colorways. A Varsity Red (the Supreme OG colorway), a Black and a Gold pair. They all feature the same OG construction but with the words “SUP” instead of “AIR”. were all out on April 27, 2017. With an initial retail price of $190, the different color-blocking took different sales paths that all lead to success. The highest resale price is that of the Varsity Red which hit over $1,000. Whereas the black ones are out for around $600 and the gold kicks for $500.

So, what do you think is next for supreme, we witnessed the release of the Supreme Dunks not long ago. And, It seems like Supreme has eyes for the Air Force 1 next. This once again proves that Air Force 1 is a must-have in 2021. But, you can’t have anything if you don’t bring out your A-game with the best bots, best proxies, and best copping in bulk strategies.