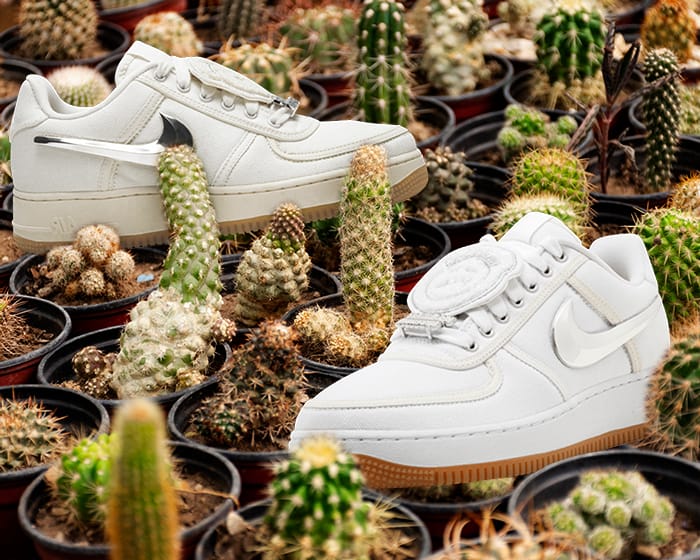 Even a global pandemic can’t kill La Flame’s fire. From last April’s “Astronomical” Fortnite concert, to the release of his single “THE SCOTTS”, to a bunch of cool sneaker drops. Scott proved to be even more of an influential icon amid all what the world has been going through this past year. Travis Scott’s first proper release with Nike went down on the occasion of the AF100 campaign in 2017. If you’re a true sneakerhead, you sure remember the 35th anniversary of the Air Force 1, and particularly the white-on-whites. Why should you remember? Well, for two reasons: One, it was one of the dopest Nike collaborations with few of the coolest artists out there. And two, because it was THE start of a hopefully long relationship between Scott and the “Just Do It” brand. A big winner beginning, all thanks to the legendary Travis Scott Air Force 1.

To celebrate Scott’s upcoming 29th birthday, we thought: Why not throw it back to one of his hottest Nike collaborations EVER? Who doesn’t love a good tbt here? 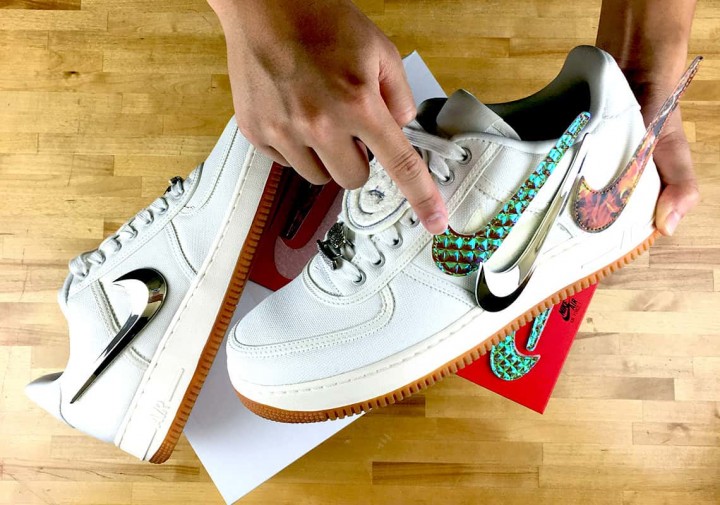 While most releases from that collection didn’t turn out to be big hits, La Flame’s kicks did, BIG TIME! The Travis Scott Air Force 1 in white was the hero of that gang, with a resale value of $1,447 USD, today. Sick! Right?

The pair featured white leather and canvas uppers, white midsoles, and classic gum rubber outsoles. On the heels you can find an embroidered upside-down logo of the Nike Air. Best part about these kicks? They are customizable! Yup! Scott’s take on the 1982 basketball sneaker included removable Swooshes, with three alternate ones that you can switch in and out.

The Swooshes arrived in three variations: the default metallic silver swoosh, a shimmery diamond-patterned set, and a third one with flame graphics. Feels like you copped 3 different kicks. Cool, huh?

These eye-catching touches to good-old classics are what made these shoes unforgettable, and therefore high-priced on the aftermarket. 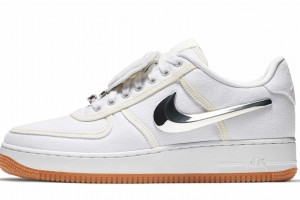 Less than a year later

The Swoosh immediately released a second colorway to the Travis Scott Air Force 1: A “Sail” pair. This time, the silhouette leaned heavily on the “Creamier” color tone. The shade accented the pair’s seams, tooling, laces, and lining. Or in other words: the entire shoe. Gum bottoms were left as is. And the pair was similarly equipped with the same interchangeable Swooshes and Cactus Jack logos. Every detail – other than its color, of course – is exactly the same. 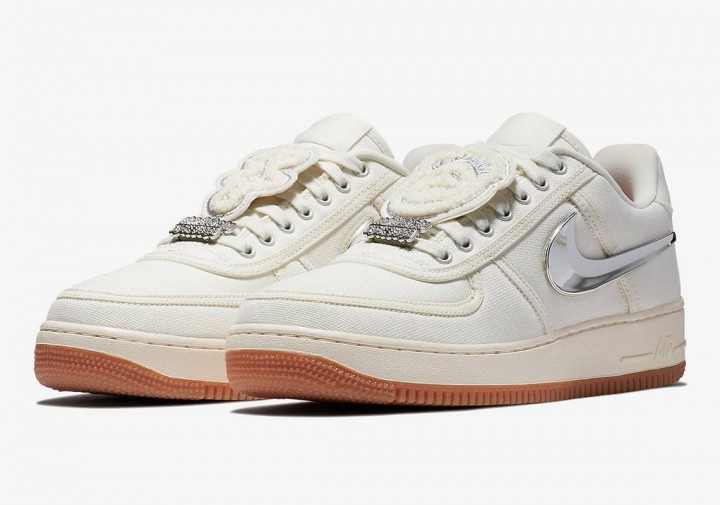 The shoe turned out to be as popular as the AF100 version and gave those who struck out on that one another chance. This pair, though, was a slow seller in terms of resale. Prices of these kicks were stuck in the $300 USD range until the end of 2018. The resale price of the Sail was slightly lower, simply because it dropped in larger quantities than its sister pair. Today, these sneakers are reselling for 1,400$. Living proof that sometimes you gotta hold on tight before flipping. 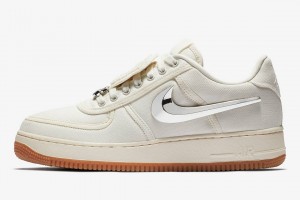 We personally enjoyed this double throwback: One to a past icon, and another to a successful collab of this icon. The AF100 Collection boosted up so much energy in the single most celebrated sneakers in Nike history. That’s pretty much how Travis Scott has been taking over the sneaker world.

Who would’ve thought this 2017 150$ pair would sky-rocket in just a few years? Well, if you’re still hung up on these, you can find them on reselling platforms such as GOAT and Stockx for a starting price of 900$ USD. You can also save some cash and cop a pre-owned pair for $750 USD, the lowest. But do you really want to pay more than double the original price for these AF1s? And then what? Spend your time cleaning them? To save yourself future regrets, just don’t forget to cop such classics next time they come around.

Keep your sneaker bots on and ready for the next drop. There might not be another “Sail”, but it sure is another year of awesome releases. Some by the sneaker industry’s legends, Virgil Abloh and Travis Scott himself! So, make sure you’re ready and know your foot size, or that’ll just be another mourn down the road.