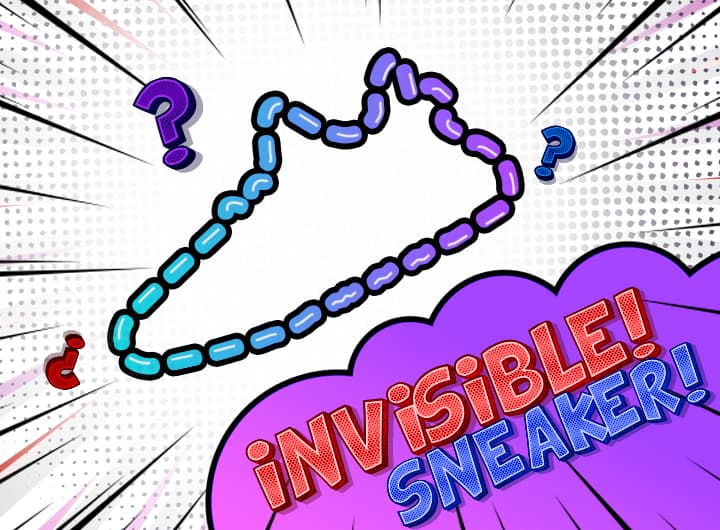 Now, this is a throwback we’re not all too excited to remember. In all honesty, invisible shoes only ever sound cool if you’re attending a royal ball in a giant pumpkin. Other than that, is it really worth it? Especially when we’re talking about a retail price range between $590 – $942? And, who other than Kanye West himself could do something like this and make it sell!

In all honesty, we know that at some point your subconscious decided to bury away this part of Yeezy history. But, let’s jog that memory of yours a bit with two simple words: feet fog. Kim Kardashian and Kanye West – the previous power couple – started the feet fog trend. We get the dad shoe trend, the clogs Foam Runner trend, and we’re on board with wearing slides 24/7. But, FOG FEET? SWEATY TOES? Here’s a throwback to all the iconic invisible shoes we’ve never seen! So, we know that we always LOVE us some good women’s sneakers action. But, sadly these aren’t even sneakers! All of these invisible shoes come from Kanye West’s YEEZY brand of apparel, footwear, and accessories. Let’s get right into them!

Well, if we thought Yeezys are expensive before this, now we KNOW they’re expensive!

These weird invisible shoes are the reason why fog feet became a thing. Every celebrity in the world had a part in marketing these “shoes”. Including every Kardashian and Jenner in the clan! Kanye West is every bit of a marketing genius as ever. Or else, the prospect of getting your toes sweaty and foggy would’ve never have become a thing! This is where we start questioning who makes Yeezys like these!

They’re possibly one of the strangest sneaker trends that have ever become stylish in this industry. Not only that, but they’re kinda a health hazard to your feet! However, these invisible shoes did kickstart clear PVC action in different areas of the industry!

Other Kicks You Can’t SEE

In other areas of the invisible shoes category, we’ve got some kicks we can actually get in on! Nike also had its fair share of clear PVC action featured in the CLOT x Nike Air Max 1 Kiss of Death! It featured transparent TPU perforated toe caps to keep your piggies out in the open!

Also, we’ve got the Off-White x Converse Chuck Taylor as a part of the “Ghosting” set of “The Ten”. It featured a translucent upper with icy blue soles. And that’s a thousand times more epic than completely transparent with your toes out!

But, as a takeaway, we don’t know how you feel about transparent invisible shoes in general. However, if you’re gonna go for transparent kicks, we don’t think you have to spring around a THOUSAND dollars. Let’s go for a movement of no foggy toes in 2022!