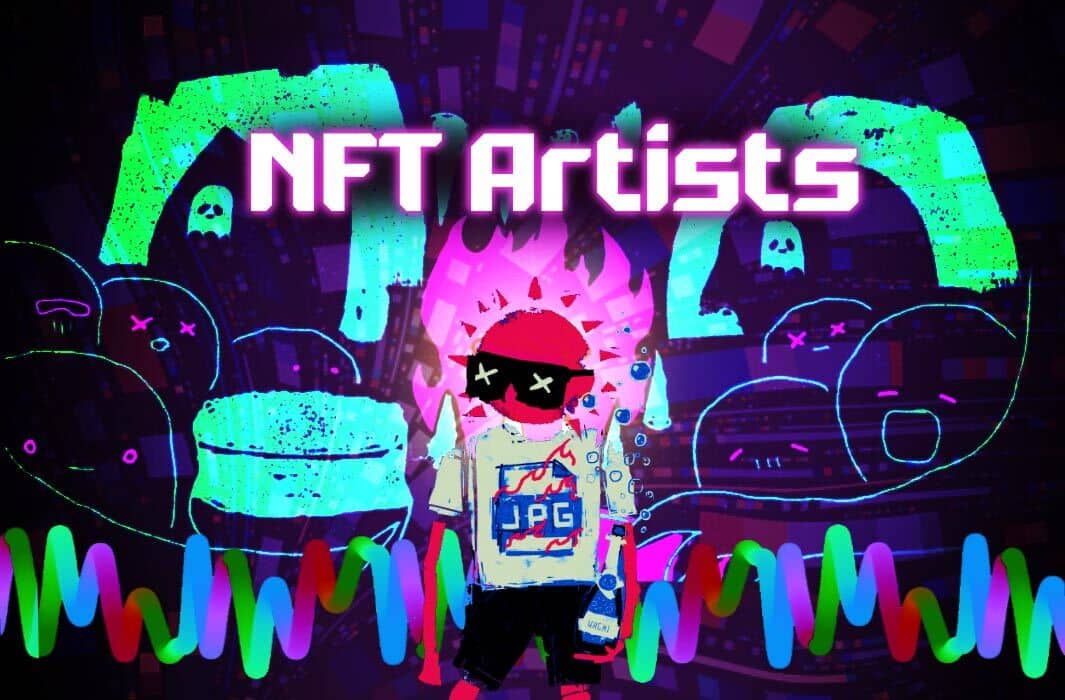 In 2021, NFTs exploded in popularity. Their fandom grew and so did their impact on the world. And recently, all we ever hear about are up-and-rising digital artists in the metaverse. Could any of them become the next DaVinci of our digital time? And who are the OG NFT artists behind some of the elite and insanely-priced art on Web3?

In a nutshell, non-fungible tokens (NFTs) are minted artworks on the blockchain with unique encoding that renders them verifiable and copyrighted. They can literally take the form of anything! A digital art piece, a song, video, even video game elements! Imagine, even fashion designers and car manufacturers are in on the hype!

What defines an NFT Artist?

He is considered a mysterious and enigmatic character in the NFT space. Murat Pak is a pioneer in the digital art and NFT space known for adopting a clean geometric style. Moreover, the artist’s profile picture is seen as a black and white circular image! Pak rejoices in keeping his/her identity hidden to drive attention towards the artwork and away from their personal life. And we respect that!

Prior to late last year, Many of us had not heard of this digital artist . However,the “Merge” collection changed everything. At that time, Beeple, who we’ll be discussing next, was the center of attention.

The Merge collection utilized a brand-new NFT mechanism which allowed investors to buy 266,445 of mass in each unit of their own NFT.  Once your merge kicked off, your mass started combining in your wallet and eventually formed a new larger NFT. The more mass you bought, the larger your merged-mass NFT would appear.

In July 2020, the NFT artist hinted at a mysterious project and investors were not disappointed. More than 28,000 art fanatics, collectors and investors took part in the ‘Merge’. Finally, the auction raised an insane $92 Million. However, some people still argue that the merge is not a single piece of art but a collection.

In March 2021, Mike Winklemen AKA Beeple was hogging the spotlight after his multimillion dollar auction. He works out of South Carolina and was the top NFT artist of 2021. Back at that time, Beeple had already sold 845 artworks for more than $113 Million! Insane!

Furthermore, the star of the show was unquestionably “Everyday: The First 5000 Days” ; it single handedly sold for an astonishing $69 Million on Christie’s Auction house. This piece took 13 years to create and includes 5,000 digital images that required a whole year to put together. And the hustle didn’t stop there!

Then, Beeple again partnered with Christie’s Auction in November and released a new piece called Human ONE which features a lone astronaut walking in a dystopian land. In detail, it sold for a whopping $29 Million. Not too shabby.. Basically, he is one of the wealthiest artists of our time.

He is a London-based well-established digital artist and crypto enthusiast that uses the pseudonym XCopy. In detail, he uses a very distinctive dark and dystopian style. Much of his work screams punkish, so don’t be fooled by the vibrant colors! He dies for depicting skeletons and death! Pun intended.

Overall, he has sold over 9,570 NFT pieces. His super rare piece, All Time High in the City, sold for $1,987,556.80 and appears to show a representation of Charon, the ferryman who brings the souls of the dead across the river Styx to the Underworld. Not dark at all…

He is the legend behind generative NFT art platform ArtBlocks and the iconic Chromie Squiggles!  The rise of this platform witnessed its peak in August 2021, nearly a year after launch. Back then, the sales of projects on Art Blocks started to skyrocket. In detail, according to CryptoSlam, the platform saw a trading volume of over half a billion dollars in that month alone.

Consequently, it was obvious that Art Blocks was onto something game-changing. To put things into perspective, the NFT Artist has sold 7,777 pieces, and his most expensive piece, an edition of his Chromie Squiggle collection, sold for $8,129.59. Gulp..

Born in Texas, Tyler Hobbs is known for his genius generative art collections like Fidenza. This digital artist works primarily with algorithms and paint. The NFT artist has found a lot of success with NFTs. With over 1,018 artworks sold, Hobbs’ highest price tag for “Incomplete Control” snagged an eye-watering $81,227.67. In brief, this piece is all about letting go and allowing room for error and imperfections. Just what we like to hear. Hobbs’ work feeds on the ego of art connoisseurs everywhere! He definitely creates one of a kind pieces.

Fewocious or Victor Langlois is a young bright artist among the elite names. He is one of the youngest NFT millionaires too! The Seattle-based Artist sold his first piece at 17 years old! What?! Following that, he released a series of successful NFT drops and reaped a whopping fortune of $17 Million. Moreover, the NFT artist Langlois describes his artwork as snapshots from his memory and a mirror into his heart. Deep words.

Initially, FEWOCiOUS’ collaboration with RTFKT made it to sneaker and NFT history by selling out in just 7 minutes, generating over $3 million. In addition, his collection, detailing his journey through adolescence, titled “Hello, I’m Victor (FEWOCIOUS) and this is my life” went on sale at Christie’s Auction House in June 2021. This collection literally “Broke” the website. It crashed from all the traffic! They had to reschedule the auction for 2 days later.  The collection sold for just over $2.1 Million.

Known as Gary Vee, the Belarusian-American entrepreneur is initially a creative business investor with a loaded portfolio. Just as loaded as his crypto wallet. And he didn’t shy from hopping on the NFT bandwagon. Now, Gary is not very artistically endowed, but his NFT collection “VeeFriends” makes up for it! In detail, the highest price for one of the NFTs in this collection is a staggering $24,795.

The Bored Ape Yacht Club lit up the internet, but its lead designer, Seneca, was watching from the shadows. The 27 year-old NFT artist is the genius behind the original Bored Ape character.  Imagine, the apes generated more than a billion dollars in the crypto scene. Yet the Asian-American artist gets little credit. We are here to rectify the situation a little bit! In an interview with the Rolling Stones, Seneca stated that BAYC creators compensated her, but according to the Artist, it was “Definitely Not Ideal.

Ever since the NFT craze began, everyone wanted a piece of the action, especially after the auction houses and galleries recognized NFT art as legit. The phenomenon drew traditional artists, celebrities and even people that never made art, becoming one of the fastest-growing asset classes of the year. Who’s your favorite NFT artist to this date?