The 6 Most WTF Supreme Items EVER! 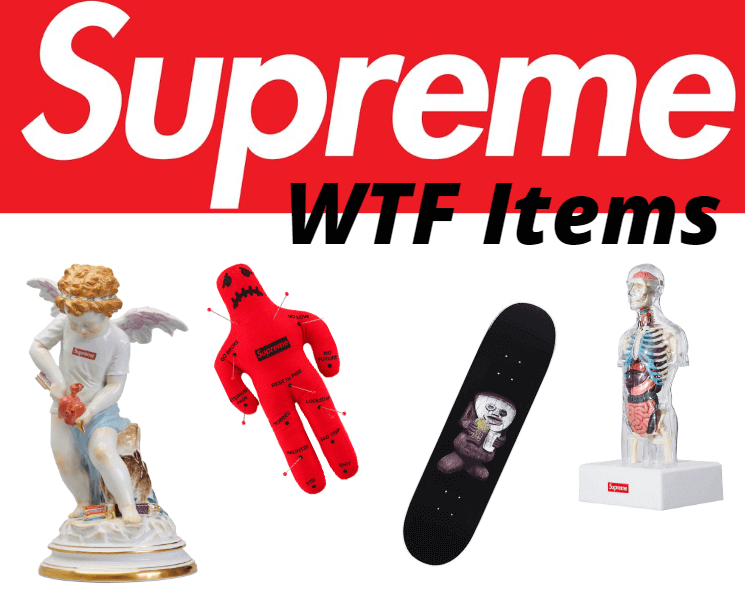 Supreme once was a simple skateboarding shop, but that’s not the case today. The Supreme beast paved its own way from an underground skate shop to a worldwide brand with a limited number of stores across the globe. Just like the brand, Supreme items always have a story to tell.

But before we get into that, let’s look at the brand’s own controversial past!
The Bogo, which is one of the most known logos in the world today is actually “inspired” by Barbara Kruger’s work. The American artist is the original creator of the Futura font in a red box just like her famous piece “I Shop Therefore I Am”. 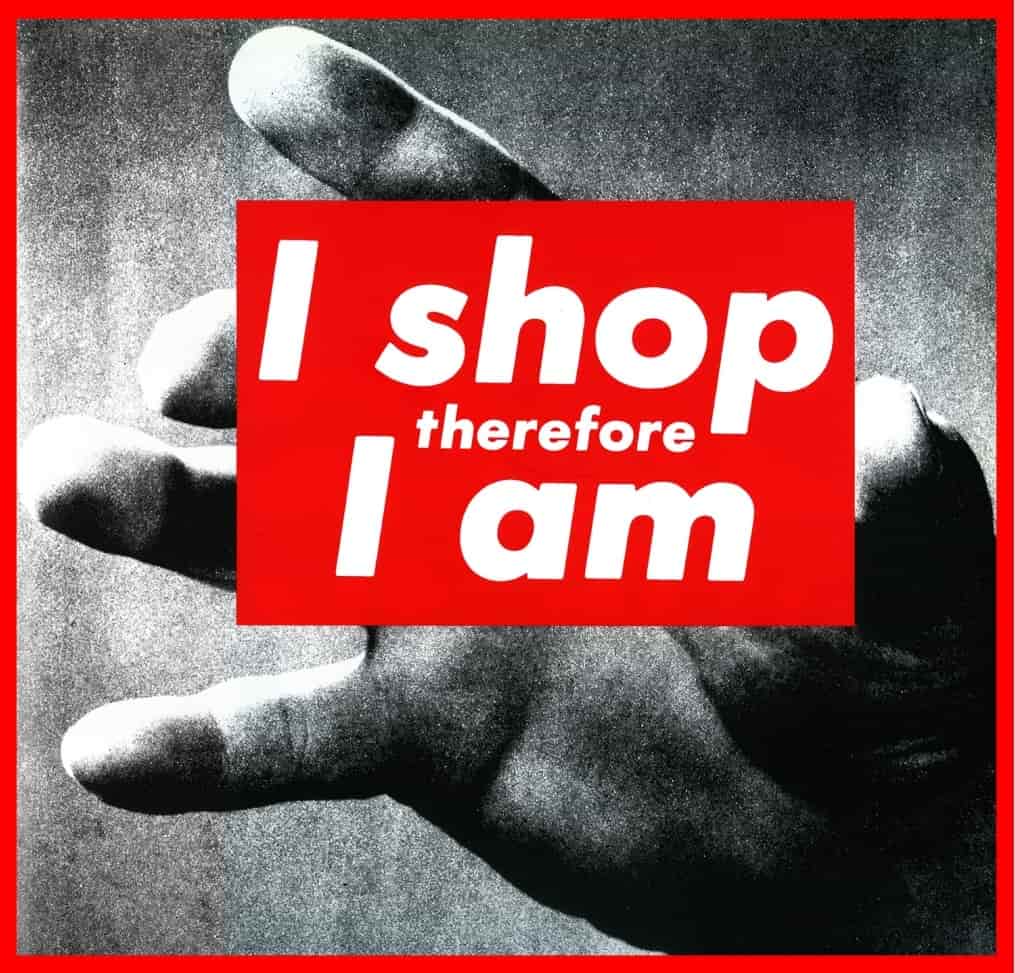 Now, enough with the history, we’ve got a list of six Supreme items that will make you go WTF. We all remember the weird pocket knives, this season’s Post-It flags, burner phones and much much more. But we’ll take a look at other Supreme items, some are very famous and other less noticeable.

Jack and Dinos Chapman, or simply the Chapman Brothers, are visual artists. Their art’s goal is to be offensive and shocking to the audience. And this is probably why Supreme decided to collaborate with them on what I personally consider one of the most shocking Supreme skateboard decks to date. 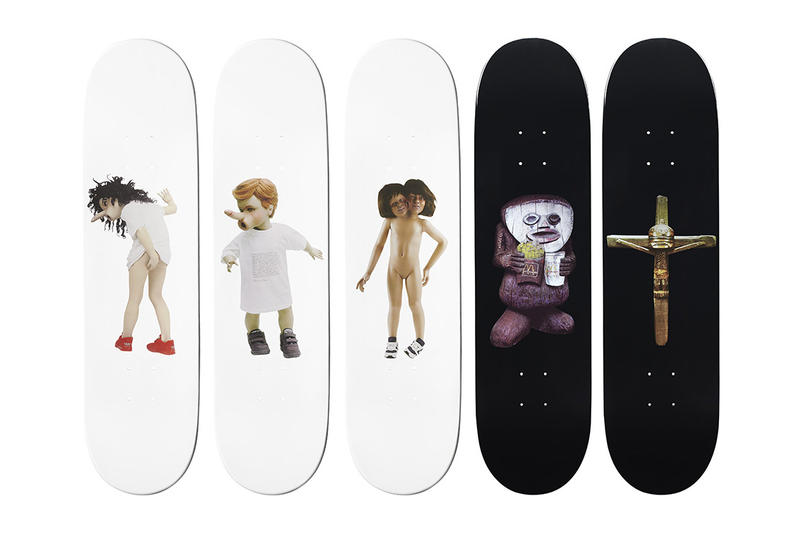 Have you ever seen a brainwashed human? Well now you will! With the human anatomy clear model. You’ll see a Supreme brainwashed male and a woman pregnant with a Supreme baby. So if you’re a Supreme head and a biology teacher or doctor, that’s one of the best Supreme items for you. 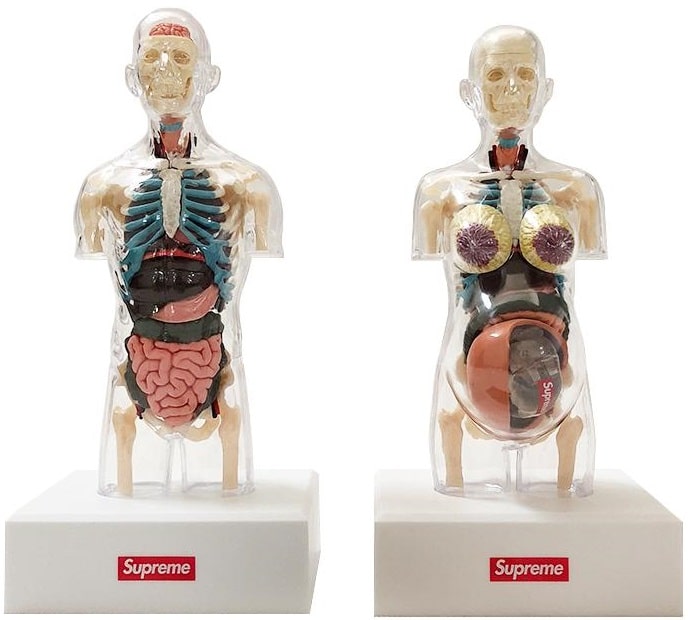 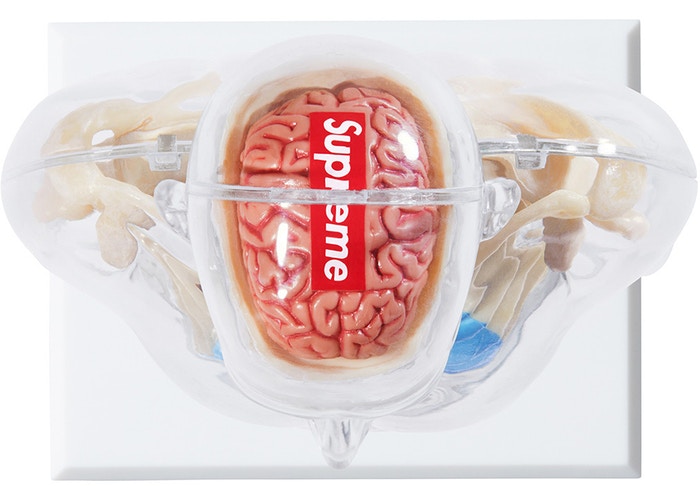 The alphabet vase is actually not the only item of this collection. In the SS18 season, Supreme was going to drop a whole collection of alphabet tees, pants, beach shorts and towels with “Fuck You” subtly placed among the letters, but it didn’t. Why? Because they probably got a lawsuit up their sleeve. The eerie alphabet is actually the work of the Russian-French artist Romain de Tirtoff, or more commonly, Erté. The Supreme items were removed from the lookbook of that season and the resale value of the vase skyrocketed! 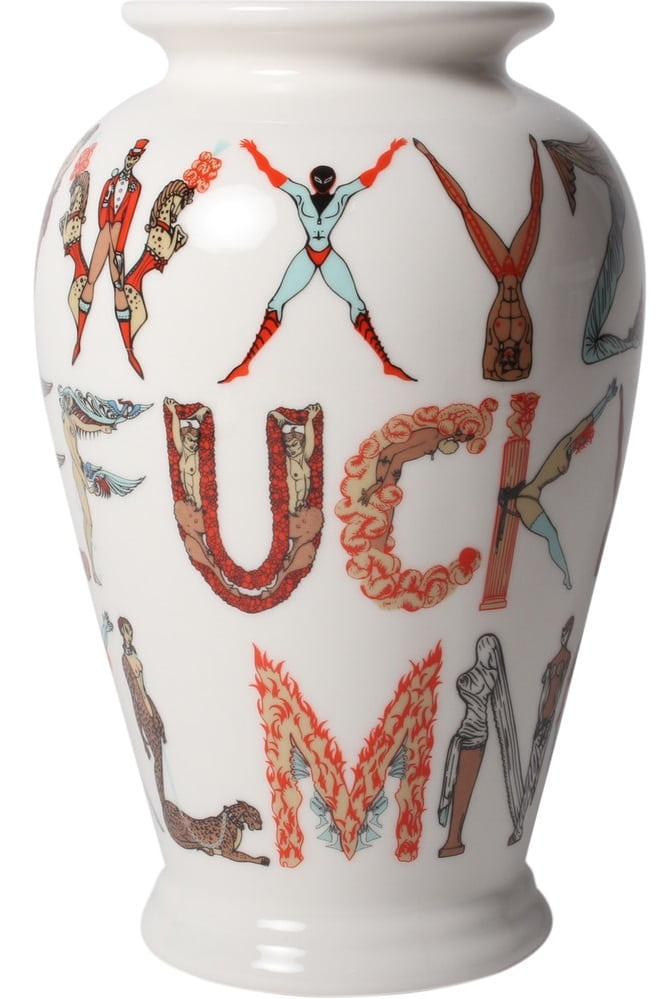 Well, now we can say that we saw Cupid wearing a Supreme Bogo t-shirt. The porcelain figurine is the result of the collaboration between Supreme and Meissen. Meissen is one of the oldest porcelain manufacturers in Germany and Europe generally. So it was a weird mix of classic and street cultures which gave birth to this hip heart-stabbing Cupid. 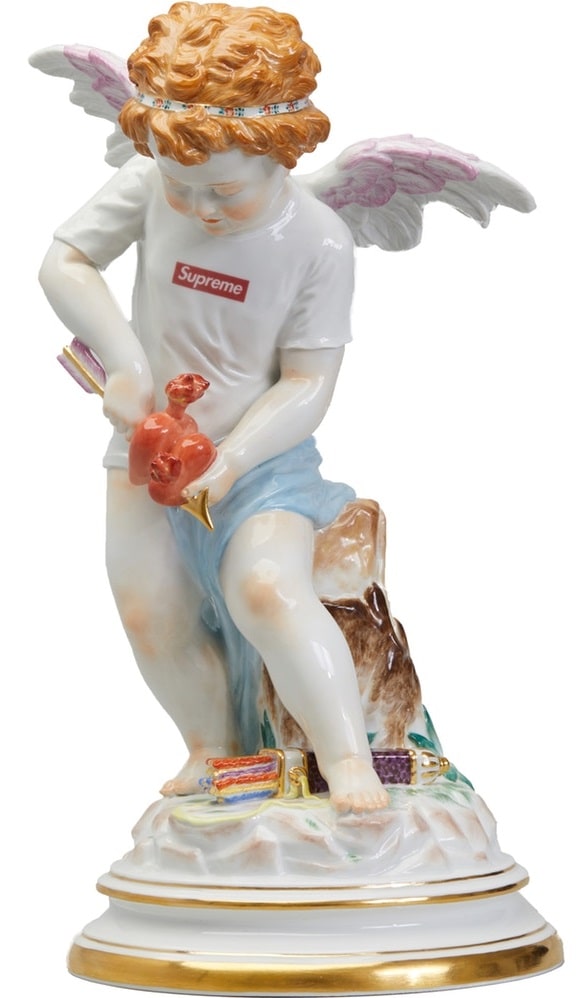 This Cupid is one of the most expensive Supreme items with an average resale price of $7,367

Well.. It is a coffin keychain, but it’s also more than that! It actually opens and has a cigarette holder so it acts as an ashtray at the same time! And this is probably one of the weirdest sentences anyone could ever read. But after all, these are some of the weirdest Supreme items ever. The back of the coffin also has a cursive engraving that says “See You In Hell”. 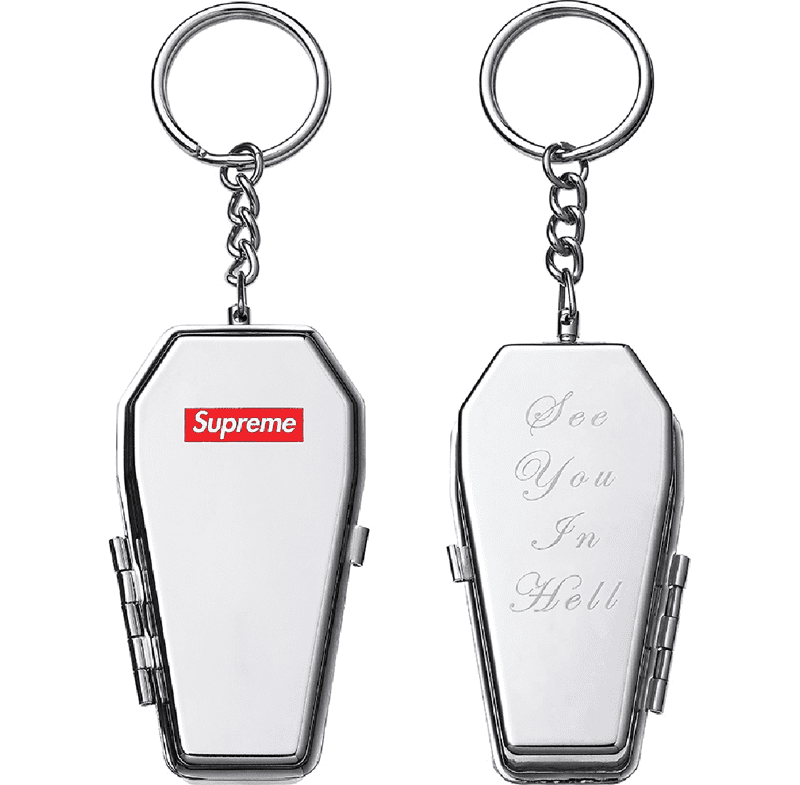 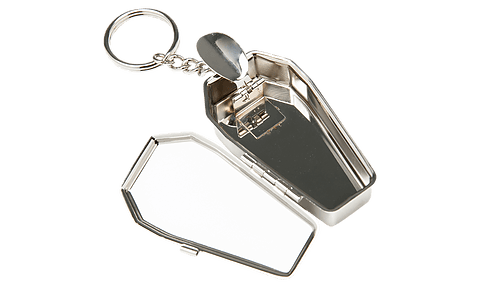 Yes, yes.. A Supreme Voodoo doll. Just when we thought that Supreme cannot surprise us anymore, they go and release one of the creepiest Supreme items ever. With the Supreme Voodoo doll you can wish people you hate as little as being shook or as wild as living in eternal pain. Savage. And the red guy doesn’t seem too happy does he? 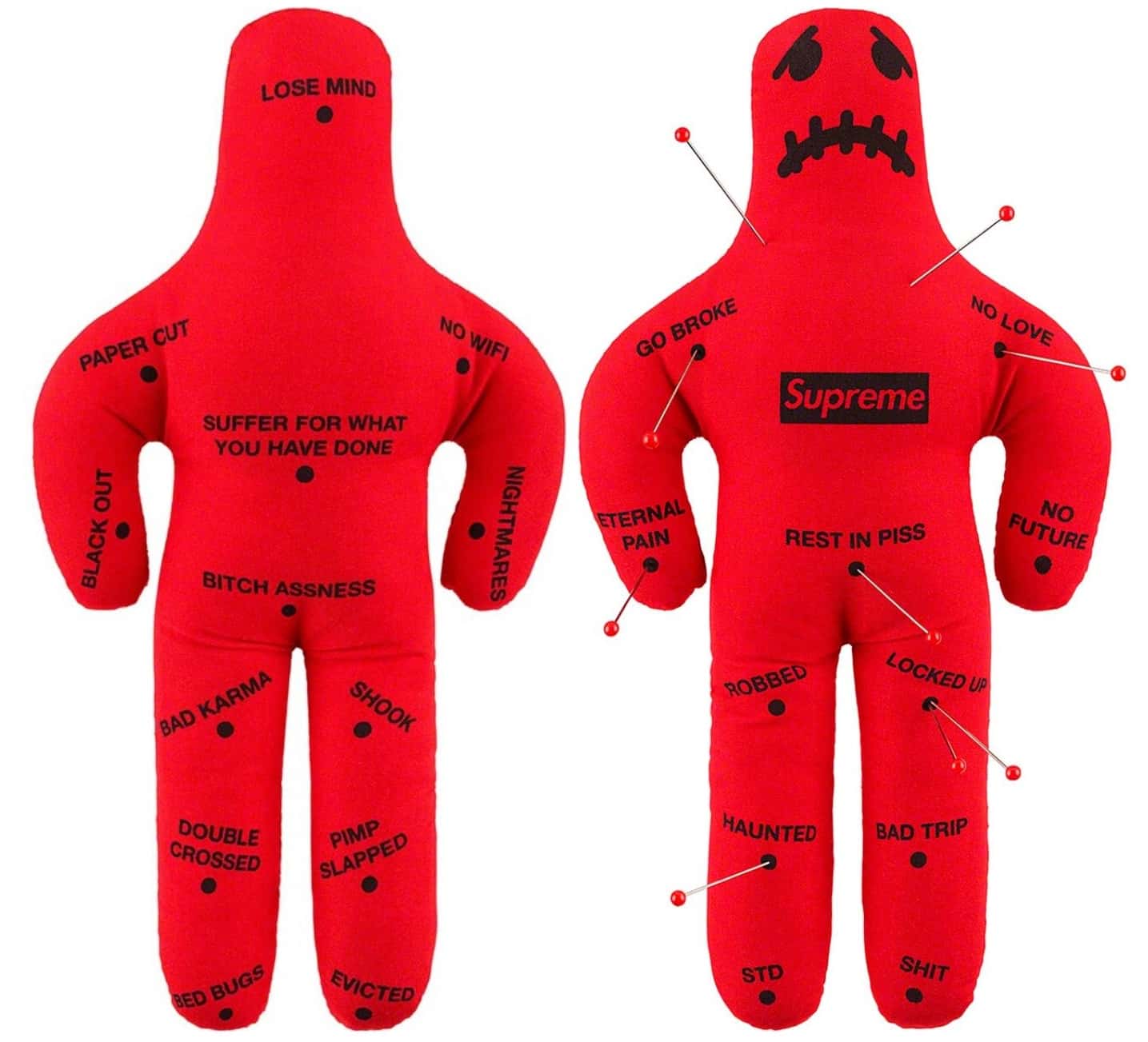 So, you might think you saw the last of supreme’s eccentricity, but booyyy you are so wrong. Supreme items are always the talk of the community whether in a bad or good way. After all, any publicity is good publicity. We should expect more edgy releases in the coming weeks and seasons, because why not?

Let’s not forget, Supreme has been on the market for 25 years now and their popularity is not just due to the nice and pretty designs. It’s because of their controversial designs, the box logo, the collabs. Add to that, the exclusivity factor Supreme uses is a HUGE factor when selling any item, even a brick.

On another, but related note, check out the fanciest Supreme sneakers on the market and the Nike drops calendar for holiday gift ideas!