TBT to When Nike SB Got Everyone Saying: What The Dunk! 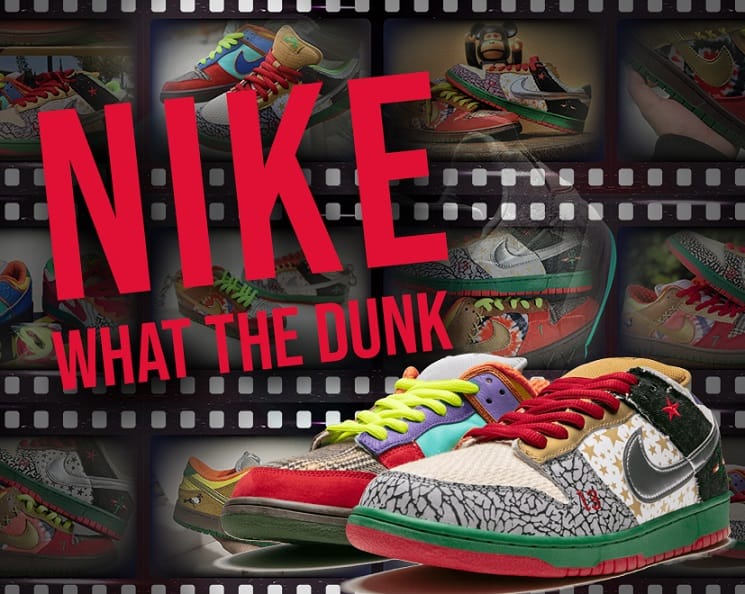 Today, we’re talking about one of the coolest sneakers to ever exist! The amazing What The Dunk Low Pro SB was the mashup of all sneaker mashups! That pair leaves us with so many questions about its inception, value, and how it’s doing today. Let’s not forget that 2020 is turning out to be an amazing year for the Dunks and SBs. Some of the coolest colorways, like Nike Dunk Brazil, are dropping soon. So let’s take a look together at the amazing What The Dunk!

Before the SB Division, We Had Dunks

Our story starts in 1985, with basketball trainers. Three years after the Air Force 1, Nike Dunks dropped the “Be True To Your School Campaign” with 12 colorways for 12 different college basketball teams. Then slowly, but steadily, the kicks started to gain popularity on and off the courts. Fast forward 17 years, Nike launches the SB division dedicated to skateboarding and skaters! And this is what will eventually lead Nike to drop the coolest colorway mashup ever: Nike What The Dunk Low Pro SB!

Nike What The Dunk SB: The Beginning

Before we get into the shoe, we must take a minute to discuss “the man who put the SB in Nike SB” according to Nike it’s: Sandy Bodecker. Legend has it that the SB in Nike SB refers to his initials! And that thanks to Bodecker this line has gained all this hype and success. He gave back to the skateboarding community and gave skaters the pro athletes’ treatment. Under his reign, many popular colorways came to life and created hype like no other! But when Nike SB was working on What The Dunk, they had one goal in sight. They wanted it to be “the Dunk to end all Dunks”.

The Design Behind What The Dunk SB

When you first look at it, you’d think that the kicks are too much. But upon close inspection, you’d appreciate the attention to detail! It’s like artwork, on a pair of sneakers. What The Dunk is what a successful mashup of 31 popular SB colorways looks like! Some of the colorways that were included in the ensign are the Pigeon, Shanghai 1 & 2, Cali, Raygun, Jedi, Supreme Stars and Cements, Avengers, and many other popular colorways!

How Valuable Are They?

The kicks dropped back in October 2007. And though it was a general release, the kicks were extremely rare, and that was enough for What The Dunk to be super valuable. What retailed for $120, currently resells for an average of $6,036! So if you were one of the lucky minorities that managed to get hold of the mighty dunks, you’re sitting on a fortune!

What The Dunk Today

Although it’s been 13 years since the release of the kicks, we can still spot What The Dunk Low Pro SBs occasionally. The last time they surfaced was on the feet of none other than Kylie Jenner. And that left us wondering if Jenner is cooking something with Nike. Well, time will certainly tell! Meanwhile, keep it locked on our blog for the latest sneaker updates and throwbacks!