Who Makes Yeezys: Your Most Burning Questions Answered! 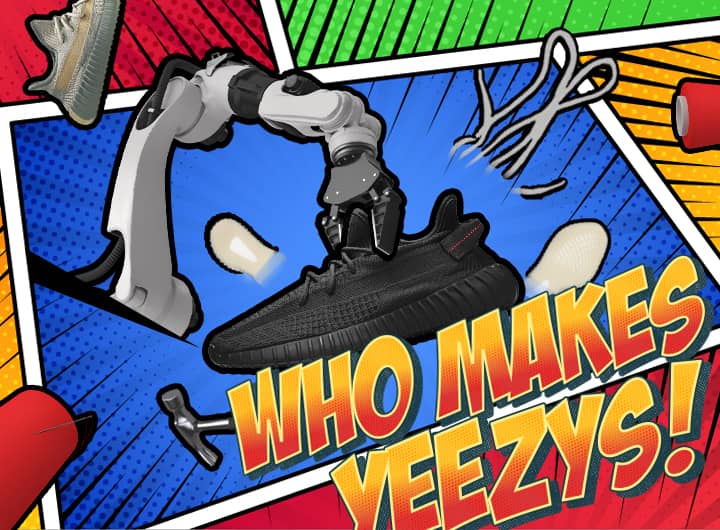 Now, this topic might seem pretty obvious at first! But, there’s never really any harm in looking more into the world of Yeezys! We’ve all got some Yeezy-related burning questions – this question is: who makes Yeezys?

If we’ve wondered where they make Yeezys, shouldn’t we also question WHO makes Yeezys as well? It’s only natural that we find the answers to all the sneakerhead questions we’ve got! Especially all things related to Yeezys. When we think of Yeezys, we think Kanye West. And, when we think of Kanye West, we think of controversy, surprise, and out-of-this-world planning. So, you can’t blame us for asking!

Yeezys remains one of the most sought-after sneakers in the world with the highest sneaker influence. Regardless of all the buzz around them, Yeezys still make a decent amount of money on the resale market. In other words, they are still a freaking HOT commodity! So, yeah, we’re questioning who makes Yeezys? We wanna know.

ALSO, make sure to check out these guides on everything related to Yeezys you might ever need!
– How to repair your YZY sneakers
– How to style and wear them
– When do YZYs drop?
– Best places to buy them from
– How to cop YZY sneakers online
– The complete YZY size guide

After that, Kanye joined ranks with the Three Stripes as the chief sneaker designer on the job. He got so much more control than you would expect in any other collaboration. He participates and manages every part of the process and even shares sketches of upcoming Yeezys!

The word “YEEZY” could refer to either an Adidas sneaker collaboration or to the brief Nike collaboration with Kanye. It also refers to Kanye’s fashion brand of different apparel, footwear, and more!

But, who makes Yeezys look so epic?

Kanye West. He is the brains and muscles behind the design of every Yeezy sneaker to date! He has full creative freedom over the designs. Which, to be honest, explains a LOT about the silhouettes! Especially when we look at the upcoming Yeezy collab with D Rose. He’s KINDA weird, the sneakers are weird! It’s all-in-all a weird sneaker experience.

WHAT Are the Best Yeezy Features

So, now that we know who makes Yeezys, it’s time to get a little bit deeper! We’re gonna talk about the MAKING of Yeezys!

You see, sneaker anatomy can be tricky sometimes! But, definitely not when it comes to Yeezys at all! When you buy Yeezys, you invest in high-quality features, YZY materials,  high-end design, and state-of-the-art sneaker technology! Some of the most defining features that we LOVE about Yeezys include:

WHERE Are Yeezys Made?

So, we’ve established who makes Yeezys. How about where are Yeezys made?

Yeezys are made in China. We’ve actually seen pictures of Kanye at Yeezy factories and in the airport on the way to check on the Yeezy production process. And, they all have a “Made in China” tag on Yeezy sneakers, but not for too long.

Not so long ago, Kanye West announced that he’s planning on moving Yeezy Sneakers’ production to the United States. So, should we be expecting Yeezys to be even MORE expensive in the near future? Well, if it still means getting more Yeezys, it’ll be all worth paying for the quicker and higher-quality service.

How Many Models of Yeezys Are Made?

So, it’s not much about who makes Yeezys as much as HOW MANY models are made. The biggest and most controversial aspect of Yeezy sneakers is the stock level and the design!

How many pairs are dropping next? Will there be a newer, stranger model in the making? How limited are the upcoming reflectives? SO many questions go through your mind when you first know of a new drop. And, for what it’s worth, Yeezys have dropped in million pairs to a couple of thousand pairs per colorway.

We’ve also seen some region-exclusive colorways, and reflective pairs so limited they got us feeling we’re friends & family. But, in terms of models, here are all the Yeezy models we have in existence now:

So, who makes Yeezys so popular? It’s more of a what than a who! In fact, the Yeezy Boost 750 happens to be one of the most popular and rarest Yeezy silhouettes.

Although the Yeezy 750s weren’t the first of Kanye’s sneakers with Adidas, they were the most impactful. And to date, they gotta be among the most hyped and profitable Yeezy sneakers ever! They’ve only ever restocked once in 2019’s Yeezy Day.

The Yeezy 950s feature a classic duck boot silhouette, with key Yeezy design details. The 950 were made with rubber and ballistic nylon, and featured rounded laces and suede-trimmed eye stays.

They are also one of the rarest Yeezy to date. Who makes Yeezys like these so hard to find? Oh yeah. Kanye.

These are the most popular Yeezys in the industry! Everyone wants to start a sneaker collection of all the colors of the 350s!

We’ve got the V1s and the V2s, but both have common features/ These features include the Primeknit uppers, rounded laces, and signature Boost soles. The v2s feature an added semi-transparent side stripe!

After years of waiting, the 3rd iteration of the 350s is here. This is where we question who makes Yeezy mistakes like these! We were supposed to get a purple Yeshaya, but we got an all-white one! We were waiting for a 350 V3, we got the 380s.

These are some of the cheapest Yeezy you can find for sale. And, we’ve got a lot of colorways backing up the silhouette till now!

This is the Yeezy that makes us wonder: who makes Yeezy with or without Boost? What brought the decision to make the 500s without a BOOST?

This was the second time Kanye opted for a bulky dad shoe. But, at a much cheaper price, and without the Boost soles. So, you can only imagine how that went! But, nothing stops Kanye from releasing as many colorways as he desires. And so, we have over a dozen Yeezy 500s to choose from.

First appearing in 2017, the Yeezy 700 was Kanye West’s first step into the world of big bulky boots. And the first experiment with the dad-shoes trend. Not to say this silhouette was not a success. It actually created a GIGANTIC wave in the industry with the Waverunner Yeezy. Kanye loved it so much that he went on to create three different versions of it as well!

Who makes Yeezys for basketball possible? YEEZUS! One of the latest additions to the Yeezy sneakers line is the QUANTUM. Following years of low-top designs, Kanye stepped out of his comfort zone and into releasing the all-new Yeezy Quantum.

The initial release of the Quantums was big- military trucks-big – one of the best marketing strategies out there! And, it paired up with the drop of a basketball version. Mind you they looked so much alike that you needed a GUIDE to tell the difference.

The 2020 Foam Runners were one of those sneakers that really made you ask: WHO makes Yeezys? Because let’s be honest, they were very questionable. They featured algae foam that Kanye grew on his own farm in Wyoming. They looked like clogs. It was all a mess! BUT, this is where he proved his might!

Upon release, EVERYONE wanted to cop a pair of Foamies! So much so that Walmart had to go out and create some Feezys of the model too! Check out the Red October version of the Foamies!

Okay, can we just stop for a moment and think: who makes Yeezy SO damn popular? Or, to be more exact, who made Yeezy slides SO POPULAR? You know what? We blame the pandemic. We blame it for everything, to be honest. But, mostly for the slide.

It’s not that we’re mad that they’re popular, we love them slides and all slide colorways! But, what we’re mad about is paying $200-$400 over retail for a $50 slide!

Other Yeezy models include the Yeezy 450 and the Powerphase. Now, we don’t know about you, but we don’t speak of the Powerphase sneakers here. They’re overpriced Stan Smith sneakers with a weird non-Yeezy vibe.

As for the 450s, they’re pretty DOPE! But, we only have two colorways so far – an all-black Dark slate and an all-white Cloud White. It looks like a pretty alienistic Yeezy – which we dig. This also brings us to the potential Yeezy collab coming.

Now, if you ask us who makes Yeezys like THOSE? We’d say the aliens that are coming to visit soon.

So, to end this on a high note, we’re gonna ask you one last question. Who makes Yeezys so difficult to cop at retail? Well, in short, sneakerheads running some savage sneaker bots. They’re the ones ruling the game and sending YOU to the resale market. Therefore, here’s what we suggest you do. If you’re serious about copping some Yeezy heat, then click on the button below. You’ll understand what you’re doing WRONG!