Brace Yourselves! Yeezy Boost Release Dates for 2020 Are Here! 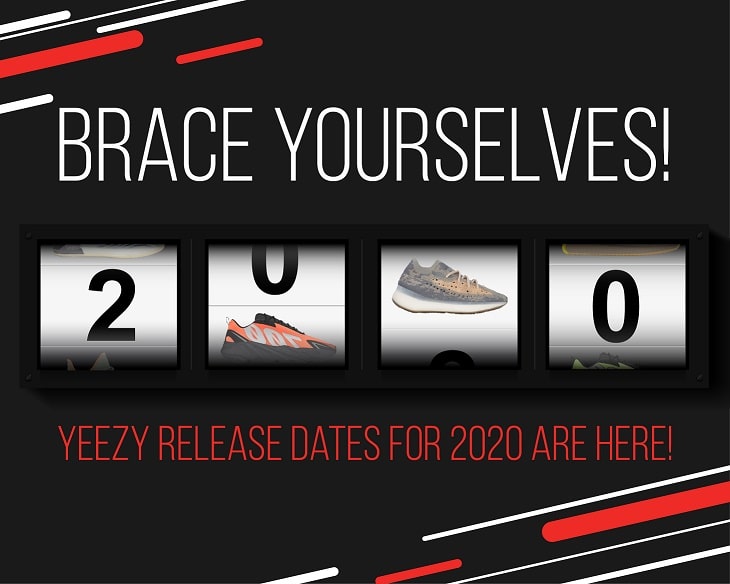 2020… What a glorious year! Let’s take a minute though, to reflect on 2019 and all its amazing Yeezy Boost Releases! And now, it’s time to look at the future and take a look at all the upcoming Yeezy Boost release dates.

The First Yeezy of the decade! Although it’s just another white Yeezy Boost, we can’t ignore the fact that it will be a success. The most interesting thing though is that we’re having two different Yeezy Boost release dates. That’s because the kicks are releasing exclusively in China and then

Following Azael, the newest Yeezy Boost 700 is dropping in an all-black colorway. And just like its white predecessor, the kicks will have a glow in the dark shell. And the Boost midsole is naturally a must! As for resale, it will definitely do well since Azael currently scores on average 2x its initial price.

Let’s face it. Yeezy Boost 380 Alien was a success! A new silhouette and fresh design that registered on every sneakerhead’s radar. In February 2020, a “Mist” colorway is dropping and this time it’s an earth tone. The reflective upper will definitely spice things up too, so keep your eyes on the prize or else you’ll have to buy them from resale platforms for double the price just like the Alien, or more!

We just can never get enough of Yeezy Boost 350s. But we just need new colorways that are not just plain whites or blacks! And that’s what Ye’s hopefully going to give us! We’ve got our eyes on Yeezy Boost 350 Earth and Desert Sage. There are no official Yeezy release dates yet. However, we have pictures!

As far as we know, Yeezy Boost Desert Sage will be a bright pair of sneakers! With a mint Primeknit upper and midsole. The insole, outsole and sock liner though, they’re a popping melon orange. People will definitely go crazy over them once they drop!

On another note, the Earth Yeezy Boost 350 will don a more subdued color of earth brown all over the kicks. But the outsole is a stark yellow that contrasts everything else. However, this is still a mockup, and we hope that we won’t be disappointed with any changes. (Ahem, Yeshaya)

Not very creative, but dead straight to the point! Opting for nylon uppers this time, all these colorways are rumored to release in the spring of 2020. Big year for the 700 silhouette right? The exact Yeezy release dates are not decided yet, and we certainly hope that none of them turn out to be a rumor! As for the retail price, well you’ll be happy to know that the kicks will retail for $220! That’s $80 less than the previous colorways.

Pictures and leaks of the basketball kicks have been circulating in the industry since 2018! The kicks will be available in two versions, hardwood and lifestyle. Why? Well, we wouldn’t be happy to have someone flashing their reflective shoes when we’re hooping, would we? But till now, Adidas did not release any info about when they’re dropping them. However, rumors are saying that the kicks will drop during All-Star Weekend in Chicago, Kanye’s hometown! Let’s hope that’s true!

Or simply, the fancy Crocs! They’re not exactly 100% sneakers, but they’re worth the mention after all the criticism they got. The clogs are partially made from algae (way to be eco-friendly Kanye!) and will retail for $75. Not your normal crocs obviously! As for the exact release date, Adidas and Ye didn’t specify it yet, but it’s going to be out in 2020.

The Yeezy Boost release dates might not all be definitive though! We all know how Yeezys sometimes turn out to be rumors or just samples. And if not, they might simply get postponed. But hopefully, all these issues disappear when Yeezys make the biggest step in their history and move to the US. So, brace yourselves and get your bots up and running, because 2020 will be one heck of a year!